Something amazing is happening at Khimki (even by Khimki standards). During the World Cup, a lot of things happened that you might not have noticed.

• Khimki became the only RPL club to hold its first training camp back in December. Rinat Bilyaletdinov entered the headquarters of Spartak Gogniev, and the first comment of the ex-coach of Rubin and Loko was eloquent: “It is still unknown [for what I will be responsible]. We will sit down at the training camp and talk about who is responsible for which sector.”

It looks like they talked – now, as the insider Sergei Iliev notes, at the second training camp in Turkey, it is Bilyaletdinov who does all the coaching work, because Gogniev in Russia receives a certificate of a Pro license.

• Many key players did not go to the first training camp. Among them are Denis Glushakov, Reziuan Mirzov, Dmitry Tikhiy, Ilya Kukharchuk, Ilya Lantratov, Yegor Danilkin, Alexander Filin, Ilya Kamyshev, Artem Yuran (well, he is not the main one, but he also did not go). Someone – because of debts, someone – not only because of them (the amount of debt, according to Match TV, decreased from 300 to 150 million rubles by the end of the year).

• The names of potential newcomers who flashed at the first training camp are hardly familiar to you: Lamar Walker, Oleg Koshkosh, Oleg Dzantiev, Christian Tovar, Alimardon Shukurov, Lev Skvortsov, Marat Yshyg. If you know any of them, you are amazing. Let’s just add that there were a lot of players from the doubles of Khimki and Alania at the training camp. Yshyg is just one of them.

• By the second training camp, the situation had not cleared up: Lantratov was sold to Lokomotiv, Kamyshev terminated the contract (but is still listed in the application), but defenders Danilkin, Filin, Nikitin, Bozhenov, Yuran Jr. reserve), midfielders Glushakov, Kukharchuk and Zuev were not taken to the second training camp in Turkey. 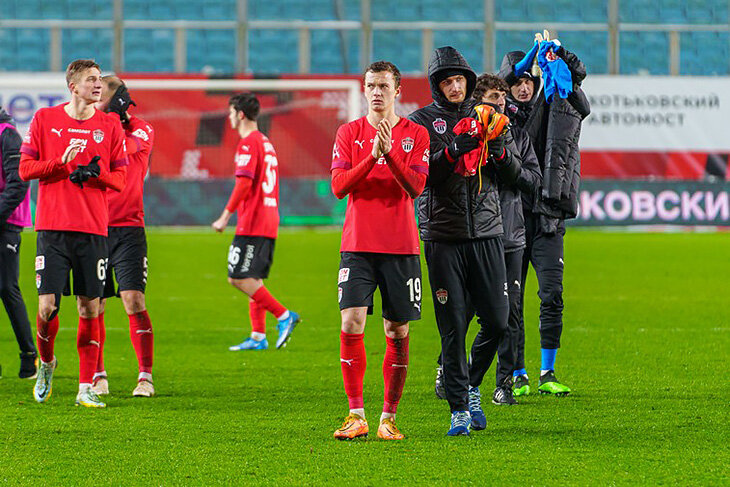 • In total – by the second training camp Khimki lost 11 players from the application. eleven! Whole team. Moreover, everyone, with the exception of the younger Juran, fully claimed a place in the start/cage at the beginning of the season. From the current application, if we take into account all the insiders, only 17 people remain. Particularly impressive is the choice of defense: two goalkeepers and four defenders.

Kukharchuk will almost certainly go to Torpedo – he has already been rejected, like Lantratova. Muscovites are also interested in Dmitry Tikhim, but there will be other contenders for him. And yes, there are sure to be others.

Who trains in Khimki now is a mystery

The media wrote that Khimki wanted to rent Vladislav Galkin from Dynamo (one match in the RPL – so while his girlfriend, who appeared in Comment. Bigi , is still more popular), David Kobesov from Pari NN (with Gogniev is familiar with him from Alania) and Sergey Borodin from Krasnodar.

At the same time, Khimki is partisanly silent about who is at the training camp in Turkey. The club did not even announce the preliminary composition, there is no talk of newcomers. On the official website and in communities in social networks, only congratulations on the holidays and a couple of interviews – even Ilya Lantratov’s departure to Loko has not yet been written, although he changed the club three days ago.