What is this “Super GT” of yours anyway?

It is Japan’s premier motorsport championship, founded in 1993, formerly known as the JGTC. This is a mixture of Formula 1 and endurance racing.

The distance of the race varies from 300 to 1000 kilometers, and two classes of cars perform in the race itself: GT500 and GT300. In the crew of one silhouette prototype, two pilots ride, who replace each other along the distance, and during pit stops, in addition to changing tires, they carry out refueling. 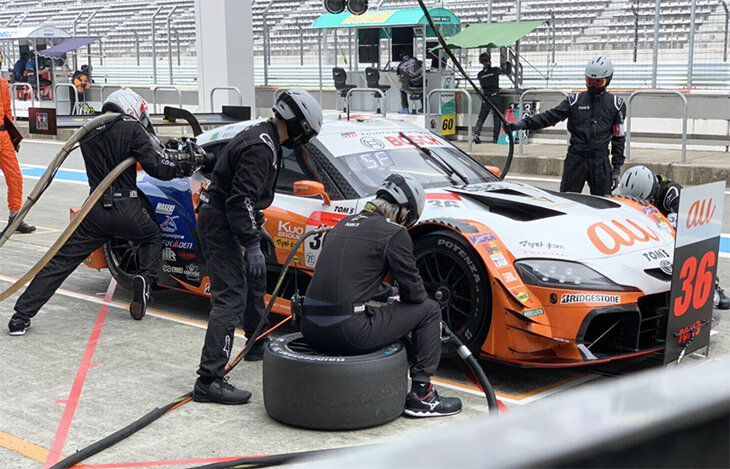 The most attentive readers may already have noticed some similarities between the cars from the DTM and the Super GT, and this is no accident. Both championships almost always went side by side and for a long time made attempts to unite. In 2020, the organizers of both championships adopted the Class 1 regulations, unifying some of the components, but even here the different approach of the championships was reflected. If the DTM tried to unify as many parts as possible and prohibit the refinement of fireballs during the season to combat inflated budgets, the Japanese, on the contrary, reserved the right to modify their cars.

“We have completely different cultures. In DTM, they invest in advertising and the sales department, while our manufacturers want to spend resources on the development of technology,” Masaaki Bando, Super GT promoter.

The result of this sad “association” is known to many. No attempts to limit budgets helped DTM, and in the same 2020, he restarted again, abandoning Class 1 and switching to simpler GT3 vehicles. And all rights to the regulations passed into the hands of the Japanese. 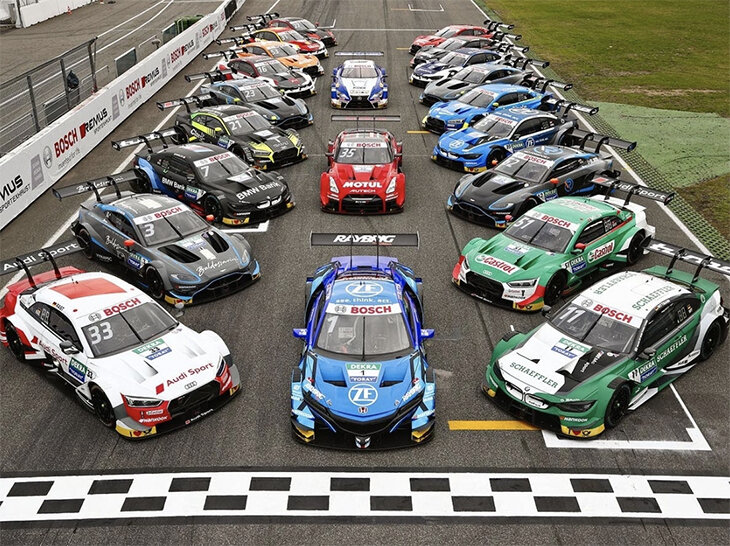 So why is it still worth joining the world of Japanese racing? Now let’s talk about it!

As mentioned above, there are two classes of cars in the Super GT. The GT500 are silhouette prototypes built according to the “Class 1 + Alpha” regulations, i.e. with the same modifications. These are the fastest closed-wheel cars in the world.

Japan’s three largest automakers compete in this class: Nissan, Toyota/Lexus and Honda. Thanks to the regulations, the silhouettes are generally very recognizable, despite the fact that, in fact, optics and shape remain from the car here at best. 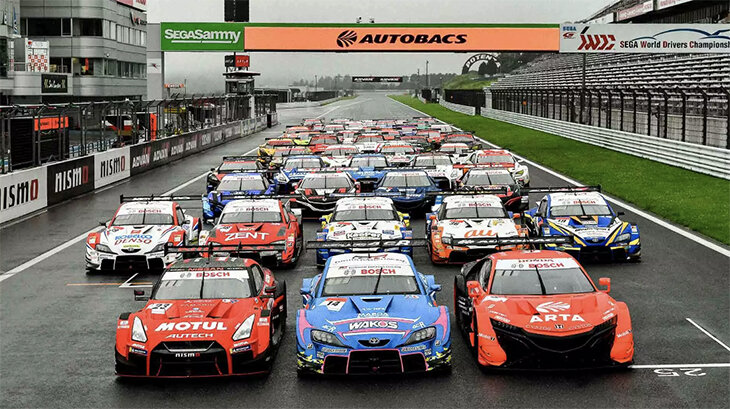 Looking at such cars is much more pleasant and understandable to an ordinary person than behind the prototypes from LMP2 or LMH, which perform in endurance races and have nothing to do with road cars. 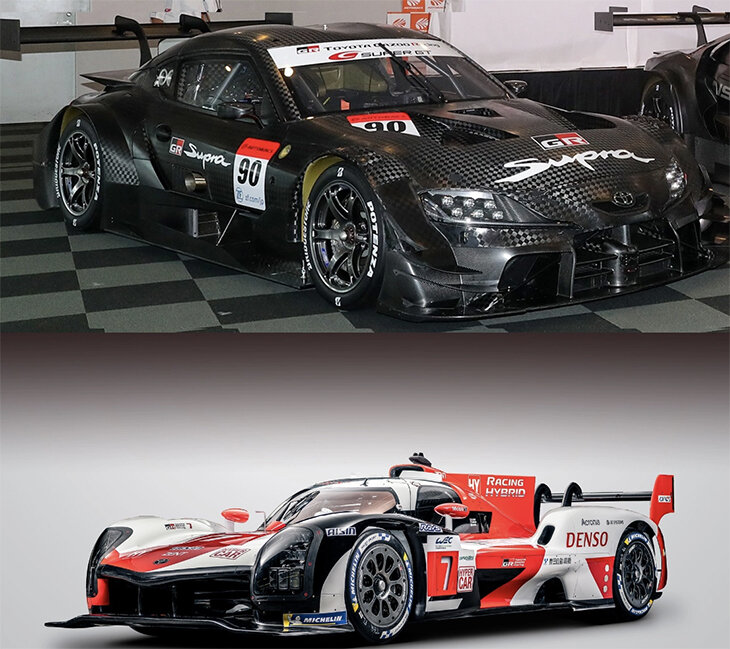 With the GT300 class, things are a bit more complicated. There are already three subclasses that are fighting each other: GT3, JAF GT 300 and JAF GT 300 (MC).

There is no point in talking about GT3 – this is the most massive racing class in the world. But the rest of the subclasses are already a feature of the “Super GT”. JAF 300 is the most expensive silhouette prototypes, which are completely designed according to the regulations of the Japanese Auto Federation. Such machines are very difficult to manufacture and therefore only factory teams participate in this class.

The JAF MC are cheaper and more standardized silhouette prototypes that use the same monocoques and engines, which cuts the budget to build such a car significantly.

All these cars also have similarities with the factory ones, but that’s not the only thing that makes them so attractive.

The “Super GT” has a lot of freedom in terms of the appearance of the car. There are no obligatory coloring elements in liveries, in GT3 it is not necessary to use only homologated wheels for a specific model. And just, apparently, the Japanese have a very well-developed sense of beauty. You yourself look at this: 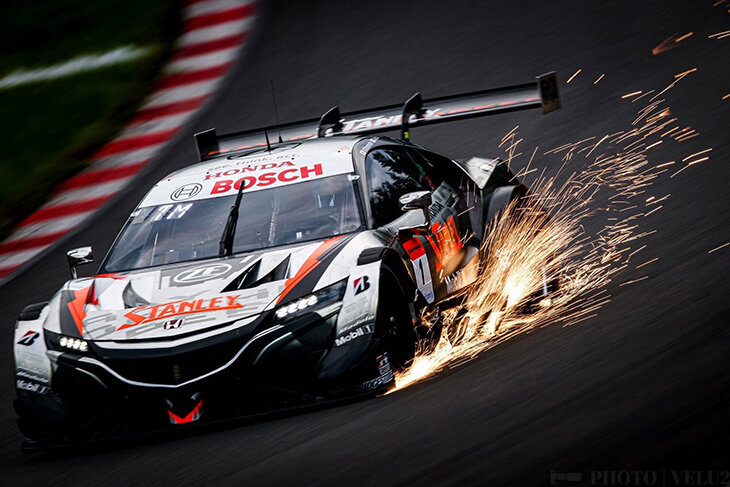 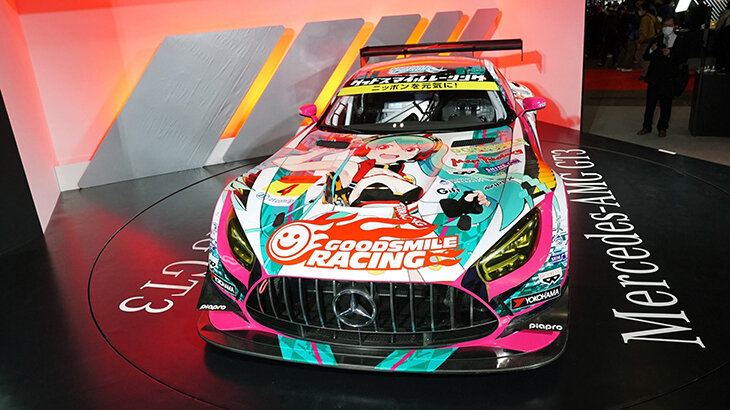 This is the old school you are looking for

The current motorsport has become too sleek, politicized and unified, but not in the Land of the Rising Sun. Tough fight between pilots, no team tactics, the least possible unification of cars, tire wars and no DRS or its analogues, which turned overtaking into a usual lead on the straights.

I just don’t see the point in talking about how many juicy overtakings there are. It’s better to see it for yourself. Drive into YouTube – SuperGt highlights – and go. But what allows pilots to fight each other like that? Of course, technology. And here she is truly unique.

As in Formula 1, real design wars are developing here. Each engineering bureau is trying to squeeze out the maximum possible to win. Sophisticated and developed aerodynamics, constant refinement of the motor. About the latter, it is worth noting separately that these four-cylinder monsters give out 700 hp each. on regular gasoline and without any hybrid installations. The approach of all manufacturers is different, and therefore the advantage often changes hands depending on the track. 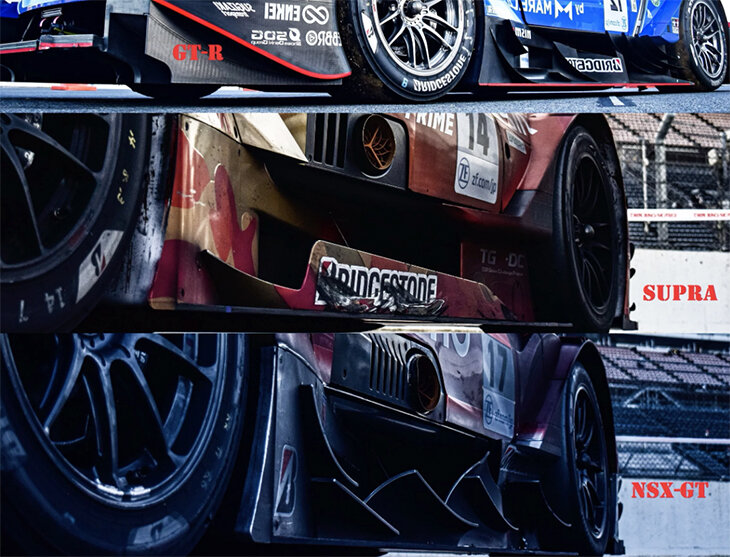 Differences in GT500 side channel aerodynamics

In addition, the choice of tire manufacturer also plays a huge role. Super GT has four suppliers: Michelin, Bridgestone, Yokohama and Dunlop. And each of the manufacturers is trying to give its customers the best tire for every race, because a lot can depend on this. Yes, tire manufacturers do prepare different compounds for each track and each crew. 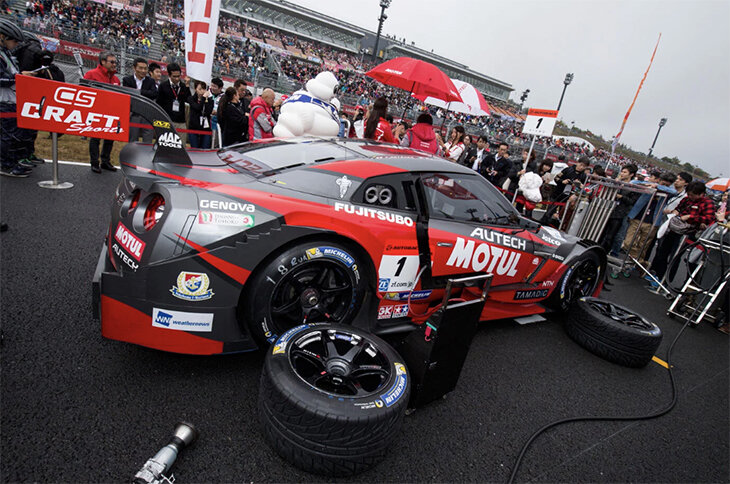 Well, the third, no less important element of the struggle is tactics. At pit stops, it is not allowed to change all four wheels, and you need to calculate how much to add fuel. After all, if you miss, you can lose not only victory in the race, but also in the championship. 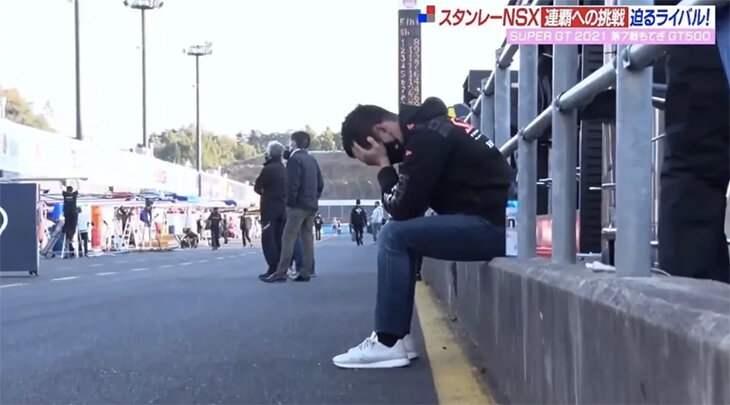 The bitterness of defeat

All this together gives a constant struggle, and often the fate of the title is decided in the last race.

In no case should we forget about those who are behind everything – these are, of course, people. One of the reasons why Formula 1 is so popular is that it’s much easier to keep track of 20 gladiators and find a driver to follow and empathize with. This is why many GT races seem a little faceless, as it will be very difficult for a beginner to choose a favorite among the 120-180 drivers that participate in the race. But not here.

Yes, there are two pilots per car, but there are only 15 cars in the GT500. And since the GT500 is the highest level of Japanese motorsport, there are almost no stray people here. In addition to former Formula 1 drivers such as Button and Kovalainen, such mastodons of Japanese motorsport as Komui Kobayashi, Kazuki Nakajima, Keiichi Tsuchiya (yes, the same one) and many others participated in the championship.

Unfortunately, due to covid restrictions, the number of Europeans in Super GT is declining. Button left after the 2019 season, Heikki Kovalainen leaves the series due to the fact that he had to stay in Japan all the time. But this does not mean that there is no one else to follow there. 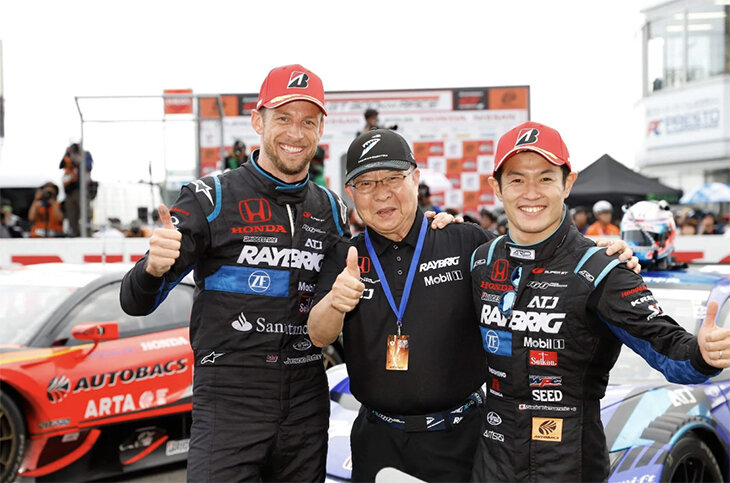 You can pay attention to the two-time champion Naoki Yamamoto, who, together with Jenson Button, was able to win his first title in 2018 and fought for the championship this year until the last laps. And what is the story of Noba Taniguchi, who went from a street racer to a three-time Super GT champion. He still drives the recognizable “anime” Mercedes GT3. And these are just a couple of examples. No length of text is enough for everyone, because there is Giuliano Alesi, who will drive for the championship Toyota, Formula Renault and Japanese Formula 3 champion Sasha Fenestras, GT300 champion Juan Paulo de Oliveira and a lot of other great racers .

In general, there is someone to cheer for! 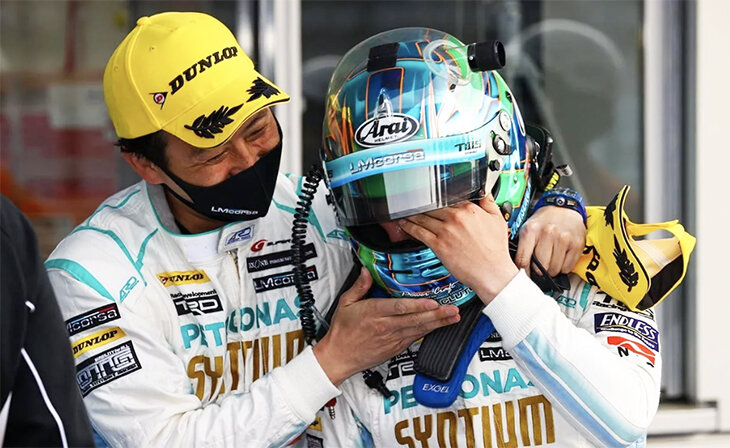 Well, have you been persuaded?

It should be understood that all this is just the tip of the iceberg, as in any motorsport. And if you are interested, you will find a lot of interesting little things there that provide food for analysis and only stir up interest in what is happening.

By next season, Toyota and Honda will update the cars, and Nissan will replace the old GT-R with a completely new Z-tuck, so the alignment of forces may change again. 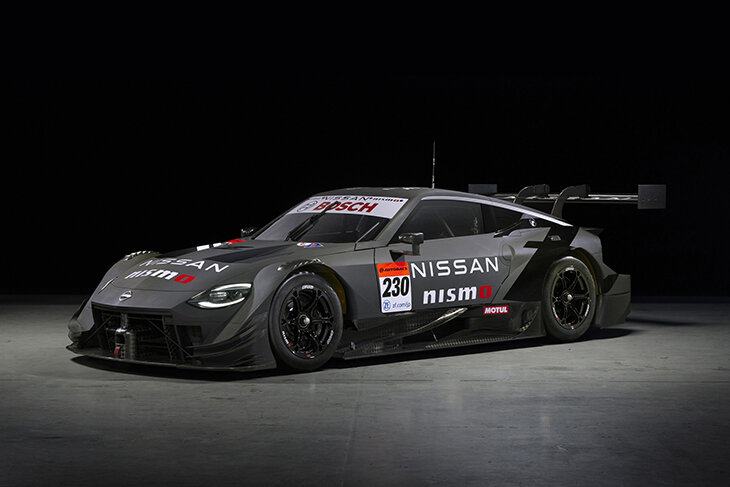 It will be possible to follow the development of the season from April 14 on Motorsport.TV with Russian-language comments or on other resources with English commentators. You can also watch the recording of the 2021 and 2022 seasons on Motorsport.TV or find English-language race replays.