This post was written by a Sports.ru user , every fan can start writing (you can do it here ).

Griezmann began his career at Real Sociedad as a winger. During the 2013-14 La Liga season, he scored 16 goals. He was being hunted by many of the European elite at the time, and it was Atlético Madrid who paid his release, which was rumored to be around 30 million euros. It was during his time in Madrid that Griezmann began to play in midfield.

In his five years at Atlético, Griezmann averaged 19 goals in La Liga and 27 goals in all competitions. He flourished as a second striker, playing alongside the more traditional centre-forward.

France took inspiration from Simeone’s 4-4-2 formation, and Didier Deschamps used Griezmann in a similar way, teaming him with Olivier Giroud at Euro 2016. The Europeans went all the way to the final before losing to Portugal. It was used again in Russia at the 2018 World Cup when Griezmann helped France win. His four-goal comeback could only be worse than Harry Kane (6), the Golden Boot winner. 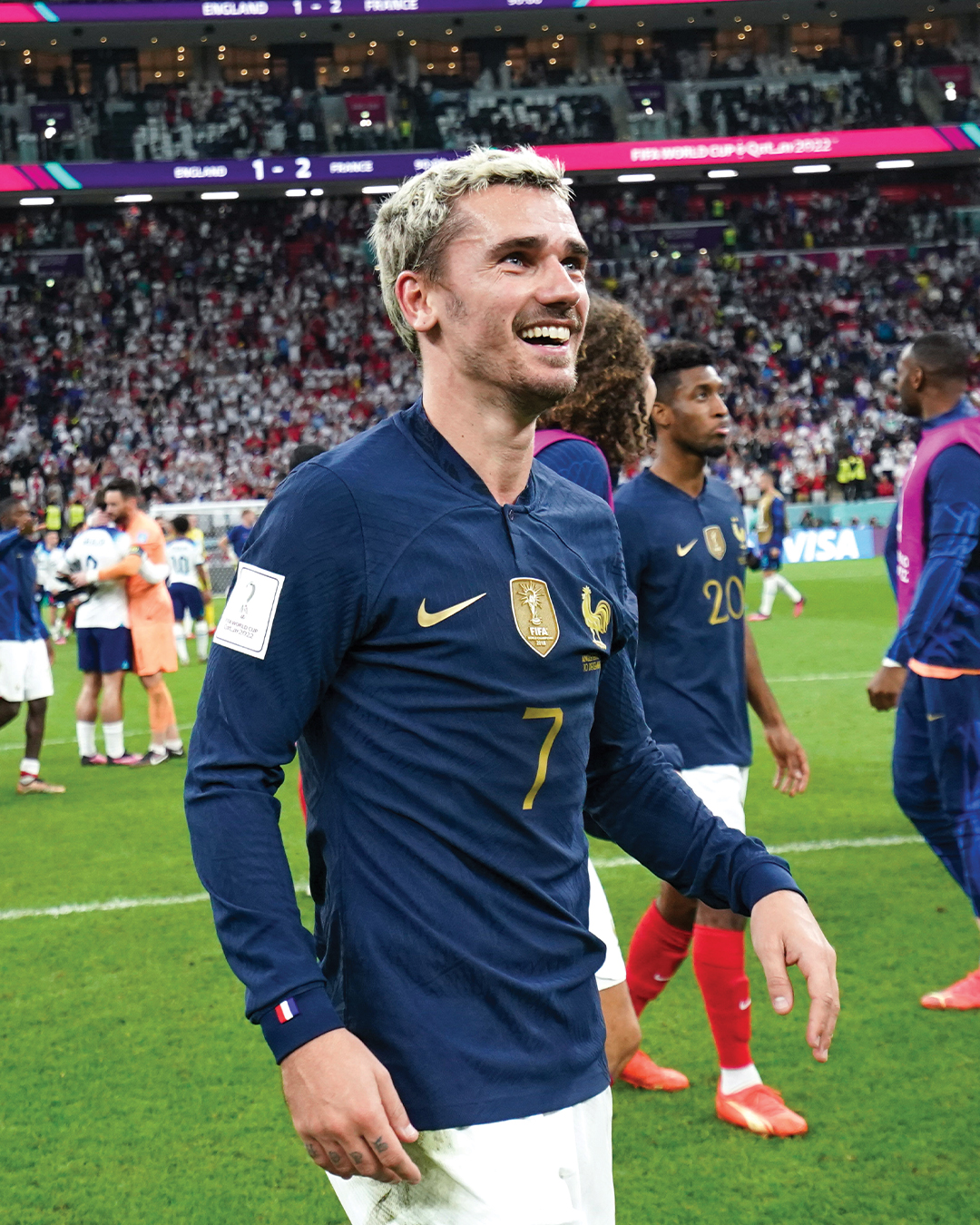 Then he was an integral element, but now he is perhaps even more important to Deschamps. The 31-year-old showed his best result in the semi-final of the World Cup, defeating Morocco, and tomorrow he will face Argentina in the final.

Griezmann didn’t score or provide an assist in a 2-0 win, in fact he hasn’t scored yet at the 2022 World Cup, but he played a significant role in the first moment. His pass into the box caused a panic that was never really realized and Theo Hernandez was only able to acrobaticly score his second goal for France. 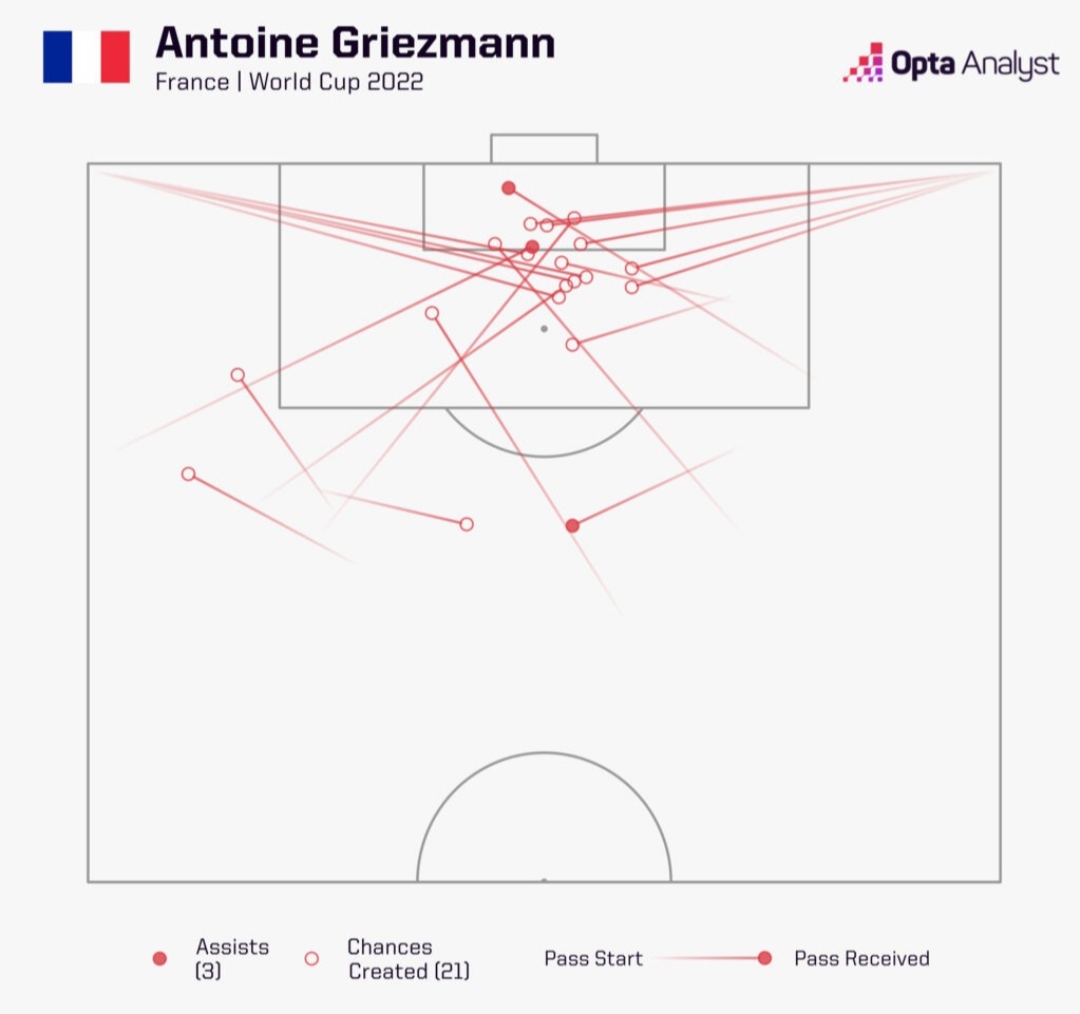 Griezmann created four chances against Morocco, twice as many as the next highest player (Kylian Mbappé).

Having excelled as a goalscorer, Griezmann has now taken on a more creative role with his national team. Unable to call out the injured duo of Paul Pogba and N’Golo Kante, Deschamps has engaged his No. 7 in a deeper role that allows him to pull the strings while also showing off his work-rate.

He certainly makes the most of this opportunity. Griezmann leads the tournament in chances created (21), assists (3) and assists expected (3.54). Only one French player created more chances in a single World Cup than Griezmann’s 21, and Alain Giresse created 24 chances in 1982 and 24 again in 1986.

The Atlético Madrid striker is one of only four players to have created more than three xA chances in the World Cup. He appears on this exclusive list along with Maradona, Johan Cruyff (3.23) and Xavi (3.19). 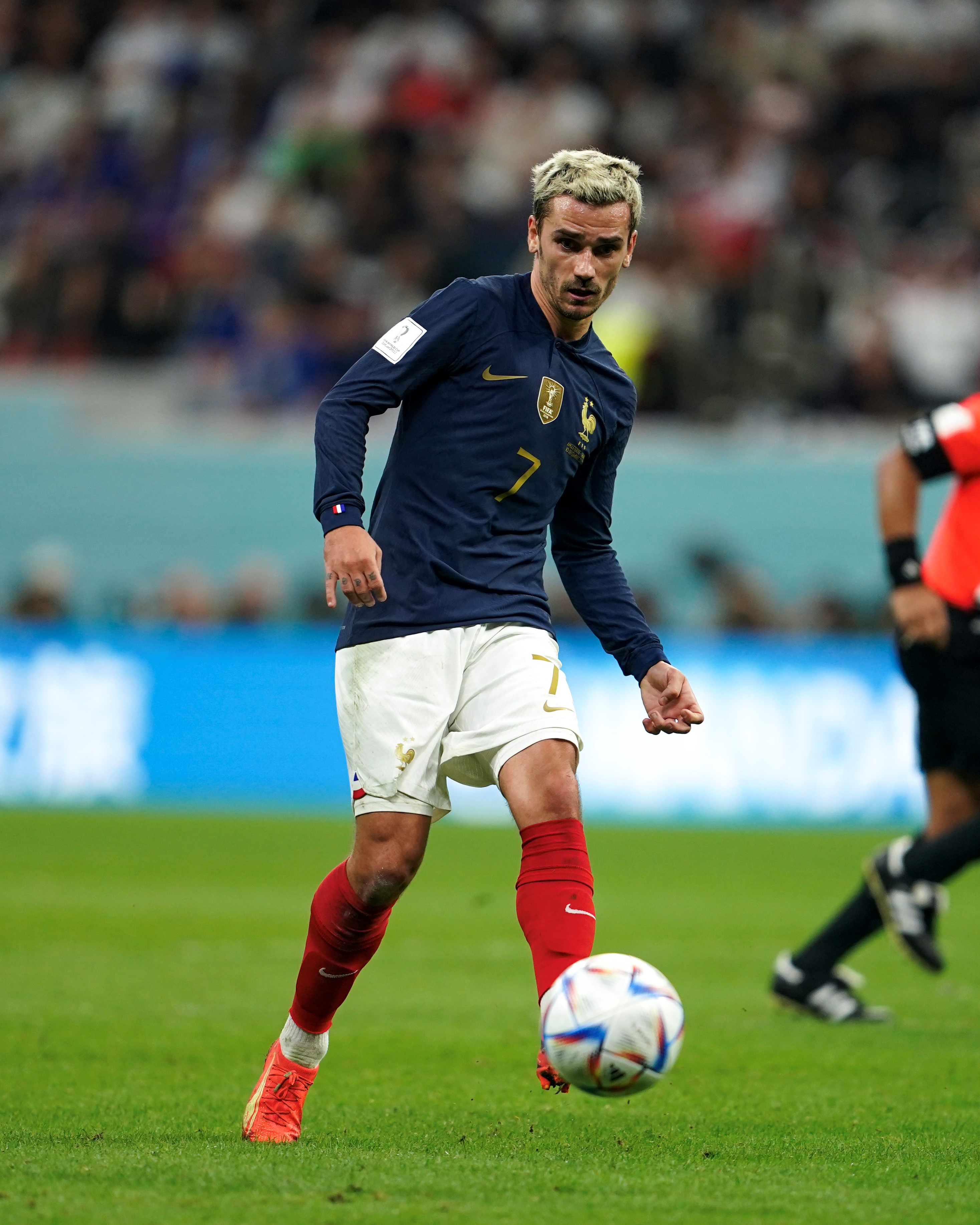 Speaking last week, the former Real Sociedad striker spoke about his new role with the national team: “I am completely free in this new role. I have to be the link between defense and attackers. I have three players in front of me [Mbappé, Giroud and Ousmane Dembele], so more options, it’s easier for me.”

It might be easier on paper, but he still needs to make the most of those moments, and that’s exactly what Griezmann is doing. There was a really good example of this against Morocco. 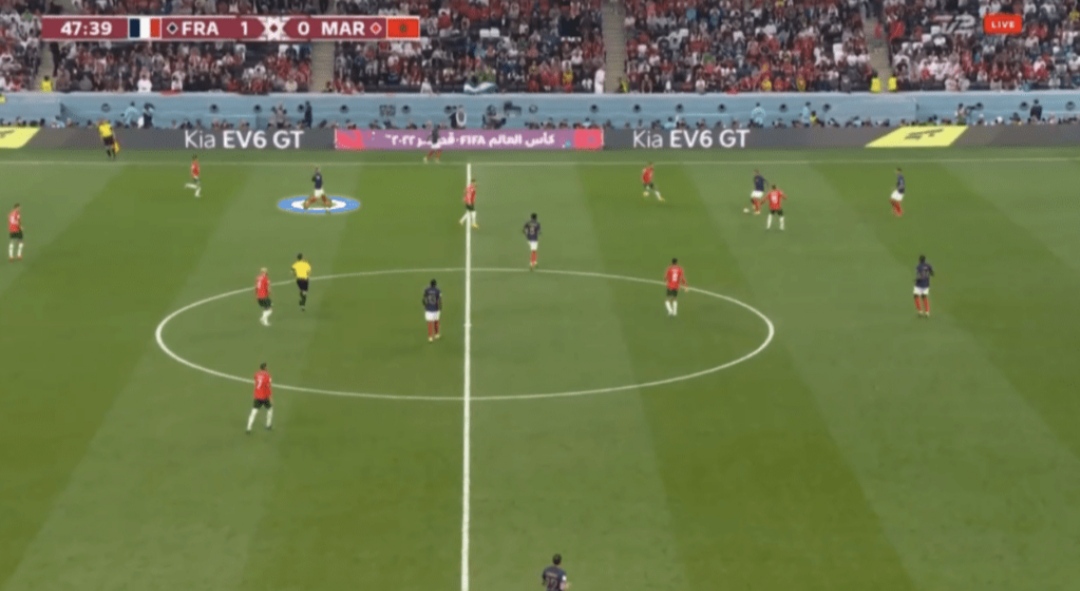 As France tries to play from behind, Griezmann (circled above) is taking the opportunity to overload that particular part of the pitch. By positioning himself on the right flank, he does not give the left center back the opportunity to block a potential pass on Dembele on the touchline. The Moroccan defender is also unable to attack Griezmann due to the threat from the right winger.

As soon as the ball is given towards Aurelien Chuameny, Griezmann goes to the center of the field. 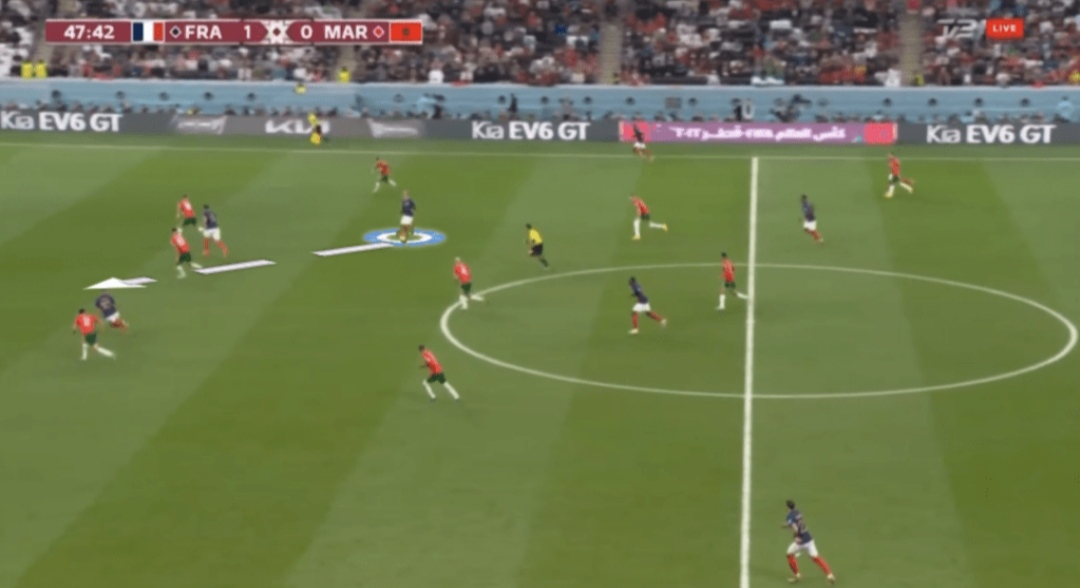 He can then pass to Mbappé, bringing the PSG striker forward towards the net. Unfortunately for France, Ashraf Hakimi manages to do enough to stop his teammate from doubling the lead, but the opportunity came as a result of Griezmann being in a dangerous position to create an opportunity.

The 31-year-old is one of three players who have participated in 30 or more strikes in World Cup 22 games. Only Lionel Messi (43) and Mbappe (45) are bigger.

Similarly, Mbappe (23) and Messi (19) are the only two players to create more chances in the 2022 World Cup matches. He’s keeping up with two possibly the strongest players in the world right now, and he’s doing it from the position he really started playing in at the start of this season for Atlético.

One of the best ways to visualize the difference in Griezmann’s role from the 2018 World Cup compared to this is by comparing his touch map in open play. He makes fewer touches on the left side of the field and gets the ball much more often in the middle and in defense.

The Frenchman is praised by many football legends such as Didier Drogba: “Antoine Griezmann surprised me, but he has the intelligence and qualities to do it. He looks more like Kante than Griezmann!”

Alan Shearer: “He’s a super talent, a really smart player who reads the game very well. When you think about the players they lost, he and Aurélien Chouameni did a great job.”

France concede an average of just 0.83 goals per 90 minutes at this World Cup, only slightly more than the 0.66 they conceded to the final in 2018. Although Pogba and Kante were in this team, this team is almost in line with the past average. 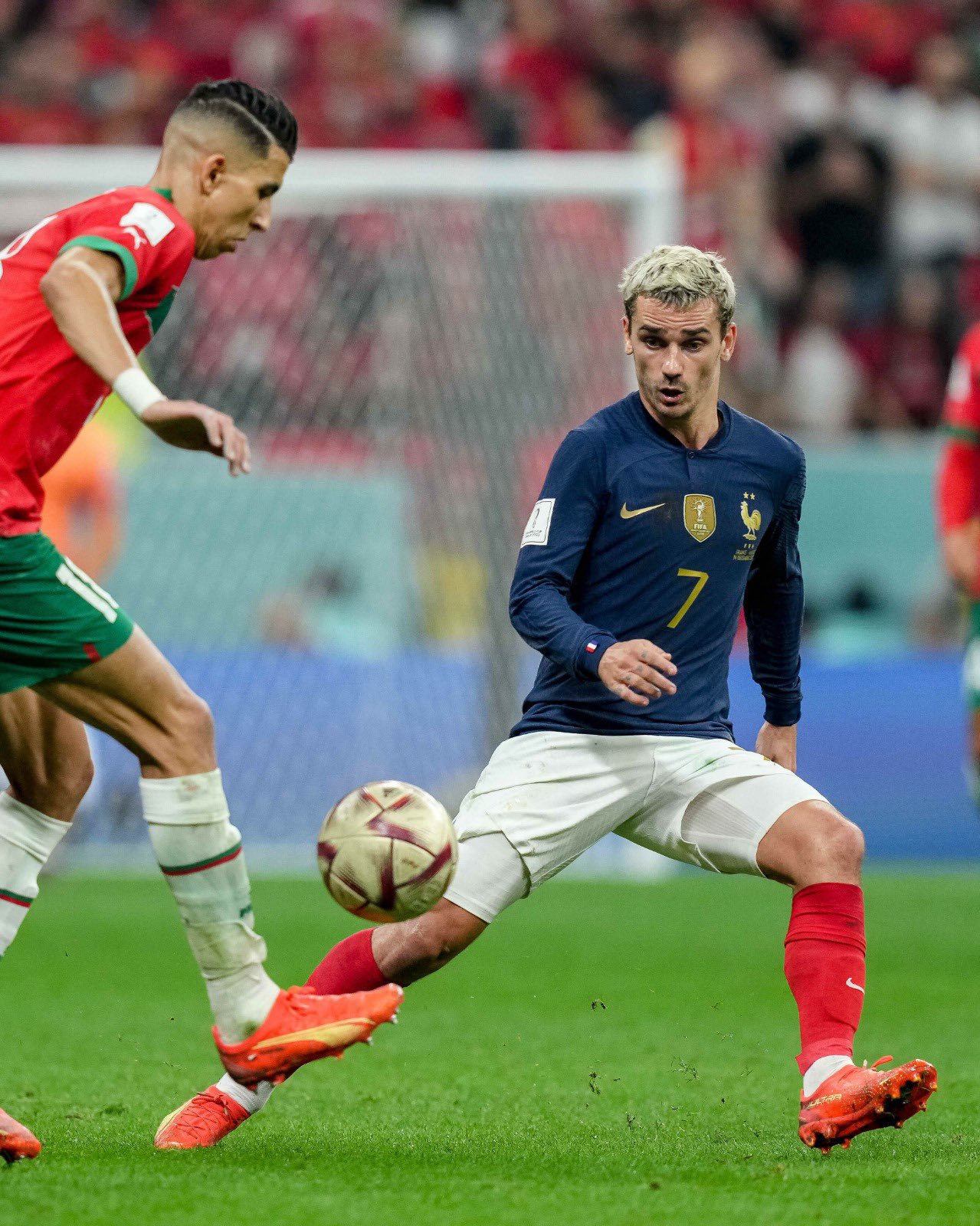 In the game against Morocco, Griezmann made more tackles than Chuameni and as many interceptions as Yussuf Fofana, who replaced Rabiot.

Fofana and Chouameni were some of the best defensive midfielders in Europe at Monaco last season and were praised for their versatility.

Griezmann is without a doubt already a legend in France. He played a key role in getting Deschamps’ team to three of the last four available finals – two at the World Cup and one at the Euro. Keeping the World Cup will further cement his legacy as one of the best players ever to play for France.

So who is Griezmann? He is a roleless player capable of scoring, creating and defending. This is what every coach dreams of when he assembles a team. Right now, Griezmann could be France’s main hope for success on Sunday.