Success is only the League of Nations.

Only three matches were not enough to reach a hundred, 17 goals – to the status of top scorer. Both of them would definitely have been subdued if there hadn’t been a big six-year hole in a career for the national team.

Benzema in the national team – these are three strange and different periods in content.

In 2006, the French team, only because of David Trezeguet’s penalty miss, missed the chance to become the world champion, and in 2016, they took silver at the home Euro. Between these tournaments, the French did not shine at all, and Benzema managed to play for the national team at that very moment.

He knew how to win the Euro – he did it with the U-17 team, along with Nasri and Ben Arfa, defeating the Spaniards with Piqué and Fabregas in the final. But with adults, such success was not.

Benzema played for the French national team for the first time in 2007. Then he went to three international tournaments before his suspension.

• Euro 2008 – France’s failure with one point and one goal in the group. 20-year-old Benzema has two matches. Of the bright for the French – only loud criticism of the media, Karim also flew in. 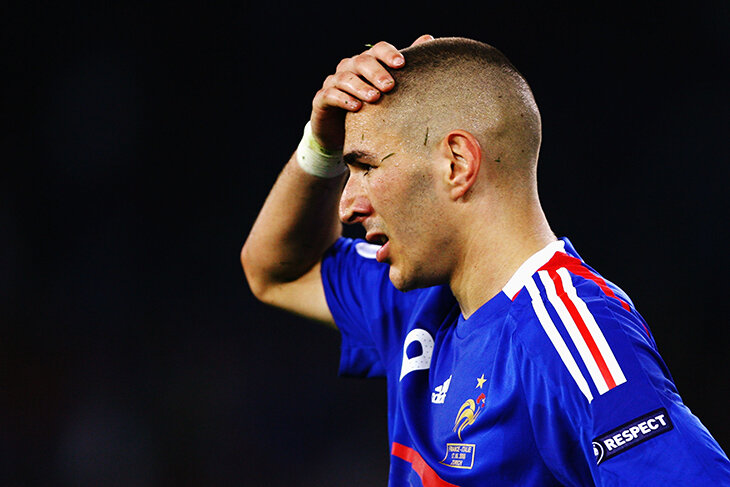 • 2010 World Cup – another humiliation for France with one point and one goal in the group stage. Benzema did not participate – he was not taken to the tournament. A couple of months before South Africa, Karim got into a scandal with an underage prostitute. Raymond Domenech assured that this had nothing to do with the non-call – Benzema just had a difficult debut season at Real Madrid. 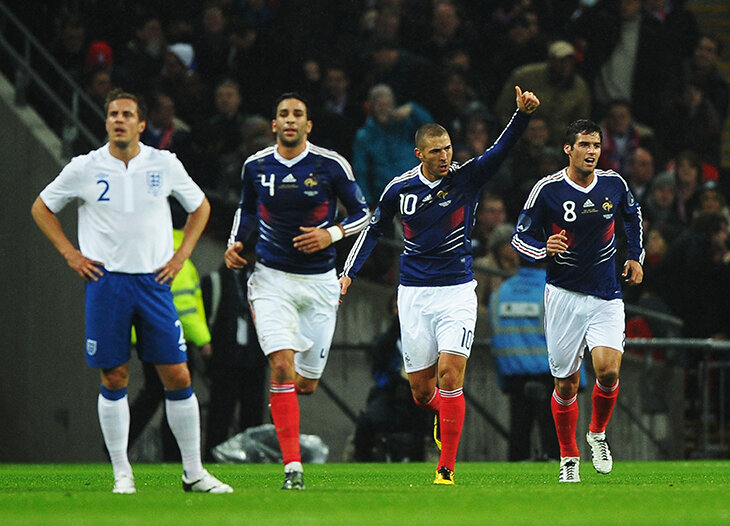 In general, it was so – only nine goals in all tournaments. Only four starts in 15 matches in 2010 before the World Cup – and only three goals. So Cisse, Gignac, Henri and Anelka went to the World Cup. And also Ribery and Govou, although they were involved in the same incident as Benzema.

• Domenech was replaced by Laurent Blanc, who, although he cursed Benzema for being late, put him in qualifying for Euro 2012 – and he periodically thanked him with goals or assists. At Euro Karim gave two assists in the match against Ukraine and was a regular starter, while the not-too-bright French were quietly eliminated in the quarter-finals by Spain. 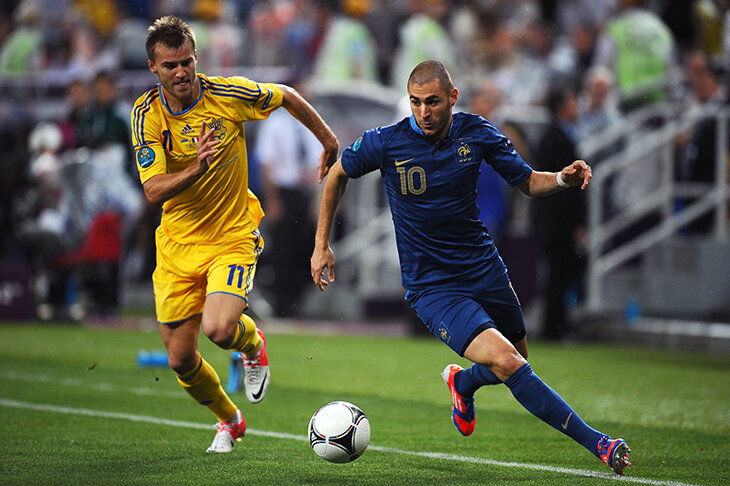 • Since then, the Euro has stretched and the streak without goals in the national team – as much as 16 months. In qualifying for the World Cup there were two goals, one of them – again to Ukraine in the return joint. The World Cup started off great with 3+2 in the first two matches against Honduras and Switzerland. Yes, and ended only in the quarterfinals, which was already a success for France against the backdrop of past failures.

Perhaps only with the 2014 World Cup Benzema could return more or less satisfied with the game for France. 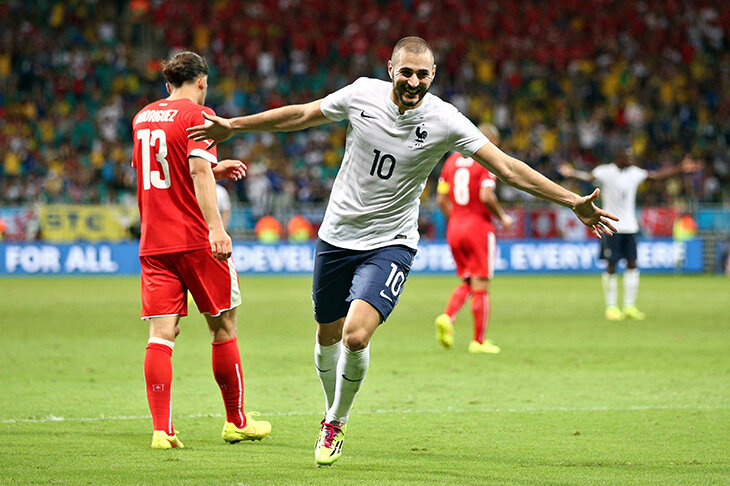 In the fall of 2015, Benzema scored a double against Armenia, and a month later he was arrested after an investigation into blackmailing Mathieu Valbuena with an intimate video. Then the president of the French Football Federation, Noel Le Grae, expelled Benzema from the national team, and the sports minister supported this decision. Didier Deschamps also agreed – for the sake of the atmosphere in the team.

Then began the annual skirmish with caustic phrases. At first, Le Grae said that he was waiting for a change in the situation, then he said that Benzema acted “in a donkey’s stupid way”, then he repeated that his career in the national team was over. And in 2020, he suddenly admired Benzema’s season, which amused the football player who retweeted with laughing emojis and the phrase “I’d rather laugh.”

Okay, Le Grey, but Deschamps was also affected, and from an unexpected side – Benzema himself said that the coach “succumbed to pressure from the racist part of France.” After that, the inscription “racist” appeared on the wall of Deschamps’ house.

Hopes for Benzema’s return faded. “The line has been crossed here. It discredited my name, my family, ”the coach later explained. Although he hinted: “Other players allowed themselves inappropriate statements about me, but this did not prevent them from returning to the national team.”

Deschamps is constantly offended for choosing the squad for the World Cup and Euro. Fair?

The French national team and Karim Benzema have already got used to living separately during this time – the players in it collected medals from major tournaments, and he raked up trophies at Real Madrid. It seemed that this would continue. 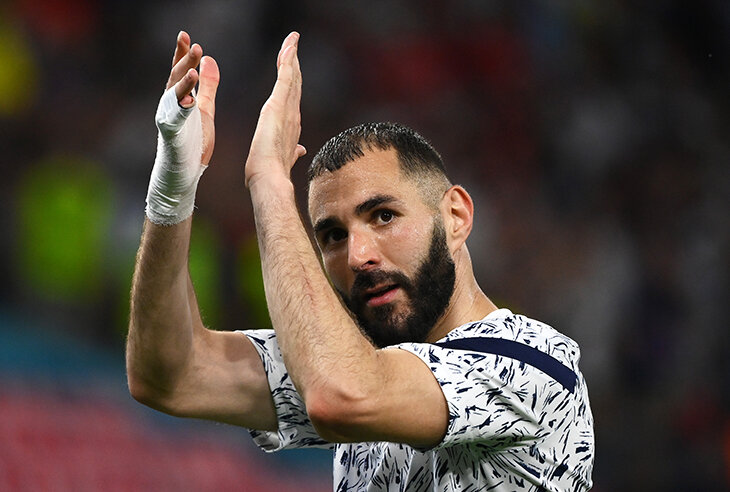 Before Euro 2020, another surprise struck. Although Benzema had a great season, he was suddenly called up to the national team. There were several questions here:

• The side was two-thirds up from his last match, and closer to the Euro Deschamps used a two-striker formation that was unaccustomed to Benzema. Who will have to adapt and is it worth it? Given that even in the reserve excellent forwards languish.

• Once again – the national team has been updated by two-thirds. Will he fit into the team in such a short time? Also given the strange quotes about Giroud.

• How to deal with the pressure from the past history and the fact that Benzema regularly bullied Le Grais, attacked Deschamps? And the Prime Minister and the President of France have publicly supported the coach throughout history.

• Benzema’s refusal to sing the national anthem can also be attributed to this – he said that he did not like the message of war, and in general stated that he was an Algerian at heart. This angered the far-right National Rally party, which immediately fired slogans at the footballer when Deschamps took Benzema to the Euros. Accusations even of commercialism followed.

Benzema has 4 Euro goals but the French nationalists hate him. Their accusations are just manipulation

At the tournament, Benzema silently started in the first two games, and then burst out with doubles against Portugal and Switzerland. And again he left home too early – even after the 1/8 finals, when Kylian Mbappe did not score the post-match penalty against Sommer. 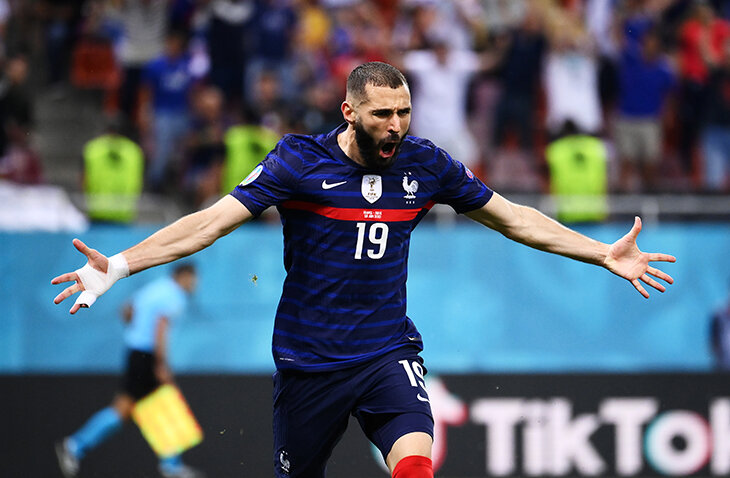 For a whole year since then, everything has been very good: Benzema scored in World Cup qualifiers, helped win the Nations League with goals in the semi-final and final, and finally won the entire Golden Ball, having played the 2021/22 season sparklingly.

Benzema was expected to play at the 2022 World Cup, but he injured himself in training. On the day of the start of the World Cup, it became officially known that the best football player in the world would not play on it. Benzema went on a short vacation and then returned to Real Madrid. All this time he was not excluded from the application for the World Cup, so theoretically he could play at any time.

But it won’t play at all. He announced it himself.

What’s going on with Benzema? They say he was offended by Deschamps, felt unnecessary and did not want to go to the World Cup final

The result of a career in the national team: a lot of matches and goals, but all the medals – by

On account of Benzema 97 games and 37 goals in the French national team. He has been to three Euros and one World Cup. Just on those where the team either could not reach success, or looked dull. 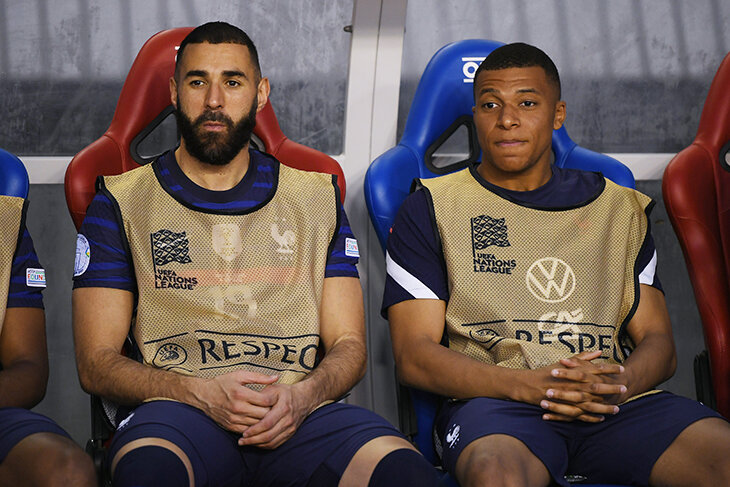 It looks like some kind of mockery that Karim missed all four medal tournaments of the French team in the 21st century – he was still very young in 2006, because of the scandal he was not called up in 2016 and 2018, and four years later he did not play because for injuries.

Although formally the silver medal of the 2022 World Cup belongs to him, after all, Benzema was listed in the application until the end of the tournament. But he hardly needs her at all. At club level, he has won everything. In the national team, he flew past the medals every time.