The playoffs have started at the World Youth Championship. Yes, this is the same MFM that was originally supposed to be held in Novosibirsk and Omsk, but for known reasons it was given to the Canadians. It is curious that the arena in Novosibirsk was only recently put into operation, and so far it has not yet hosted a single test match, but this is a topic for another text. In the meantime, it is interesting to figure out who could go from Russia to the MFM – now it would be guys born in 2003 and younger.

The final composition of the national team would certainly give a lot of reasons for controversy. Here the question is who could lead the team to the tournament – in recent years, the youth team had several coaches – and each with his own characteristics. At the MFM-2022, which was canceled due to covid, Sergey Zubov was in charge of the team, and his further fate would most likely depend on the outcome of the tournament.

Therefore, in our forecast – the composition that would be the most optimal without taking into account any coaching desires. If Bragin were the coach – we would definitely not see a couple of names from the list below, if Larionov were the coach – perhaps a couple of non-obvious players were added who could even play a key role. Be the coach of Zubov – more players of the SKA system or their more significant roles in the team. In general, a lot of introductory ones that we omitted.

In our opinion, the team for the MFM-2023 would have looked like this and the application of 25 players would have been formed like this.

Further down the text we will explain who, what and why.

This is the first MFM in the last three years, to which the team would go without Yaroslav Askarov as the first number. He did not always justify this status, and, nevertheless, it was he who started the last three tournaments. Now the closest to the position of the main goalkeeper is Semyon Vyazovoi from the Salavat system. He is one of the few who has constant game practice with men – he played 12 games a season for Toros, another 19 for Tolpar in the MHL. Toros is by far not a top club by VHL standards, but it has decent numbers there: 8 wins, 93.6% of shots saved, with a reliability coefficient of 1.91.

The backup position would be taken by Sergey Murashov – he has already made his debut in the KHL for Lokomotiv and showed a mature game against Sochi. The only problem is that he spends most of his time in the MHL, and in the leading team that plays from a position of strength and dominates the league. The third would be logical to take Sergei Ivanov from the SKA system, who would have already gone to the MFM-2024 as the main contender for the role of the main one.

Closing the topic with goalkeepers, let’s say that the goalkeeper of the youth team of Magnitogorsk Ilya Nabokov and the Moscow soldier Dmitry Gamzin could compete for a trip to the tournament. Only Nabokov did not play fully in the KHL, although he has excellent statistics in the MHL, and Gamzin is good at the youth league level, not quite stable in the VHL and beat Kunlun in his only match in the KHL.

Here, the coaches would have had enough headaches. In the KHL, VHL and overseas juniors, there is a minimum of right-handed defenders, which limits the variability in the game too much – including in the majority. Yes, no one forbids the use of a right-handed forward on the blue line, which is in abundance in this squad, but such schemes also carry certain risks.

So the only right-handed defender in the team would be Vsevolod Komarov from the main junior league of Quebec. Moreover, he was born in 2004, with good dimensions (188 cm, 83 kg) and would greatly help the national team both this year and the next MFM. Now he has 21 (3 + 18) points in 33 games and a fantastic +33 – this is the second indicator in the league.

The rest of the positions are divided among the left-handers – and here, by the way, is also the question: is a right-handed player really needed in the first brigade of the majority, if there is Pavel Mintyukov, who at the level of the youth team could safely play for 23-25 ​​minutes. The first-rounder of the last draft, the third (!) scorer of the Ontario League – 51 (14 + 37) points in 34 matches. The place in the top 4 of Nikita Evseev, who performs great in Ak Bars, is not discussed – in theory, he can also play at the next MFM.

We see Komarov in the second pair, along with his peer Kirill Kudryavtsev, who has 28 (6 + 22) points in 33 games in the Ontario League. Otherwise, there are several defenders of equal level who would compete with each other for the remaining places. 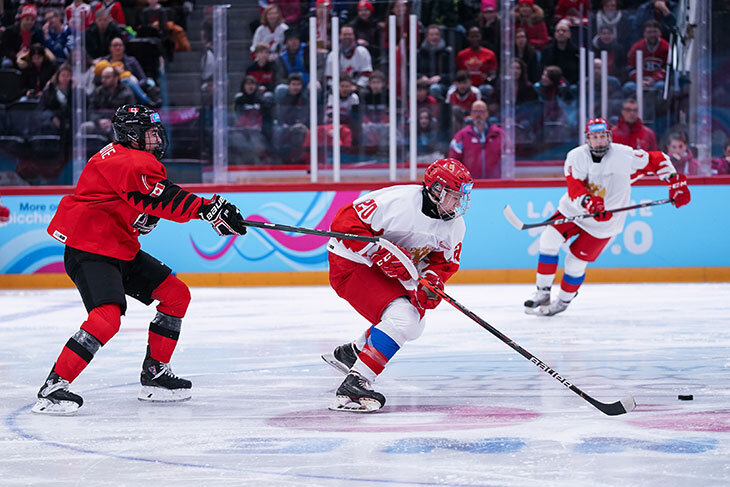 Nikita Novikov stands out in size, who plays an average of 10 minutes in Dynamo and could well close the position in the third pair of defense, where we also identified the budding Dallas prospect Artem Grushnikov. He still does not shine with performance and, perhaps, we overestimate him.

Artem Duda, Gleb Ivanov and Yaroslav Busygin would certainly claim the place of the seventh defender, but Mikhail Gulyaev (he is generally 2005) and Vladimir Grudinin look stronger. However, if Grushnikov is abandoned, then the same Duda could fully replace him.

Coaches would also have to make a difficult choice – but for completely different reasons: there are a lot of worthy forwards for the national team. Moreover, there is a large selection from the KHL, where attackers not only get playing time in clubs, but periodically try out for the top 6. The most interesting thing is that according to the set in the attack line, a very playing team would turn out, which is really interesting to see in action. Alas, she will remain only in our dreams.

Of the North American leagues, there are two clear candidates for the national team – Matvey Petrov and Maxim Barbashev. But the brother of the St. Louis forward, even in the junior league, is gaining a little less points per game, and he is hardly stronger than one of those who play in the KHL. Petrov looks more interesting against this background – he has 46 (12 + 34) points in 34 games, he is the same player as most of the squad, besides, he is right-handed.

The rest of the players are from Russian leagues. The central axis is not the strongest place in the national team, unlike the extreme ones, where there is an abundance of creative forwards. But the first three centers consistently play for men. The same Katelevsky only in the last month and a half received a more or less stable place in Ak Bars and scored only 0 + 2, but he wins 55.8% in the KHL and 57.7% in the VHL. Fedor Svechkov, who was drafted highly by the Nashvilles (1st round, 19th overall pick in 2021), is a little sad, but he is trying to make up for his KHL zeros with points in the tower (1+6 in 14 games) ). 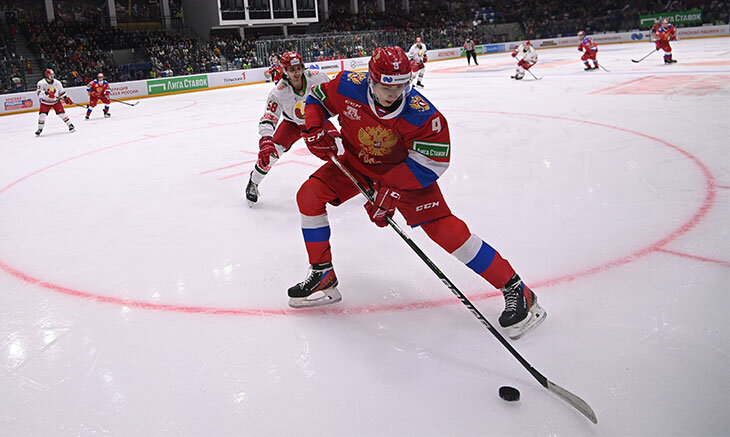 For the extreme forwards, the choice is really excellent, and the places in the threes are distributed very conditionally and may well move even now, even during the tournament. The units on this list are good on both sides of the ice, but this is the thing that plays a far from defining role in youth hockey (or we want to believe it). Any of these guys can play on the powerplay, and in terms of attack, this squad could make some noise.

At the same time, our version of the roster did not include Nikita Chibrikov, Alexander Perevalov, Gleb Trikozov – although the last two would definitely be candidates for a trip to the MFM-2024, age allows – and a few more interesting guys, because it’s corny that there are those who are stronger right now .

Looking at the current MFM, there is a feeling that the Russian team is very lacking there. And I really want us to meet 2024 with the expectation of top matches performed by our youth team. By name, quite an interesting team can also gather there.