Advertising from the early 2000s. 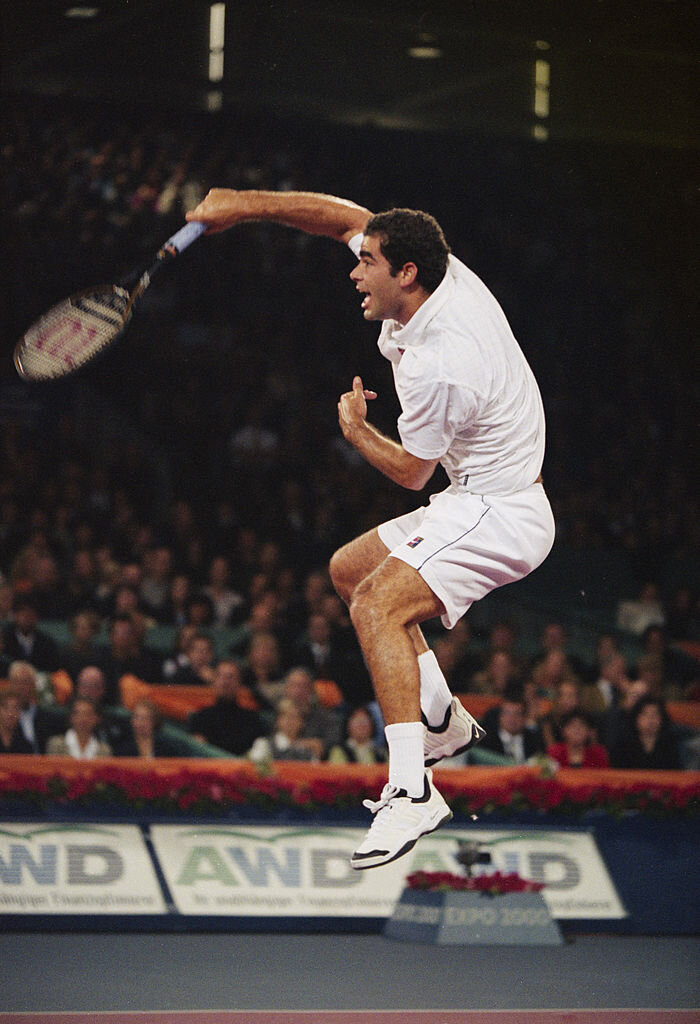 In 1999, there was chaos at the top of the rankings – five players managed to visit the first racket of the world in one season: Pete Sampras, Carlos Moya, Evgeny Kafelnikov, Andre Agassi and Pat Rafter. At the same time, the top was so stormy that Moya and Rafter at the end of the year did not even get to the final ATP tournament in Hannover.

Three of the four Grand Slams were taken by experienced leaders Agassi and Sampras, but the results of the rest of the tournaments were not so predictable.

“It’s impossible to imagine anyone reaching the finals and semi-finals every week,” said ATP spokesman Graham Agars. “The men’s tour has become so diverse that a few players can win any tournament.” His words were confirmed by statistics: there were eight different champions at nine Masters:

Fans needed to be introduced to young players, so the next year the ATP turned to the PR agency Burson Marsteller. After a gigantic number of meetings, according to Agars, PR people began to work on a campaign that would introduce the new faces of the tour. The launch was prepared for the summer American series in order to get maximum coverage in the press. 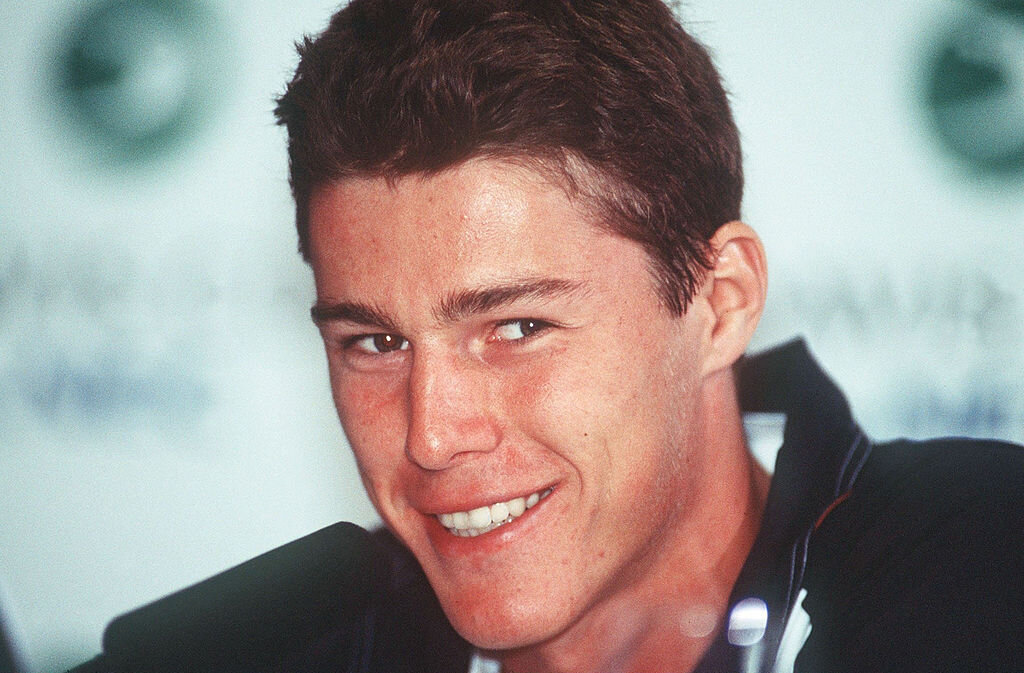 “Research has shown that the public wants to know more about young players, so our goal was to show the determined attitude of newcomers and try to make them look like gladiators in a duel,” explained Aylana Kamelmacher of Burson Marsteller.

Photo shoots took place during Wimbledon and the Gstaad tournament, and the New Balls Please campaign launched at the end of July. Black-and-white footage was published in Newsweek, USA Today and shown on TV during the Masters in Toronto.

ATP went on a provocation, striving for the commercial success of the women’s tour

The slogan New Balls Please referred to the harmless request of the judges on the tower to bring new balls – and to the fact that the English balls are not only sports equipment, but also male testicles in slang . 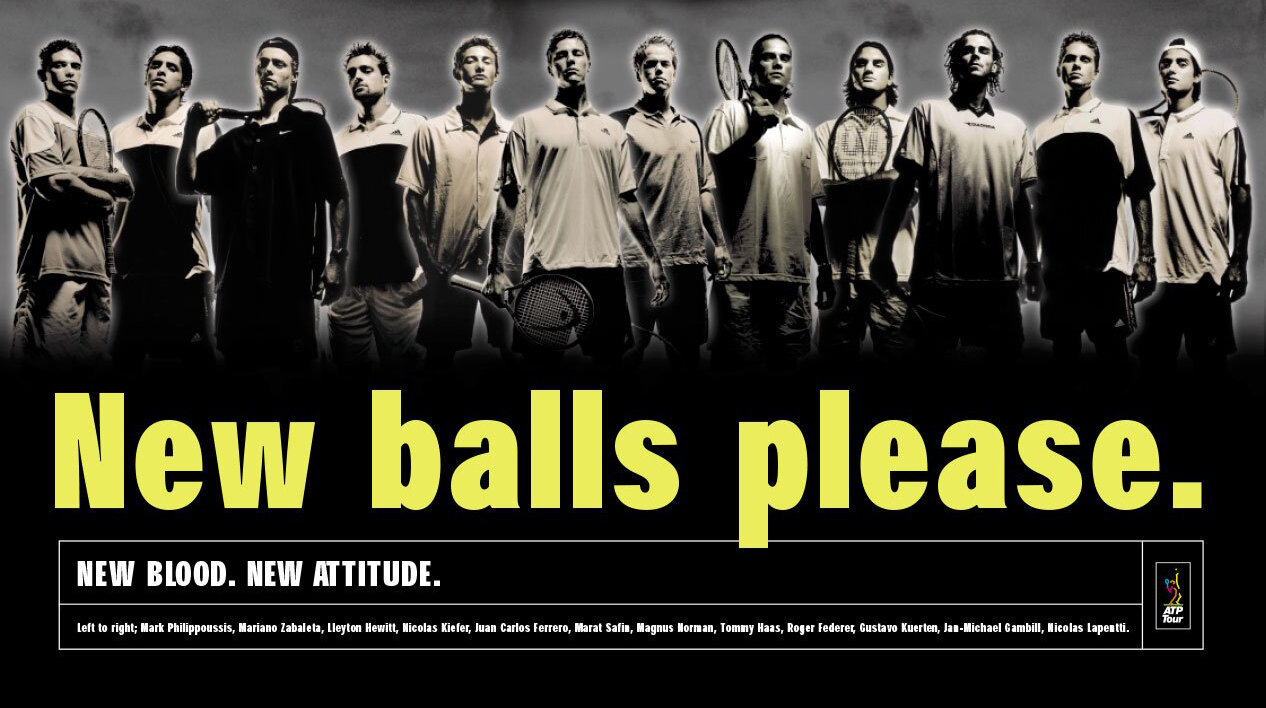 The central theme of the promo was work with fans. Before and after the matches, fans could interact with the players and get autographed posters. “We call it ‘rock star sessions’,” said Matthew Rupp of the ATP London office. – We are clearly aware that the time has come to promote tennis as a product, and the product is the players. We want people to see the faces of the new stars.”

The ads flirted with the stereotype that tennis was an elegant, understated sport. Insolence fired, but immediately provoked criticism. Some accused the ATP of serving too aggressively, others thought it belittled veteran players. Sports Illustrated called the idea straightforward, berating the tour for its “hidden self-doubt and low self-esteem” in pursuit of the commercial success of the early 2000s WTA .

ATP didn’t stop at New Balls Please. The following slogans continued to exploit the theme of closeness to fans and generational change: How do you like me now? (“Do you like me now?”), The new establishment (“The New Elite”) and Who’s next? (“Who is next?”). New heroes were attracted to participate, for example, Andy Roddick, Guillermo Coria, Max Mirny, Arnaud Clement, Sebastien Grosjean, Justin Gimelstob. Even Moya showed up, and on the most provocative poster: he, along with Gambill, posed bare-chested for the Tennis anyone? poster. (“Does anyone want tennis?”). 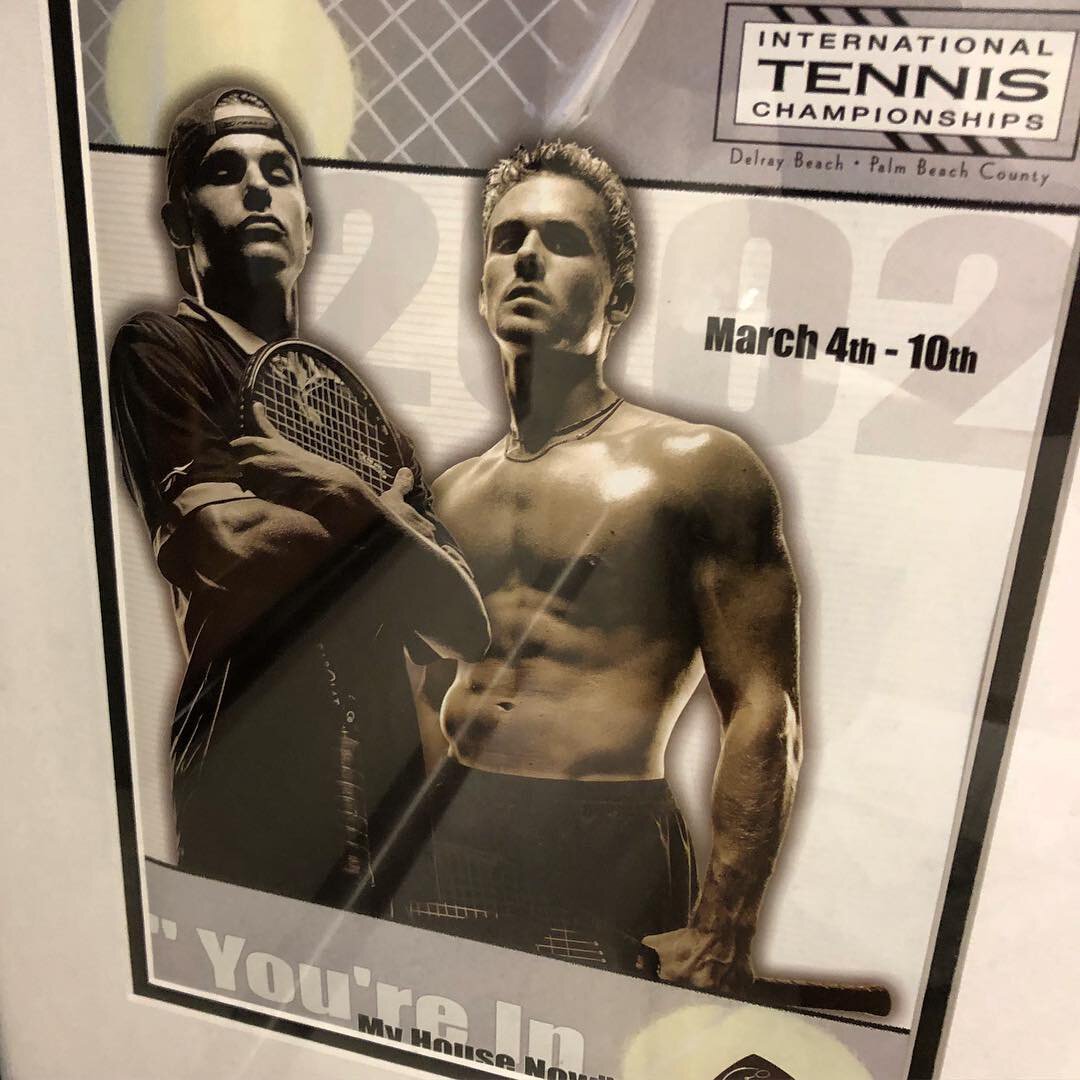 “If people talk about us, it is because the campaign does not leave people indifferent and works. You can’t create John McEnroe, Andre Agassi, Tiger Woods or Michael Jordan. Big stars appear when they appear. Our goal is to create an image for as many good tennis players as possible, and we hope that many of them will become superstars. We want to show a new look, not promote Sampras and Agassi, who are in the commercial twilight of their careers,” Agars said. The ATP did not disclose the budget, but Agars admitted that the campaign was one of the largest in the history of the tour at the time.

“I think it’s always great to introduce the players to the public or the public to the players. Especially if they are young and are going to stay on tour. The sooner you recognize them, the better for tennis,” Agassi tried to find a compromise.

“The men’s tour mimics what women have done to get attention,” USTA’s Joe Favorito said, alluding to the popularity of Anna Kournikova, Martina Hingis and the Williams sisters. “People in the industry liked the new campaign, but it also drew criticism. In any case, they started talking about it, and this is good for tennis.”

Kournikova even had her own ball-themed campaign: an ad for Berlei sports bras “Only the ball should jump.”

Shortly after the promo was released, Kuerten crashed out in the first round of the US Open, losing to qualifier Wayne Arthurs. The despondent Brazilian admitted at the post-match press conference that he didn’t want to participate at all: “I said, ‘I don’t want to be hyped. I’m already too hyped. I want to be unknown. I don’t want to be recognized everywhere. I try to be as little visible as possible. That’s enough already.” Gimelstob lost to Sampras in the second round and quipped that the ad should be titled “Old Balls Please”.

Ferrero, who reached the second week, on the contrary, repeated that promotion is very important for the players. And Safin spoke about the campaign after asking if he was under pressure to talk about a new generation of players.

“It’s nice that ATP is promoting us,” Safin explained. – Now you need to show who you are, what you are capable of and what your goals are. Because they are just names, nothing special. You’re not going to become a millionaire just because your name is on New Balls Please, so you have to show that you’re the kind of guy who will be #1 in the world in two or three years.” 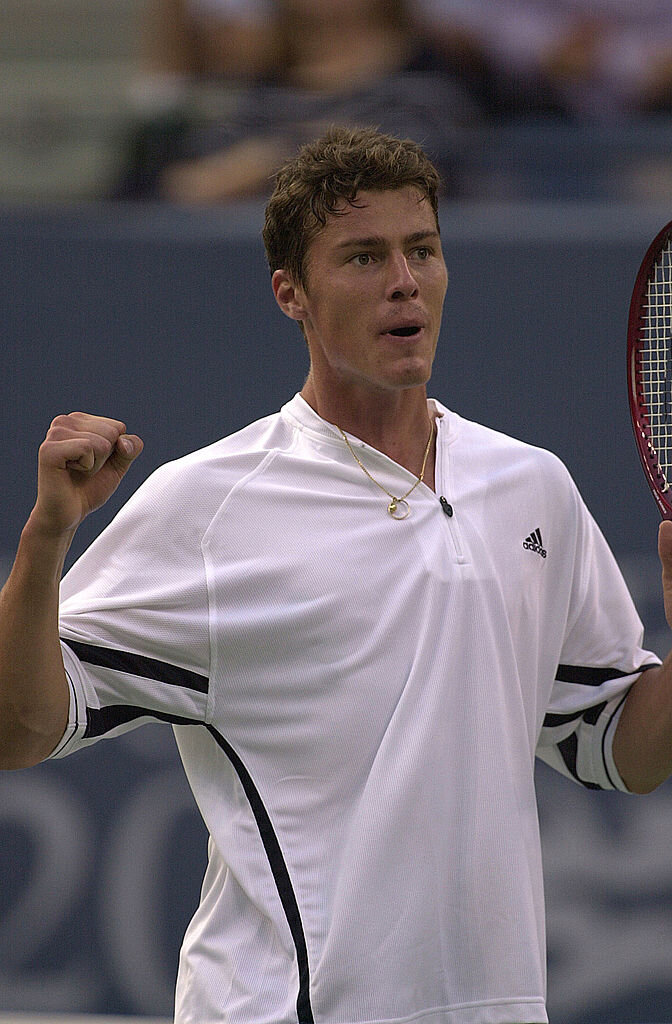 Hewitt also thanked the ATP for the bright message and motivation. “You can’t get lost because you are participating in this campaign,” the Australian reasoned. – I think it’s a good idea from the ATP. There are tops, Rafters, Agassi, Sampras, and there are new guys who are 23 years old and younger, they rise and breathe in their backs.

It was Hewitt and Safin who saved the campaign from a new batch of hate: the Australian reached the semi-finals of the US Open, and the Russian took the title by beating Sampras in the final .

“The launch of New Balls Please came in handy as Marat Safin beat Pete Sampras to become the US Open men’s singles champion. Safin’s win means the younger generation of men’s tennis is poised to kick the bucket,” wrote the New York Post.

“Do you like me now?” reads the ad, which debuted last week. Even the irreverence seems appropriate – the 20-year-old Russian clearly did not frighten the great 29-year-old Pete Sampras, crushing him in three sets in 98 minutes, ”Newsweek added.

Sampras himself, amidst the campaign, was asked what was wrong with “old balls”. He replied that they were fine. The American acknowledged that the promotion of young players is a good idea, but noted that “probably one could have found a better slogan.” 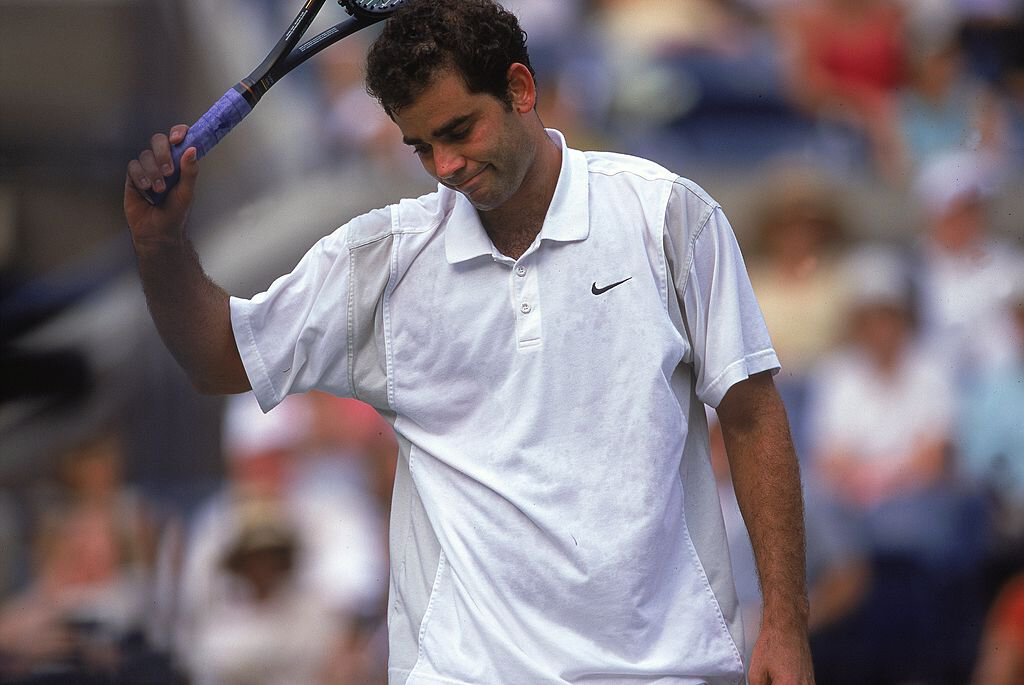 Despite all the resonance, men’s tennis was clearly losing in popularity to female superstars. Safin was asked at the end of 2000 if he agreed that men’s tennis was in crisis. He answered simply: “Crisis is too strong a word. There is only a small problem associated with the change of generations. The public doesn’t know the new guys well, unlike the old fighters Sampras and Agassi.”

But it wasn’t just the public. The new generation needed time to settle in. The next two years, Hewitt took the rap for everyone: he took two Grand Slams, two finals and was No. 1 for most of 2001 and 2002. Federer, considered the most promising of a generation, at that time did not go beyond the quarterfinals at the TSH. The poor results of youth prompted the Australian The Age to pun The New Balls had no balls. 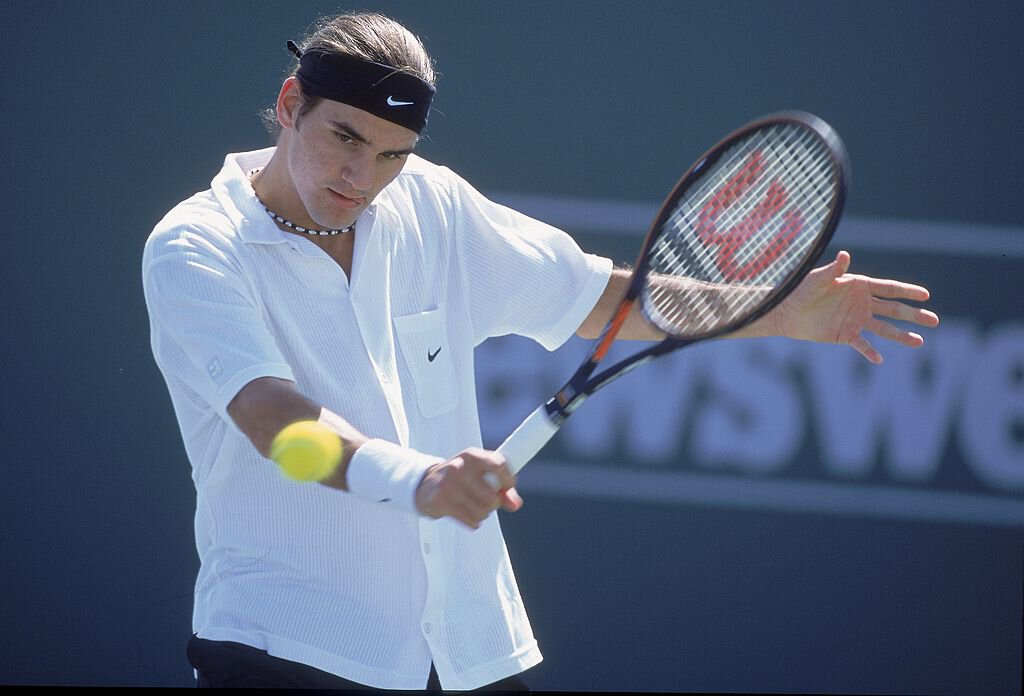 Probably because the generation change was slow and not very successful, ATP decided to expand the campaign. This is how the Battle of the Ages poster appeared with Roddick, Safin and Gambill against Agassi, Sampras and Rafter. The phrase “These balls are still bouncing” was added to the old visual and slogan. “The great thing about the guys in these ads is that they make me want to get better,” Agassi said. Another solution is the “Dream Boys” poster with him and Sampras. 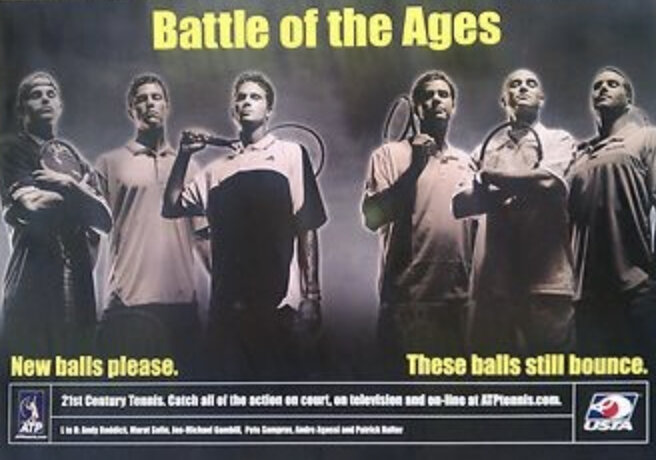 The ATP itself, in a compilation commemorating the organization’s 50th anniversary, called New Balls Please “a beautifully crafted campaign that became an instant classic.” In 2017, the association launched the #NextGenATP campaign, which recalled promos from the early 2000s.

But even five years later, they do not always cope with the legends.