Potter has no such bench. 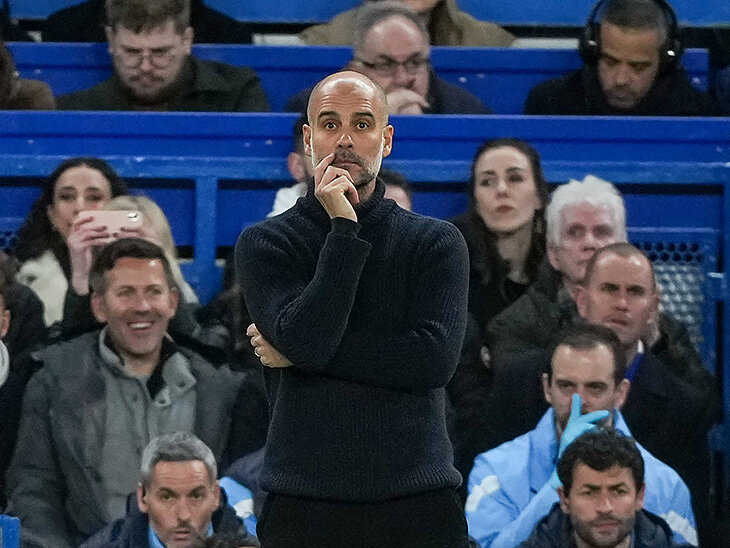 Manchester City beat Chelsea 1-0 away and returned to within 5 points of Arsenal in the title race. The match turned out to be quite closed, but it was interesting in terms of tactical experiments. The initiative came from Pep Guardiola, who at first was too clever with the starting hybrid scheme, but then he competently disposed of the bench.

Guardiola brought back Kyle Walker, Joao Cancela and Phil Foden. Asked about the trio, the Catalan explained the logic: “The fans want these players to start. I think you’ll like this answer.” The motive is clear, but what was interesting was the way Pep brought the fans’ favorites back into the squad.

Instead of the usual 4-3-3 (or 4-2-3-1) with Canselu in his favorite false left full-back role, Guardiola proposed a hybrid formation in which Canselu was positioned on the right and played wide (that is, he was not false). We will definitely look into the details further.

Graham Potter is more constrained in the choice of composition. Regarding the match against Nottingham Forest, Jorginho and Mason Mount lost their places at the start (injury). Only in the case of the defensive midfielder, the decision was not forced – Mateo Kovacic and Denis Zakaria came out in the center.

Another interesting move was in the center of defense. The same pair came out – Thiago Silva and Kalidou Koulibaly, but they switched sides. Now Koulibaly played left central defender, and Thiago acted to the right. This is not a new position for Koulibaly (he played there all the time at Napoli), but a significant difference from the last match.

Chelsea’s quick substitutions (due to injuries to Raheem Sterling and Christian Pulisic) also affected the starting lineup. The hosts did not change the scheme, but the already modest bench became impoverished, which will affect the second half: 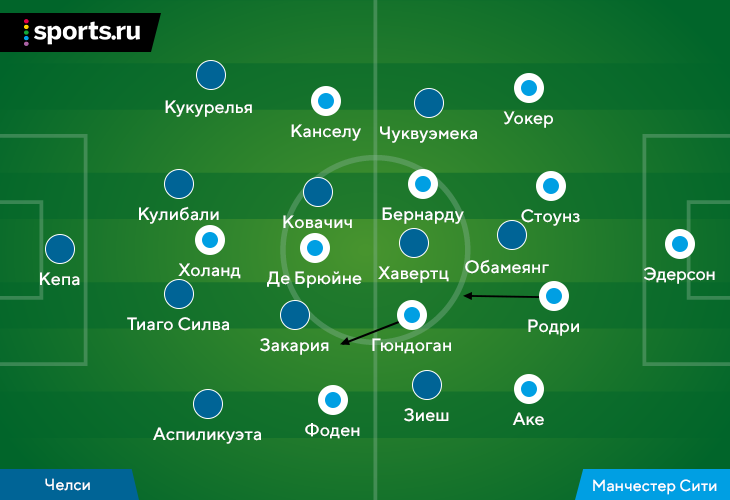 The real location of City was very different from the one that was drawn before the match. Canselu came out not on the left, but on the right for completely different tasks. Along the chain, this affected other mechanisms in the City structure.

In possession, Guardiola’s team used a structure with three defenders (Walker, Stones, Ake), two defensive midfielders (Bernardo and Rodri), two insiders (De Bruyne, Gundogan) – a square in the center of the field was obtained. Foden (left) and Cansela (right) played on the flanks, Haaland played the role of forward: 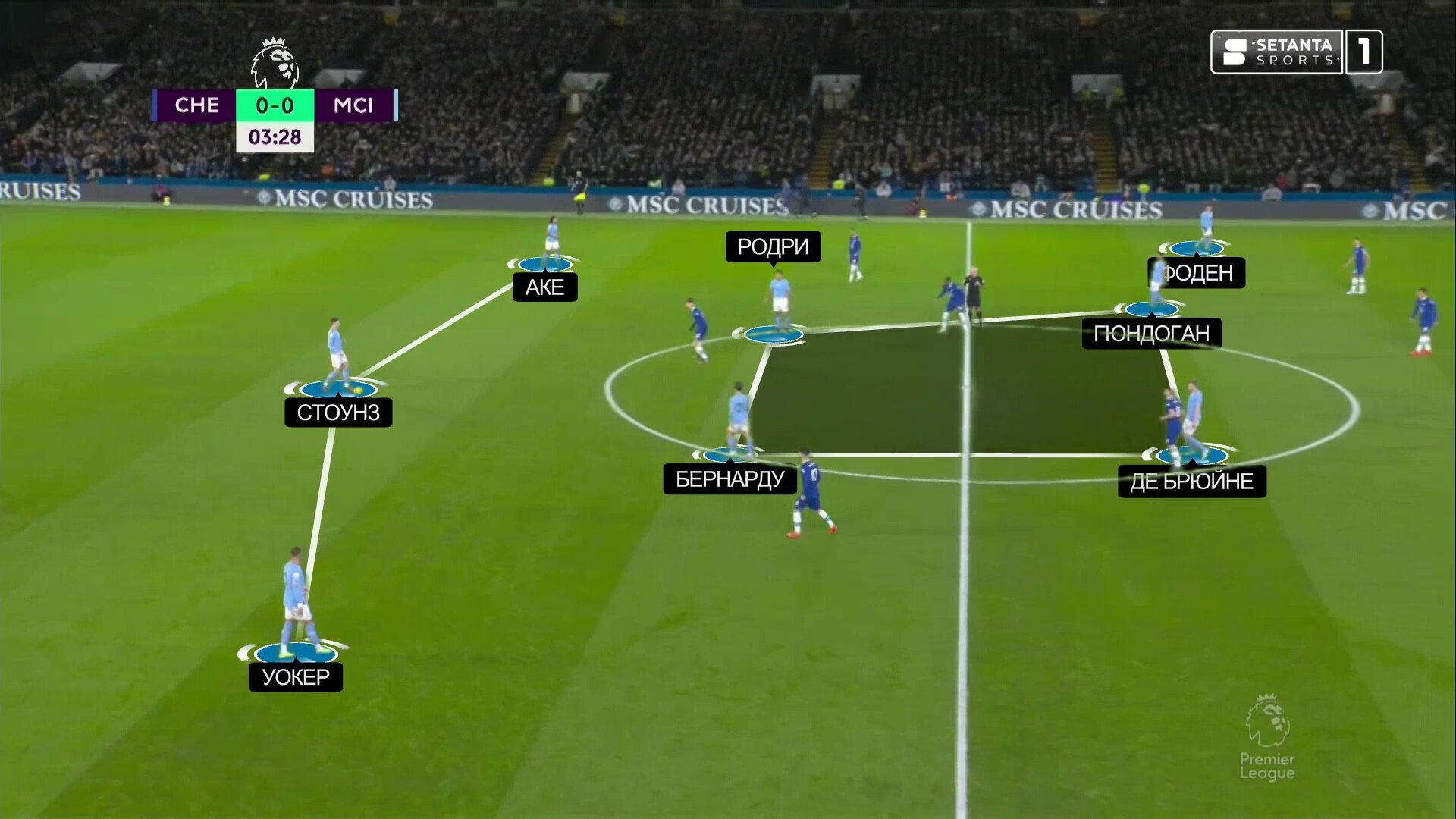 Without the ball, City used 4-2-3-1 (when trying to press) and 4-4-2 in the waiting phase. The common element was a base of four defenders, one of which turned out to be Rodri. In the support, therefore, remained Bernard and Gundogan.

When pressed, Haaland was above everyone else, and the midfield five moved around the ball in 4-2-3-1: 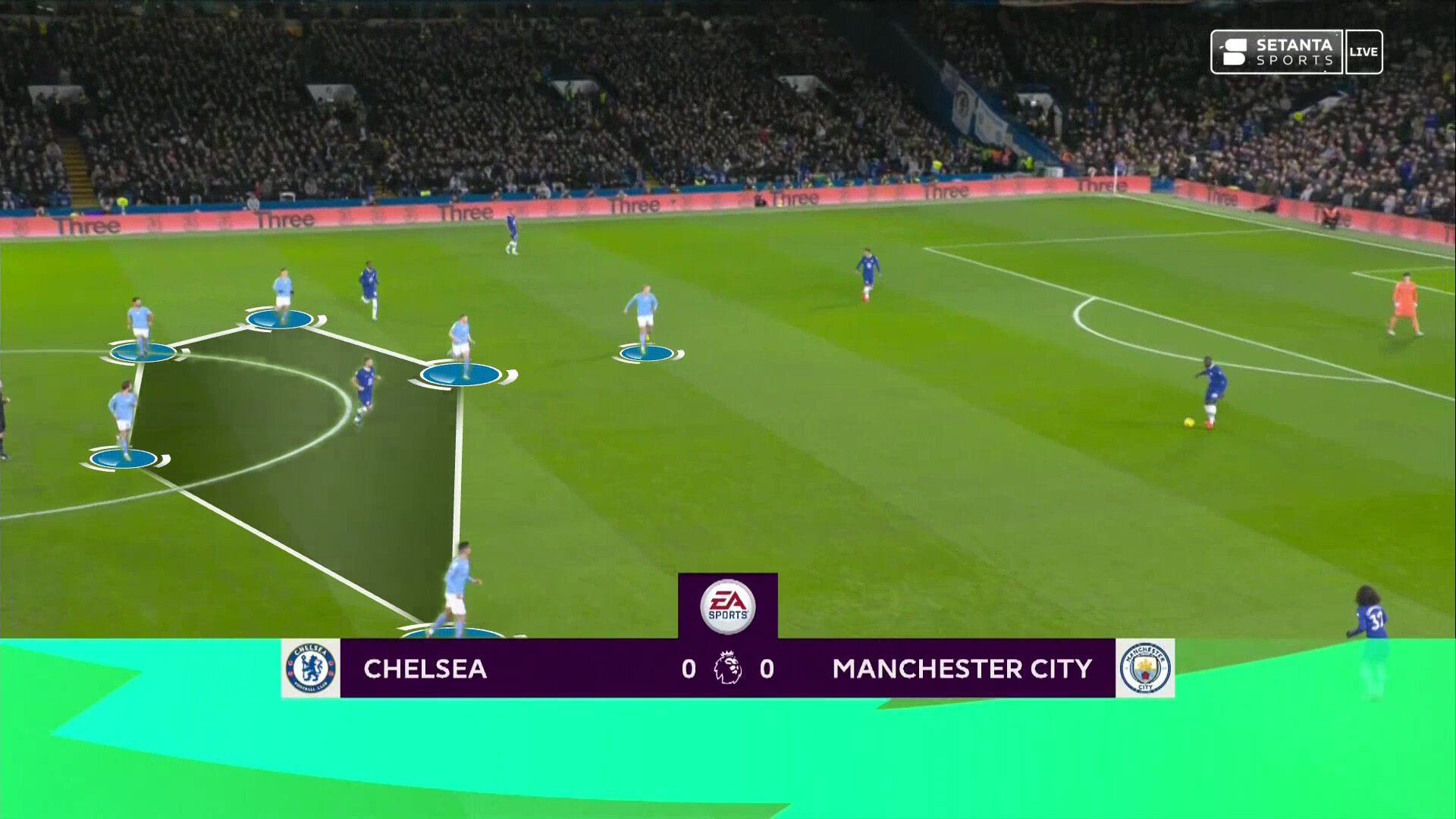 More often, City had a 4-4-2 formation. Rodri played a central defender, and Cancela played a right midfielder (perhaps these are the most unexpected positions): 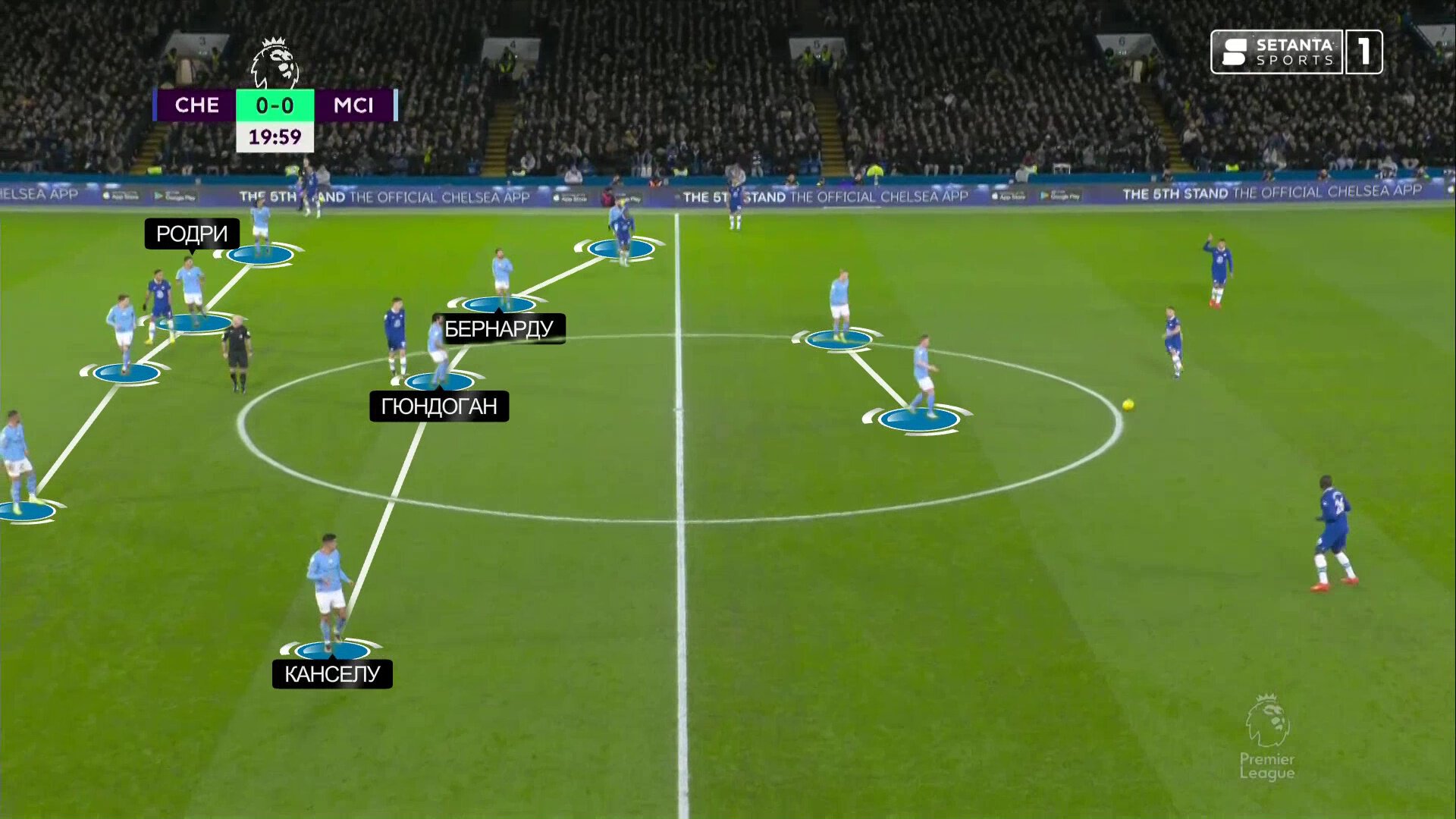 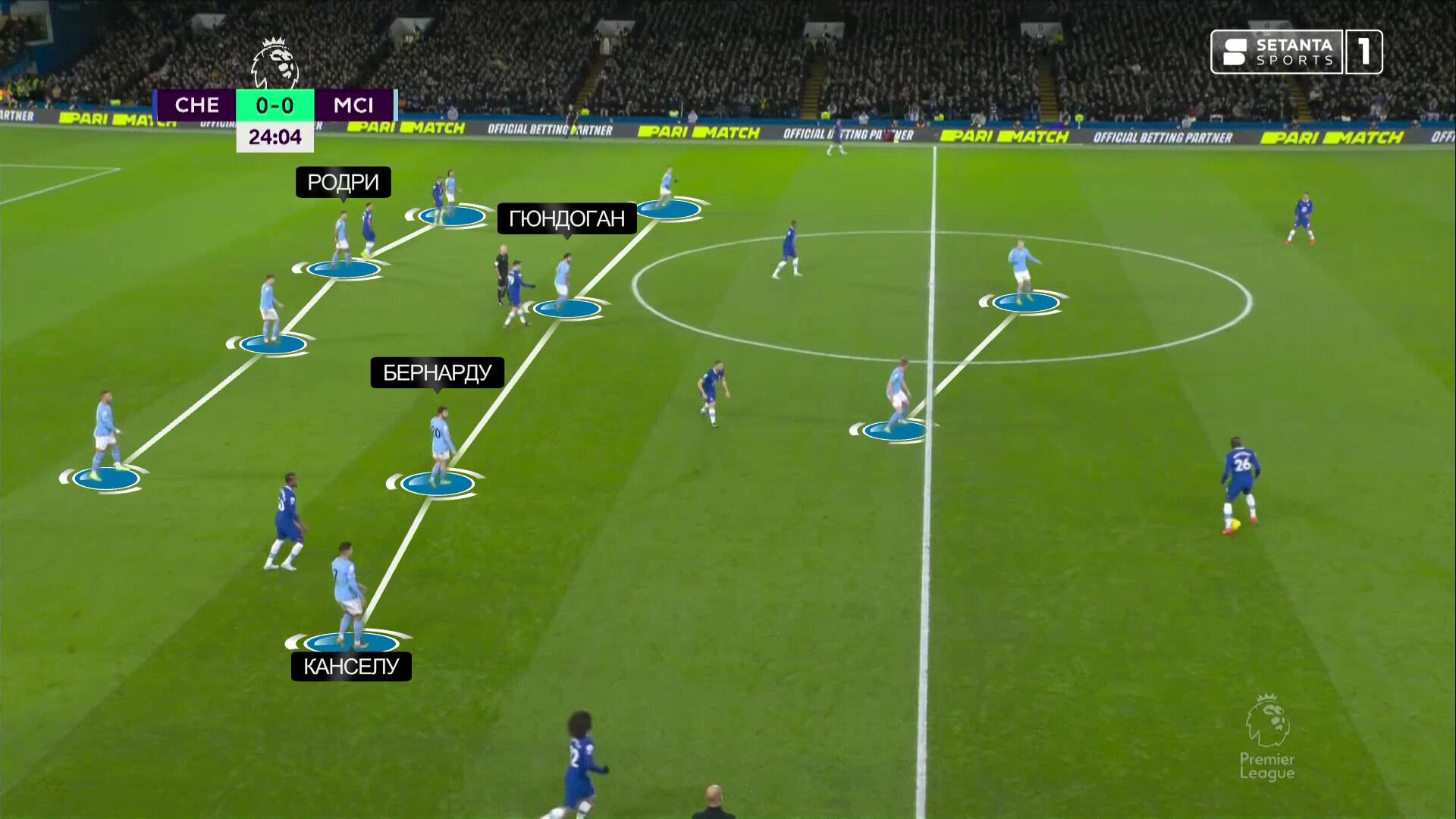 Guardiola’s extravagant plan didn’t work. It seemed that the team was uncomfortable moving the ball in such a structure, but no less important were Potter’s moves against the opponent’s leaders. Changing positions of Thiago and Coulibaly is a maneuver for Holland. The likely logic is that the faster Koulibaly should have helped against Erling’s rushes in the problem area near Mark Cucurella. On the right, due to the correctness of the positions of Cesar Azpilicueta and Thiago Silva, there is simply less gap.

City’s only clear moment in the first half was born from just such an opening by the Norwegian, but on the whole he was adequately restrained – Erling made the first action with the ball in the 21st minute. Such episodes were definitely not a constant source of danger, and the opening and threat after it rather confirms that Potter was not in vain afraid for the zone between Cucurella and the central defender. In general, Koulibaly helped him well.

One of the reasons why Haaland so rarely got the ball was a catch against another City star. Kovacic acted on the KDB with a personal orientation: 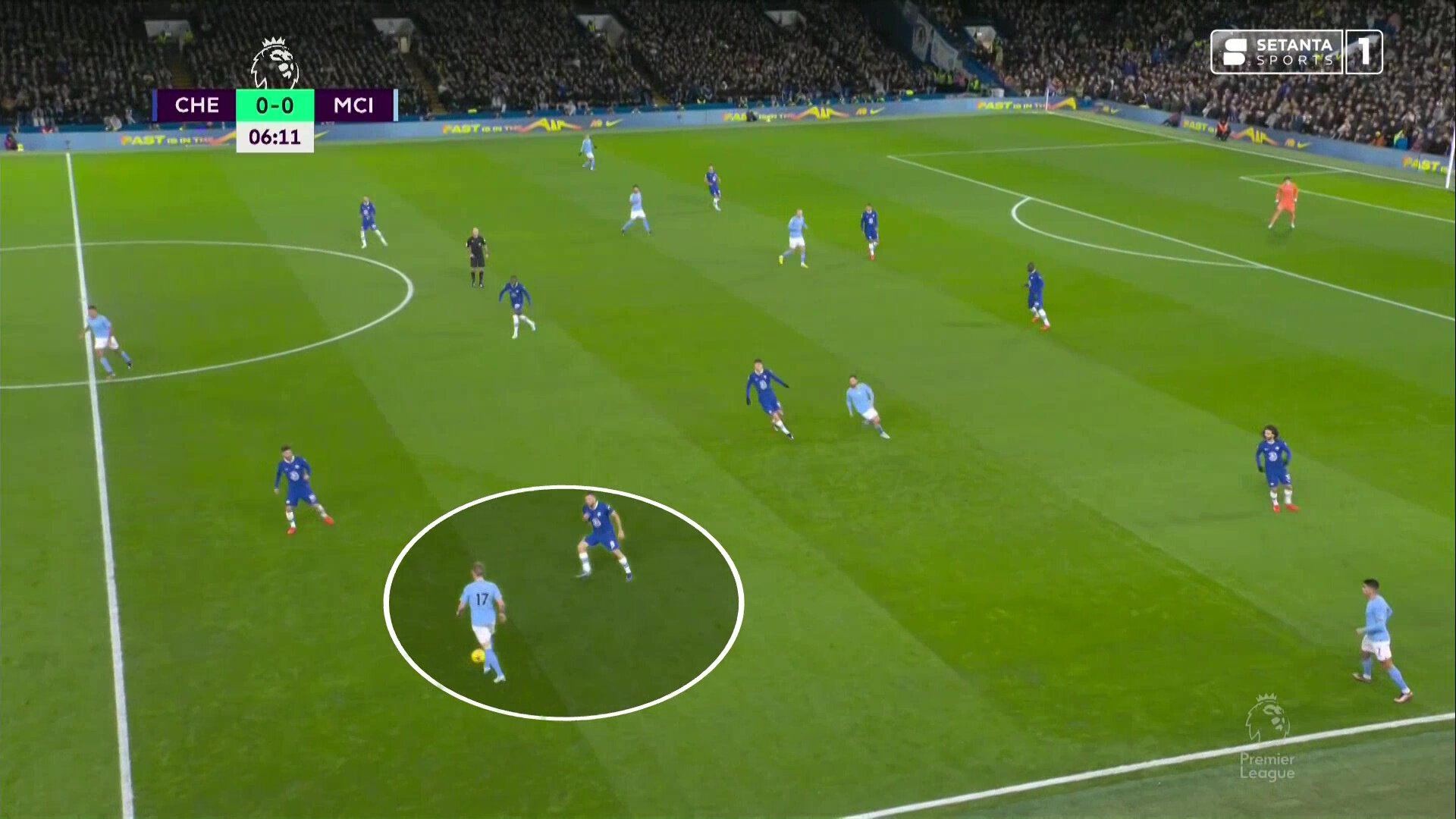 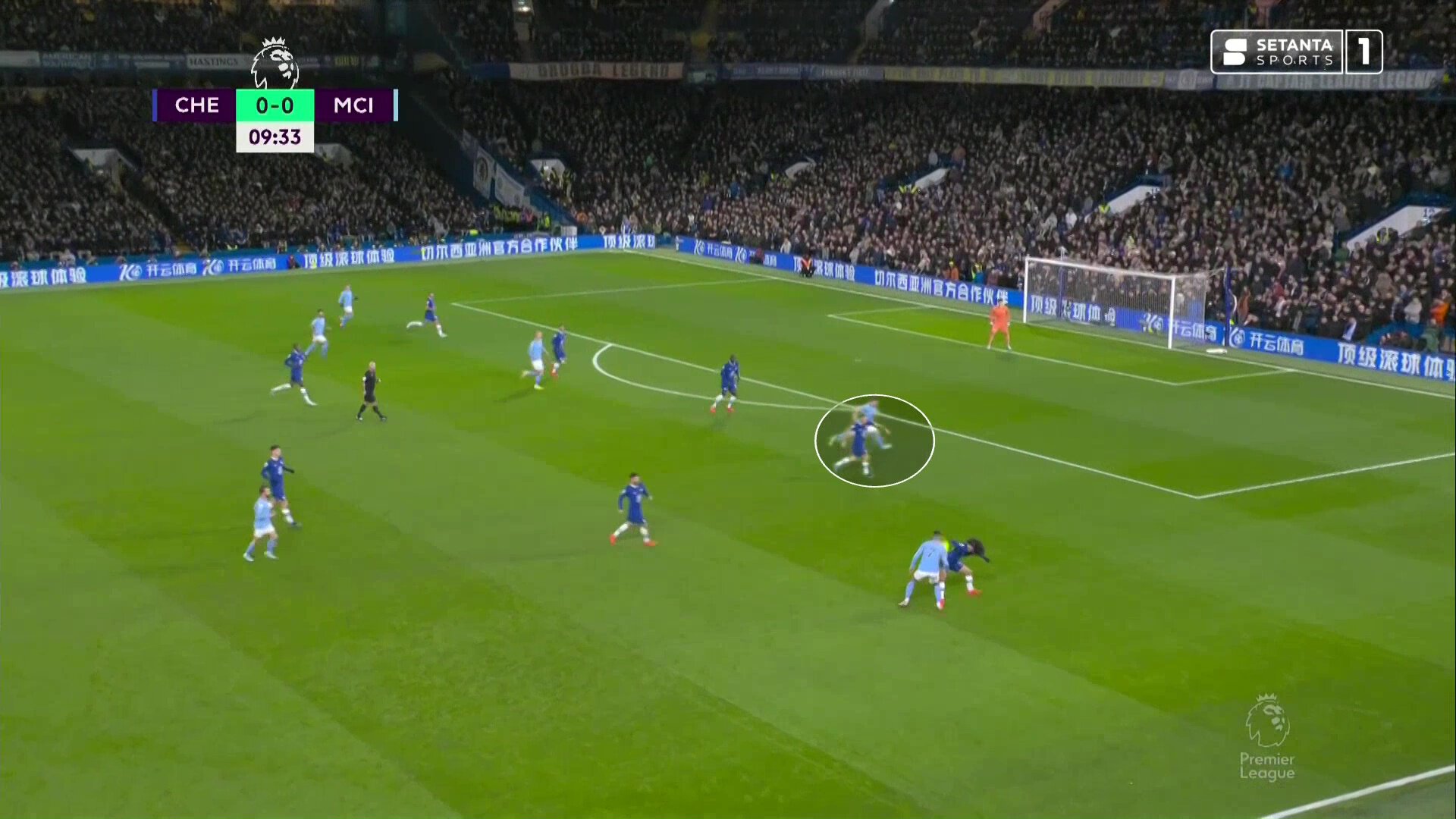 In the first half, City had sterile control in their own attacks and a waiting position when Chelsea had the ball. There was definitely no significant difference.

Chelsea tried to open the support zone without Rodri, and City put pressure on Cucurella’s flank

In the starting drawing, the teams had almost no constant sources of threat, but there were potential areas for creation – points that were occasionally used and which could be checked more often (but for various reasons it did not work out).

For Chelsea, the City support zone looked like the most interesting direction. There regularly emerged a space that Kai Havertz made good use of. In defense, Rodri acted as a central defender, while Bernardo and Gundogan are hardworking but do not read the game like Rodri. City lacked a defensive midfielder with this skill – space regularly appeared.

Rodri in the back four: 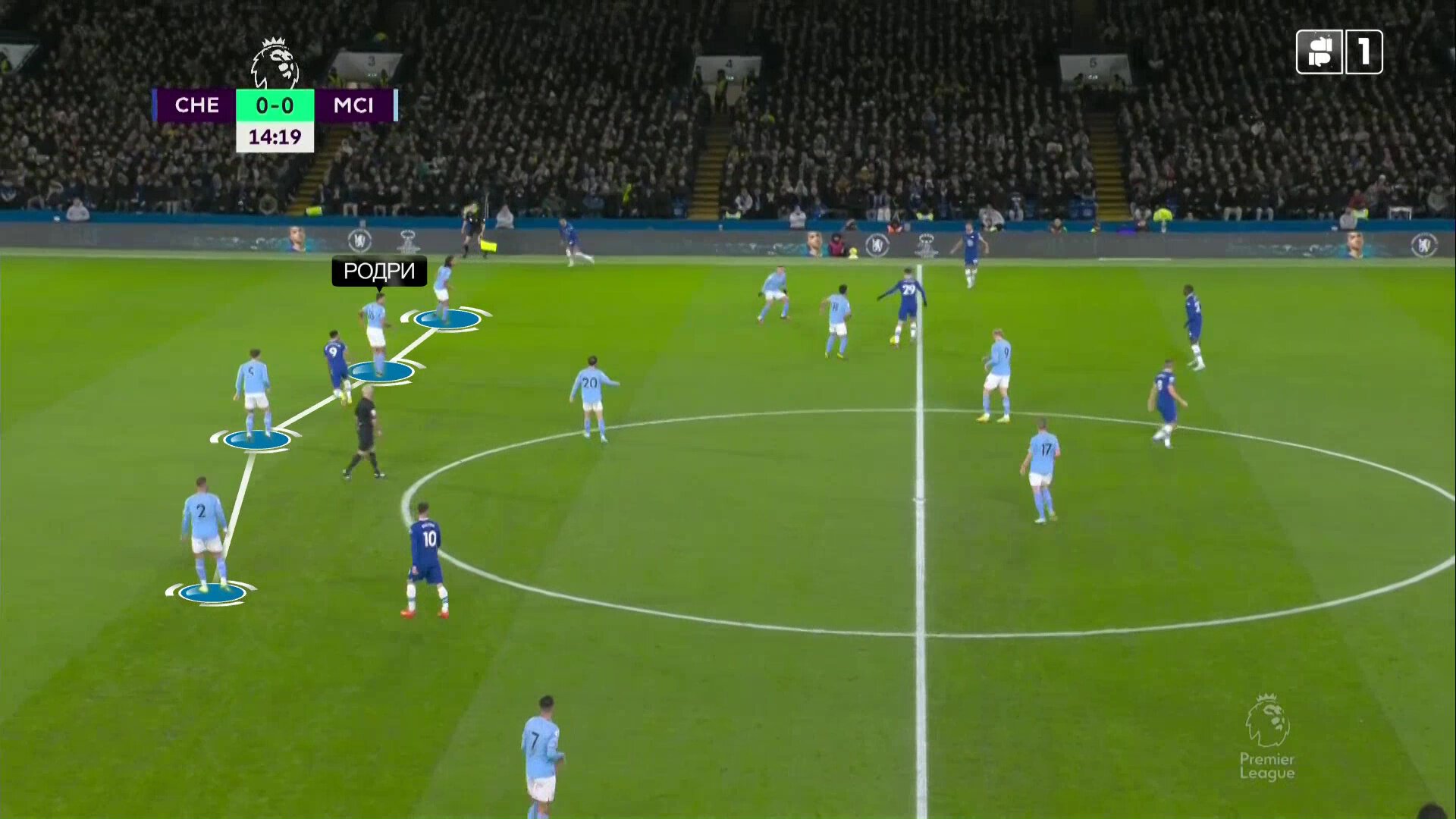 Havertz finds space when Gundogan went to the ball and Bernardo did not cover him: 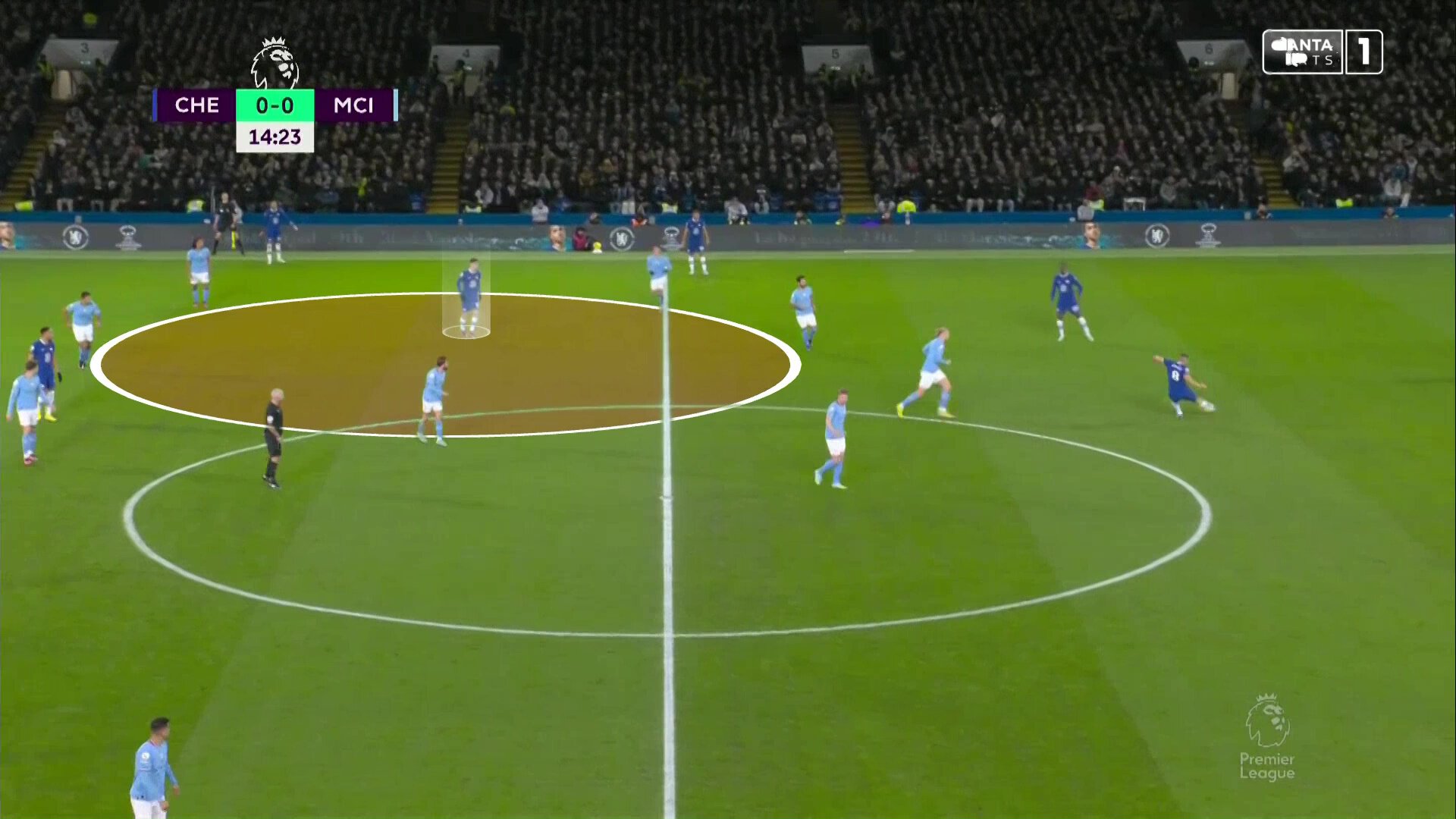 Usually it is Rodri who extinguishes such moments, but now he was part of the defensive line. Variations on this problem recurred regularly: 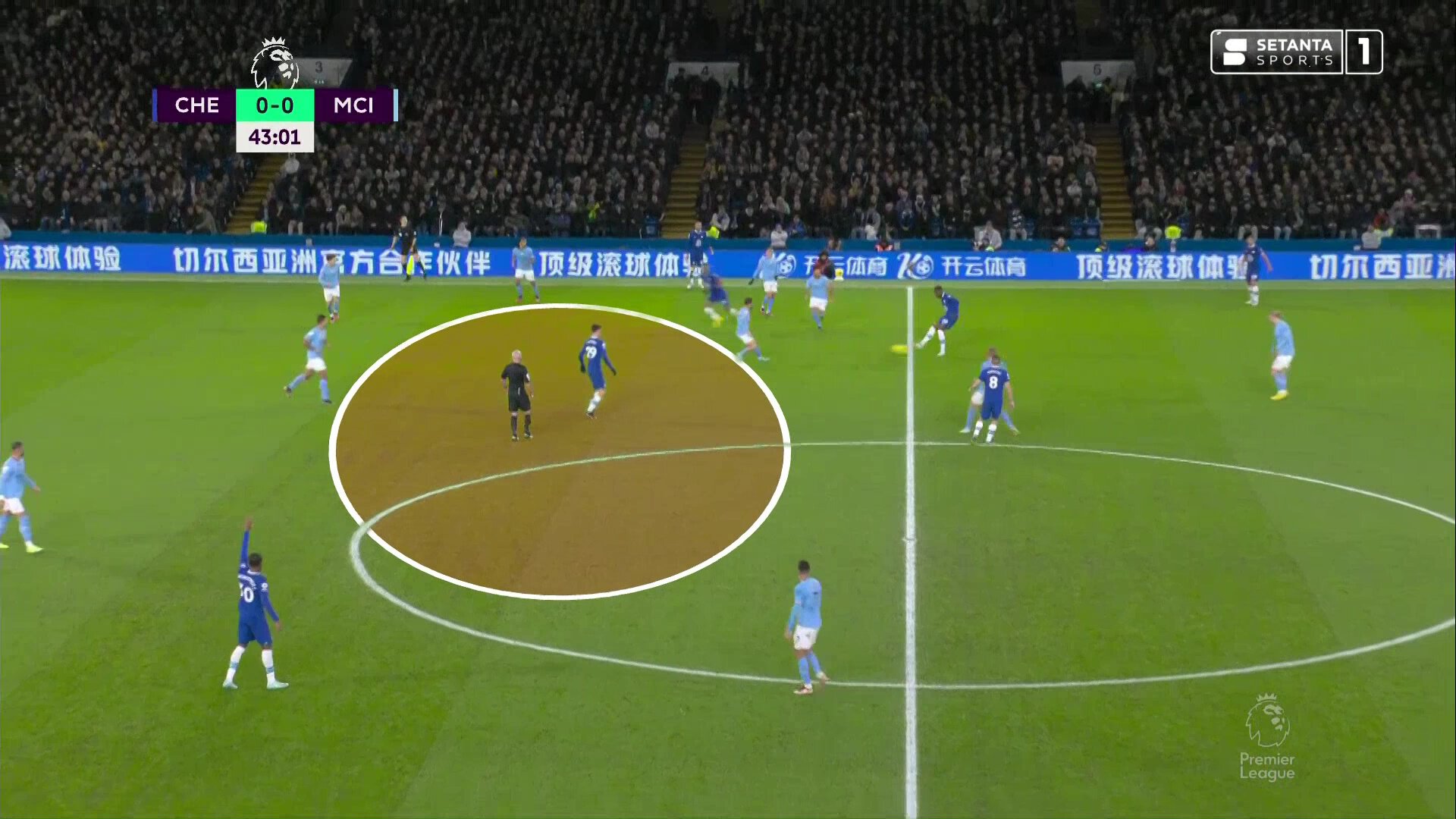 Most often, it was Havertz who enjoyed the benefits. The zone was a clear problem when Chelsea got to it. Except Potter’s team didn’t get to that stage of the attack often enough. City had a territorial advantage.

The right flank looked promising for the guests. Kovacic played in KDB with a personal orientation. Periodically, this led to a situation where De Bruyne fetters both Kovacic and Cucurella with his position. Such moments arose when Kevin made a dash to the last line: 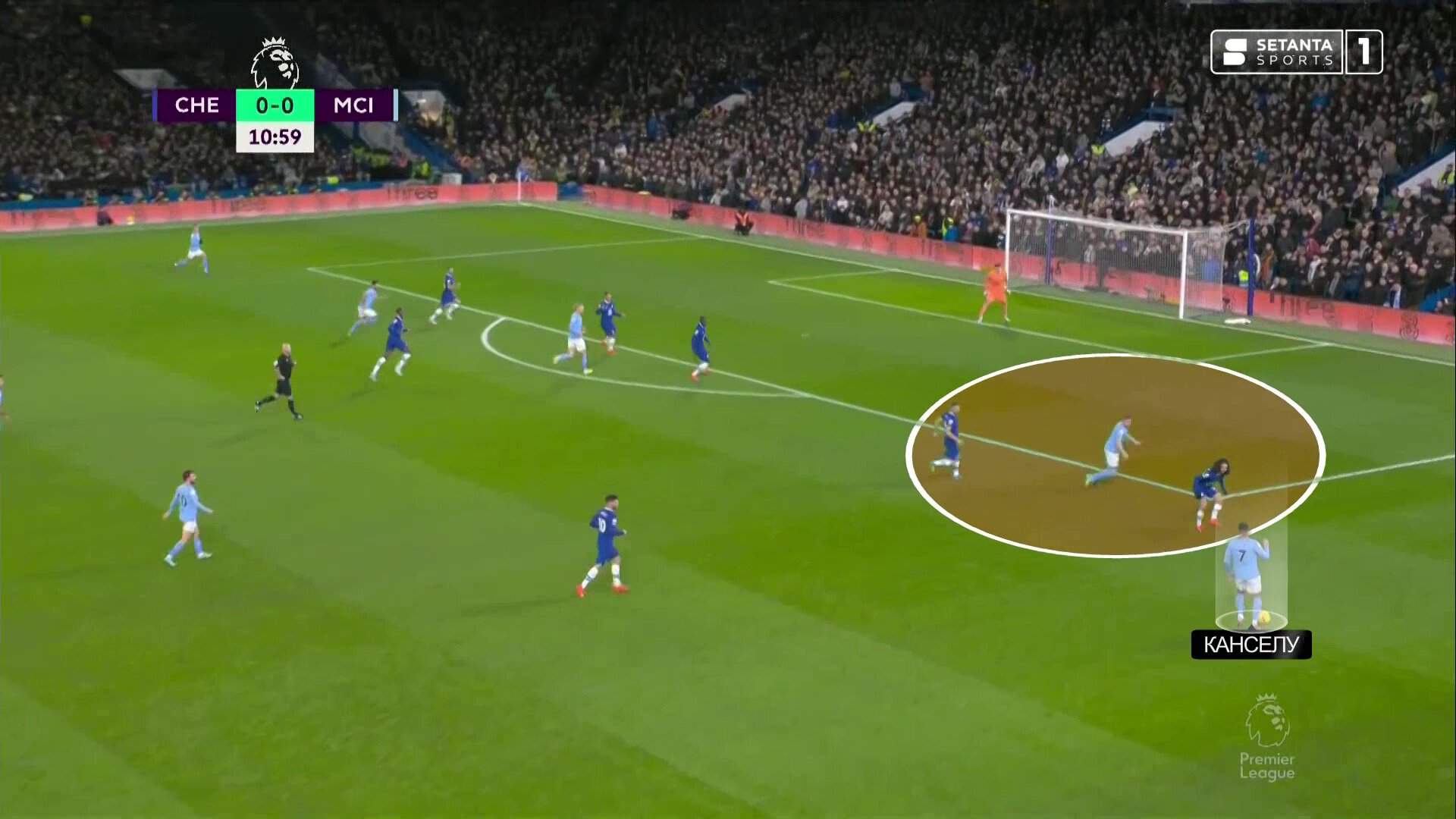 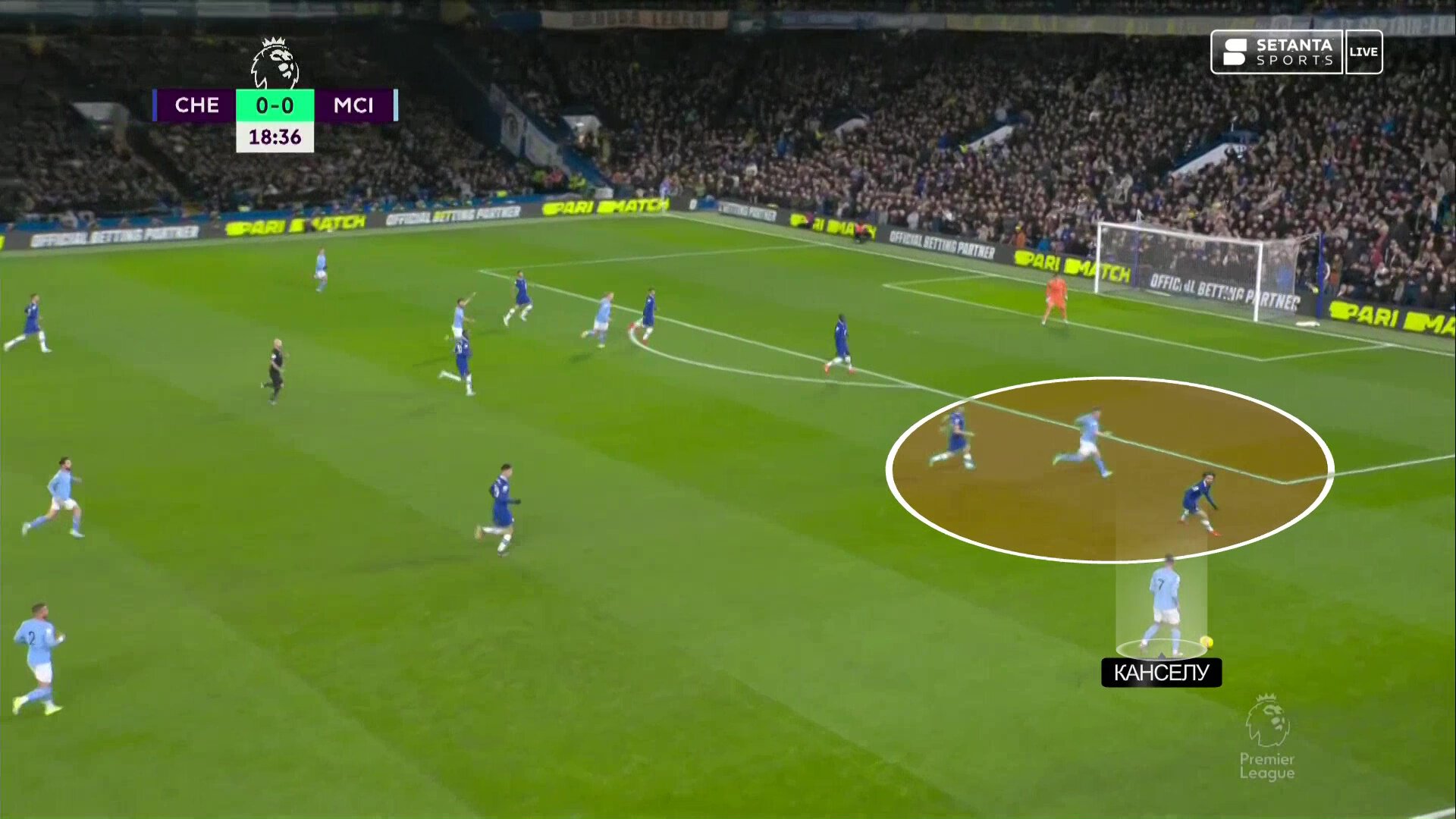 Canselu got the freedom to accelerate – then you can either go to the center (where there is no Kovacic, who is with the KDB), or move on Cucurella, who would have to meet the opponent at speed. Chic conditions for a player who knows how to act in isolation and is good at dribbling – alas, this role was not suitable for Cancel. He did not enjoy the advantages described, and his strengths (trips to the center for control, promotion and creation) were lost.

It is extremely significant that Pep’s attempts to turn the game around in the second half revolved around this position. After the first batch of changes against Cucurella, Bernardo Silva went to play, and then Riyad Mahrez came out there.

City improved through substitutions. We were better in the second half

Changes came immediately after the break. They concerned both performers and strategy. First came Manuel Akanji and Rico Lewis.

Now City had a different content in the first stage: the Stones, Akanji and Ake as defenders, Rodri and Lewis as defensive midfielders (Bernardo went to the right flank): 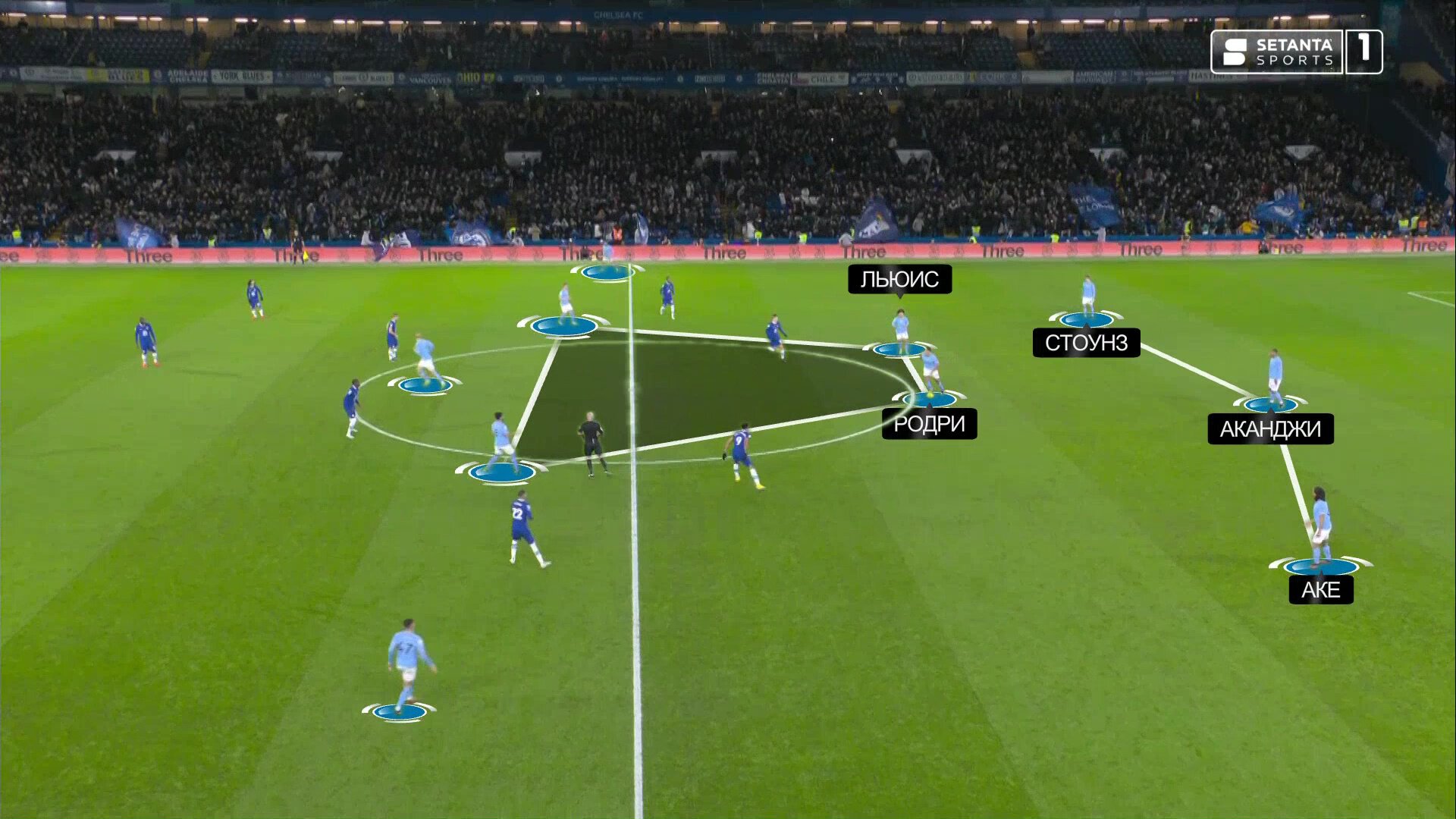 Lewis played the role differently. He rarely stayed close to Rodri – he acted more dynamically, making breakthroughs into someone else’s support and to the right flank. This made the game a little more open and City’s plays less sterile.

The second change was City’s boldness in pressing. In the first half, the team waited more often, and at the beginning of the second half, they constantly went into pressure. Chelsea began to get lost, which led to tackles in dangerous areas: 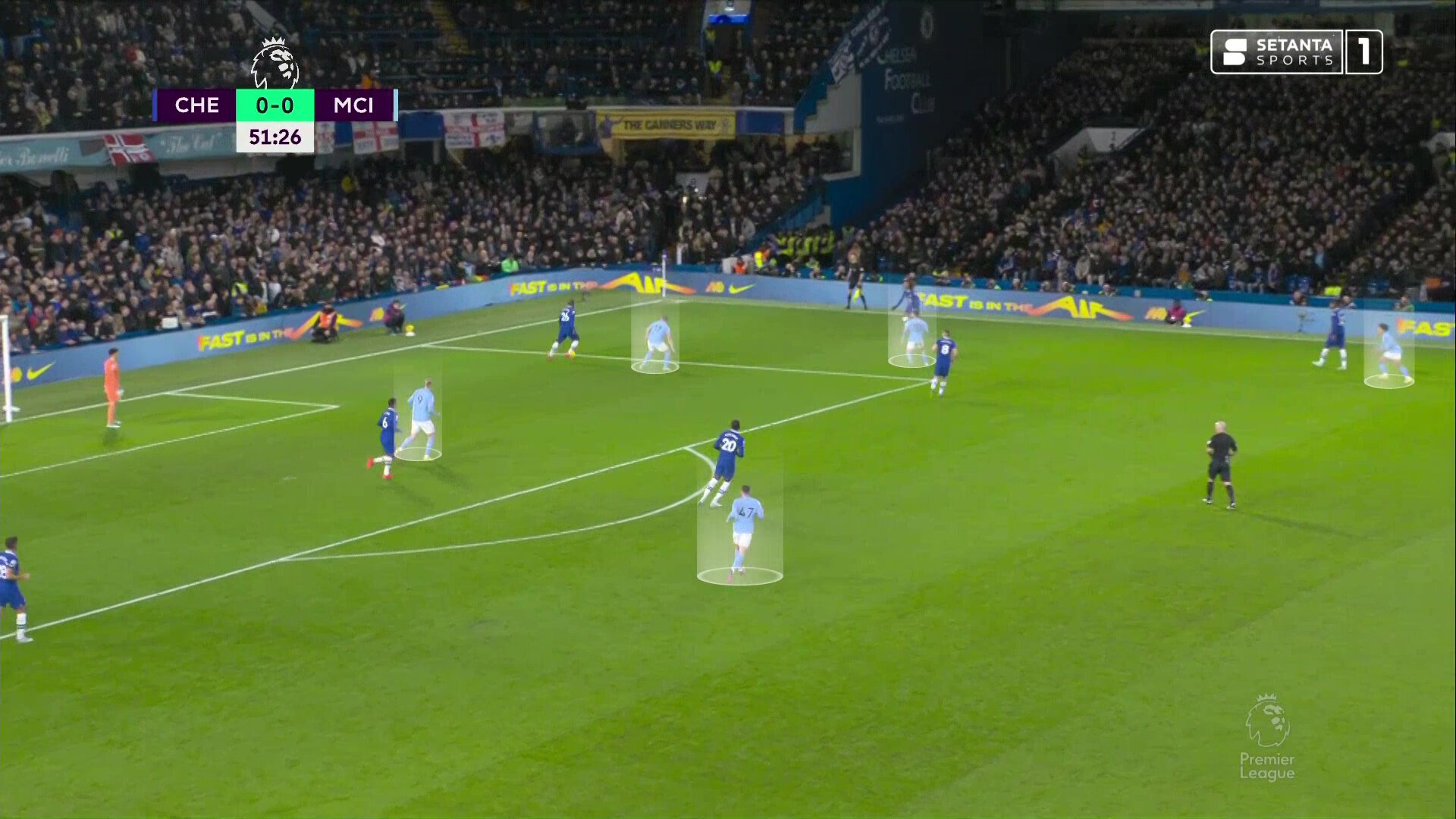 Along the chain, we got another content in the duel on the right – now Bernardo played against Cucurella. The situation described above is much more dangerous when the opponent can beat 1v1: 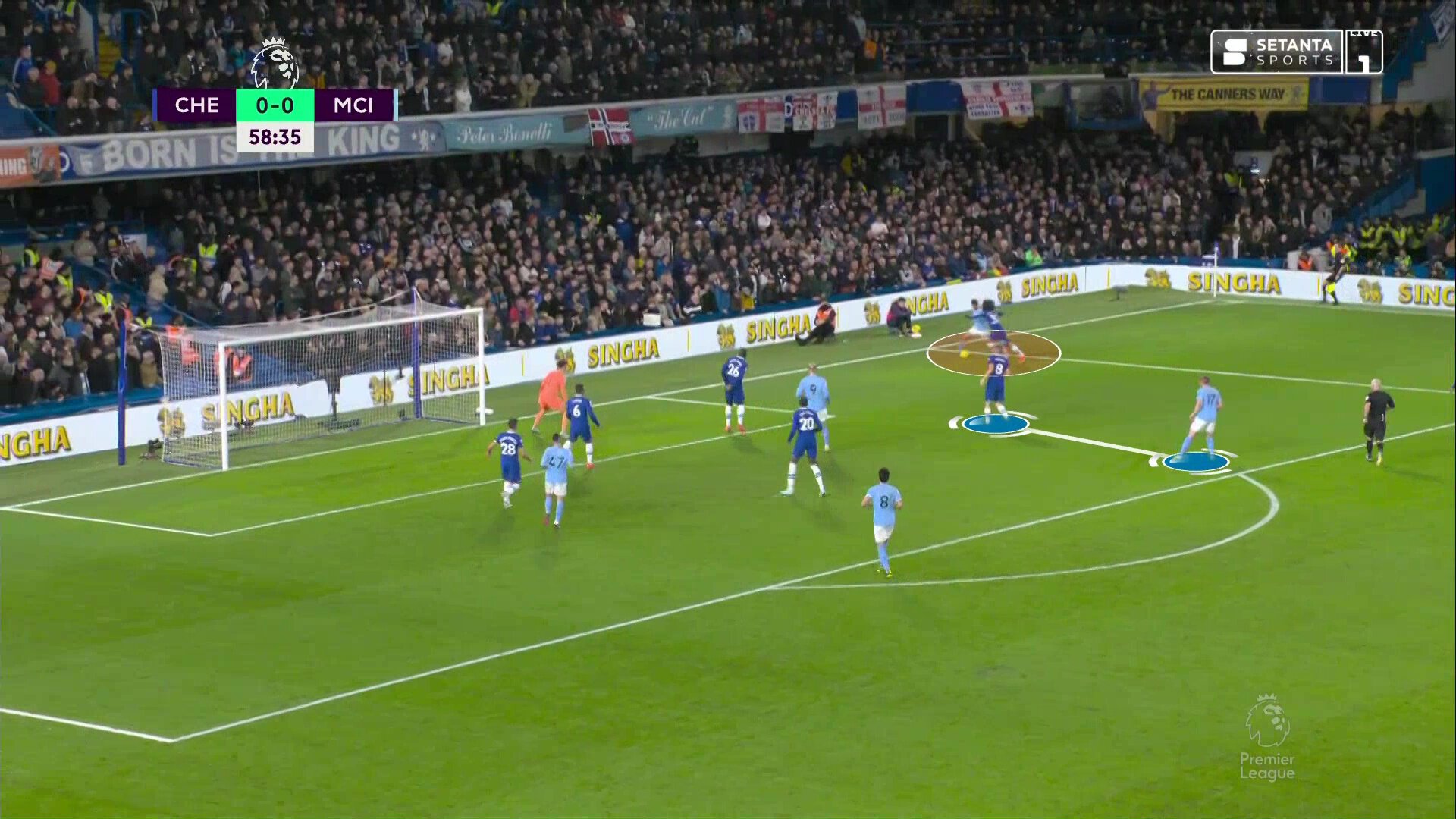 Kovacic was forced to unstick from the KDB right in the course of the episode, run for insurance, and Kevin remained free: 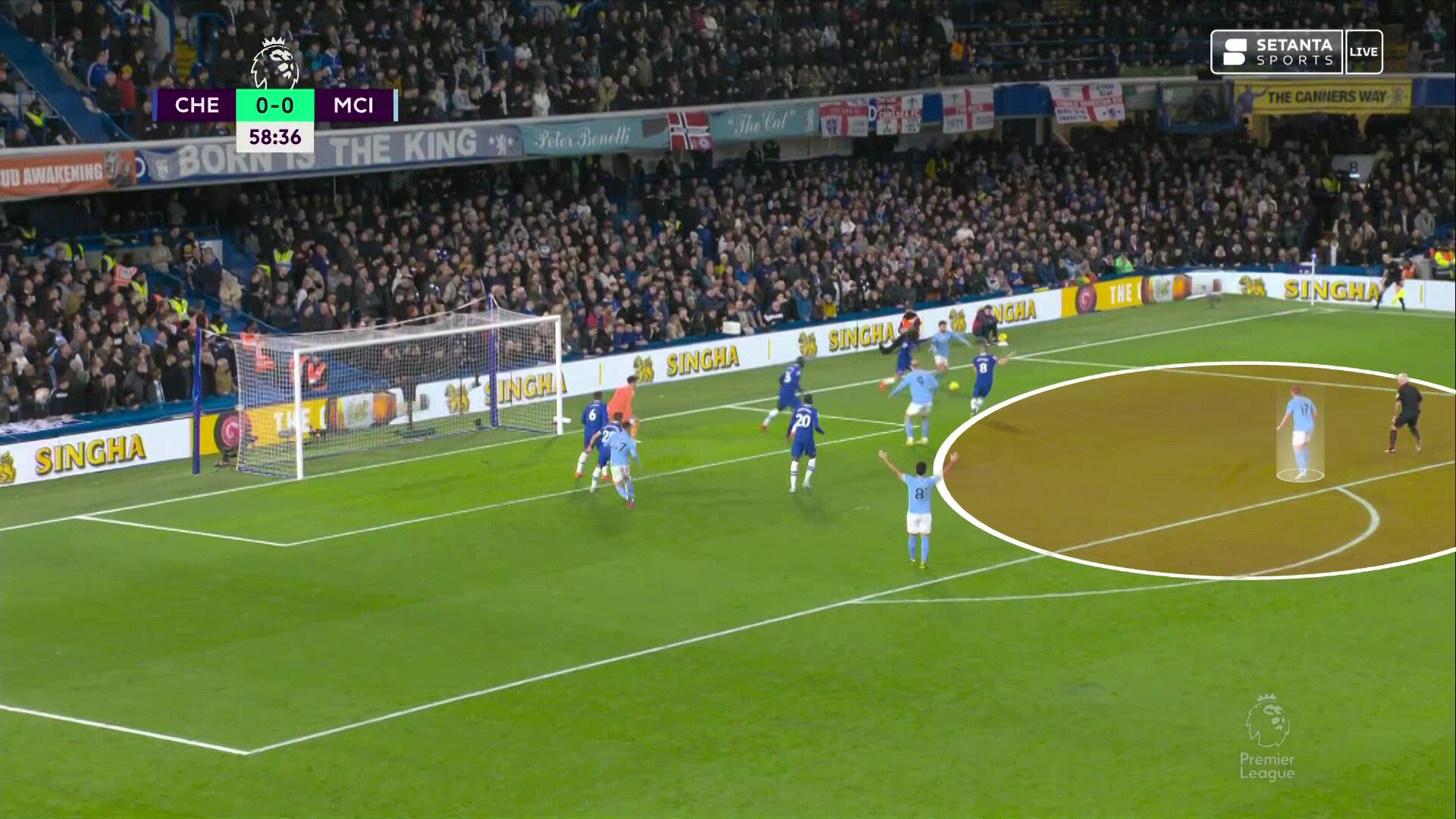 Later, Marez came out under this duel, who scored the winning goal. Although it was in that attack that Riyad simply finished from the penalty area, and the structural advantage came from Lewis’s more active role (relative to the first half). He opened next to De Bruyne and Gundogan, and did not stay in the support (played a role in advancing the attack): 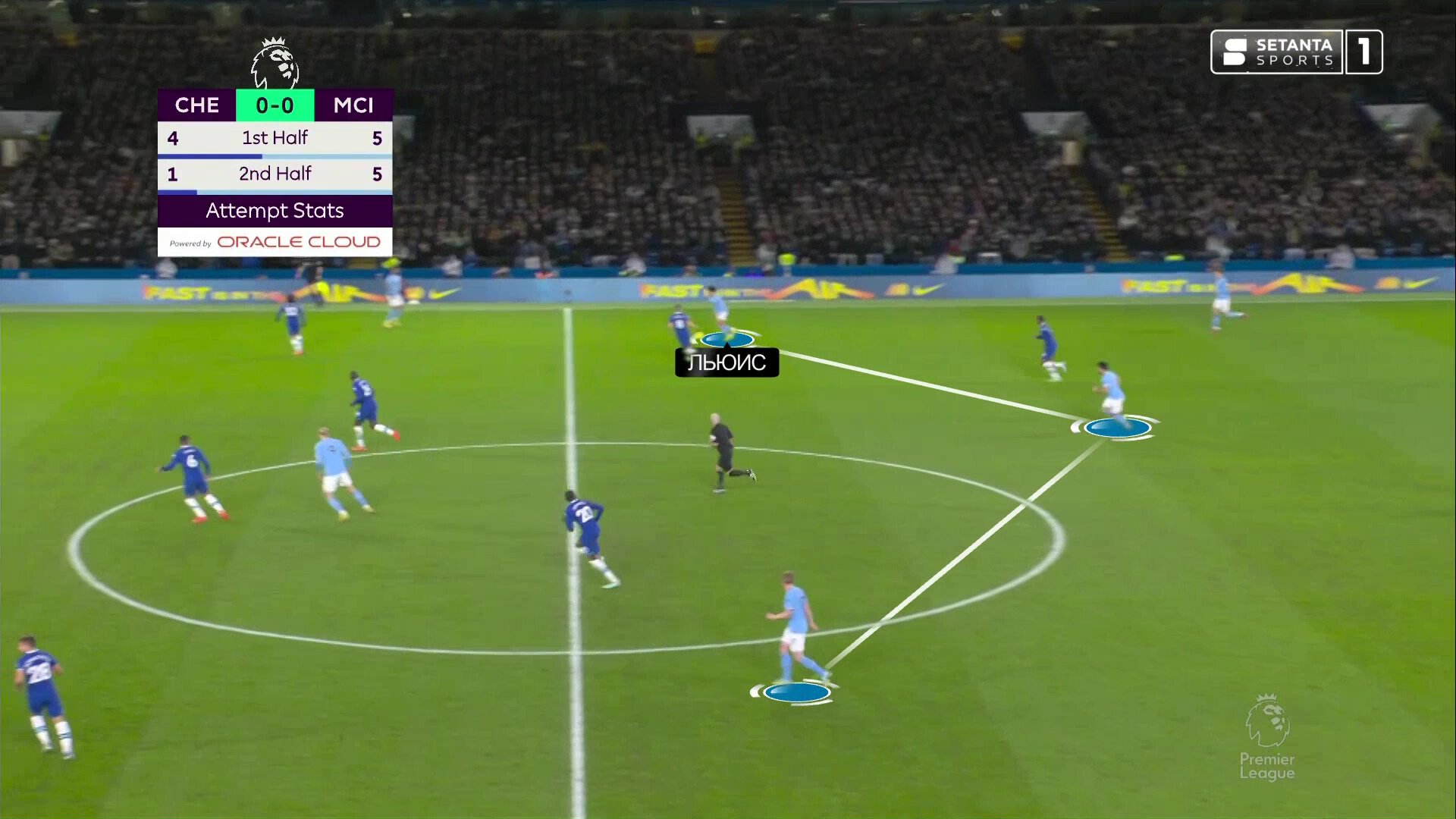 In the first half, the player in this position was located deeper, City passed confidently under pressure, but did not punish through such advances. Now Chelsea, after the initial failure of the pressure, could not keep up with the attack: 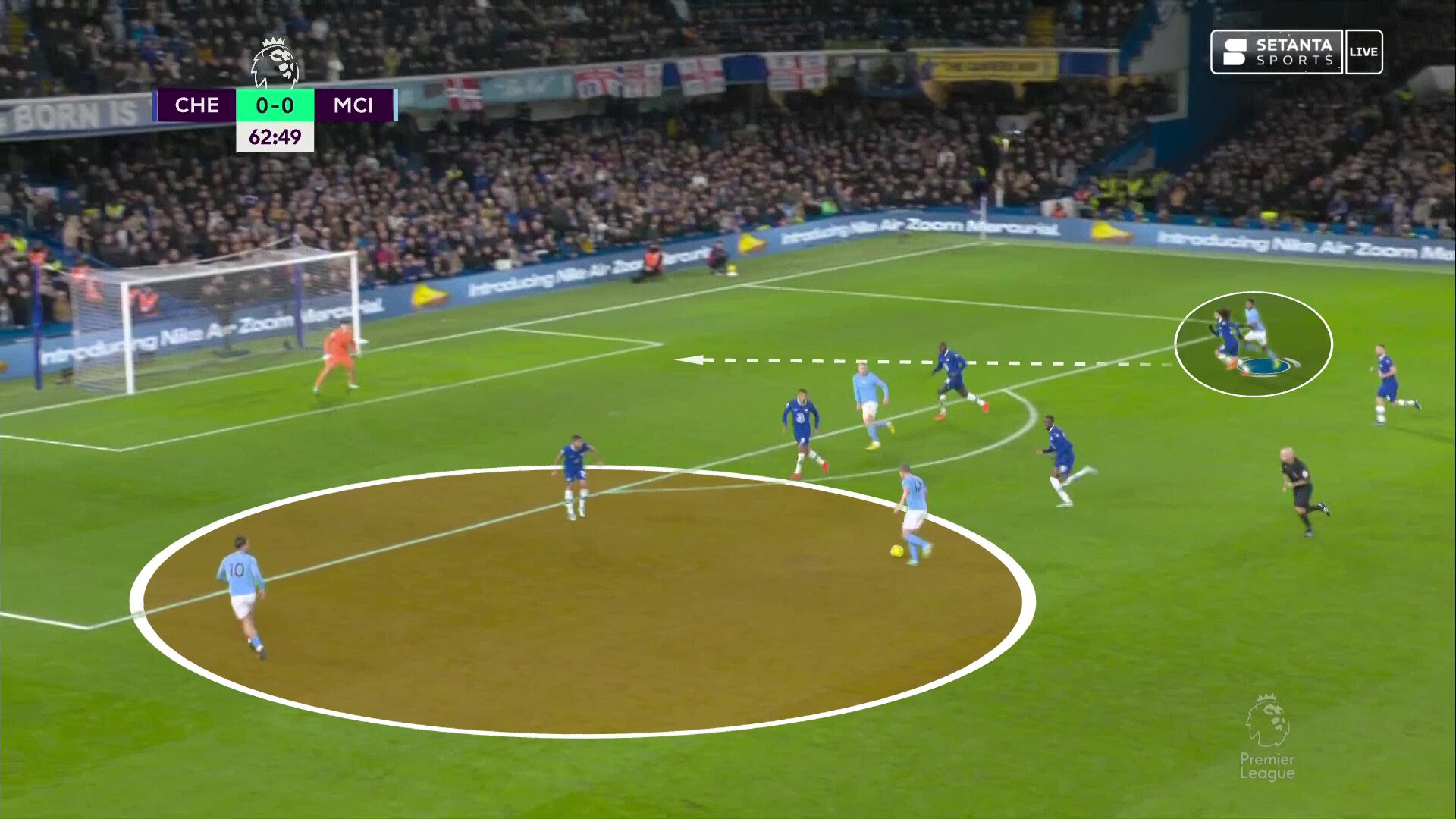 After an unsuccessful start experiment, Guardiola won the meeting via substitutions. At a press conference, Pep ironically called himself a “genius” . The replacements were good, but to complete the picture, two more details must be taken into account. First, they largely corrected the mistakes of the original plan. Secondly, in terms of substitutions, the coaches were not on an equal footing.

Potter was tied in being able to react as the second half progressed. Due to two injuries in the first minutes, he had only one window left for substitutions in the second half. An even more serious limitation was that there was no one to strengthen the attack. Lewis Hall (left back), Omari Hutchinson (right winger) and Conor Gallagher (in place of ten) came out – structurally nothing has changed, and Chelsea simply did not have an individual reinforcement.