“Overpaid” or “not overpaid” are some of the most frequently used arguments when discussing the game of an athlete. At the same time, polemicists often forget that the club invests in the player not only as a sports asset, but actually invests in the development of the city and region. And perhaps the best proof of such investments is Giannis Antetokounmpo.

Giannis is the Golden Hart for Milwaukee 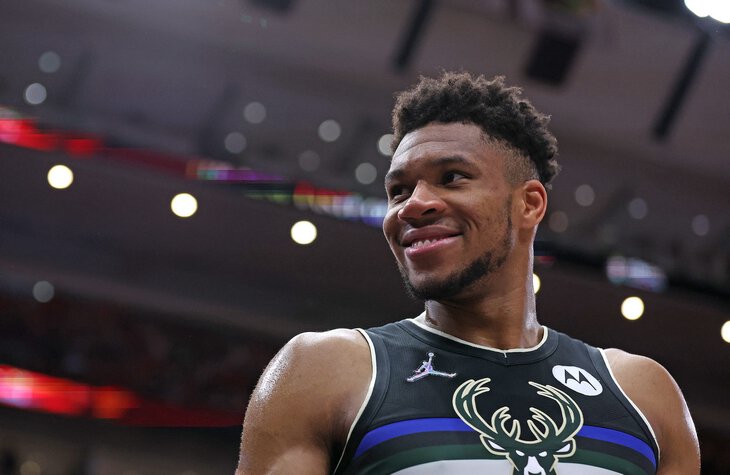 When it comes to finances, there is no point in flowery turns, everything is decided by numbers.

The Bucks were valued at $312 million in 2013 by Forbes (last in the league). Even the Bobcats, who recently had the worst season in history (2011/2012, 7 wins-59 losses), and they were higher (315 million). Today, the Bucks are estimated by Forbes at 2.3 billion, are in 15th place, slightly inferior to the Wizards (14th, 2.5 billion) and ahead of clubs like the Jazz (2.03 billion) and ” Timberwolves” (1.67 billion). Below Milwaukee, you can find such strong clubs as Portland (2.1 billion), Atlanta (1.98 billion), Denver (1.93 billion), Memphis (1.65 billion) . But comparisons to the Jazz and Timberwolves are revealing in that the pair are based in Utah and Minnesota, which are in the top 3 nationally based on aggregate metrics. The usnews.com ranking takes into account eight main factors: healthcare, education, economy, infrastructure, prospects, financial stability,

Wisconsin, whose largest city is Milwaukee, is in eighth place. It turns out that the Bucks, which are found in the state, albeit not much, but still inferior in a number of indicators to Utah and Minnesota, are more expensive than the Jazz and Timberwolves. The reason seems to be obvious – the recent championship, which increased both the interest of the neutral fan and the investor; the club showed that it is interesting to invest time and money in it. Only here tsimes is that such metamorphoses do not occur instantly. The club rose in price gradually, depending on the result, the main factor of which was the modest Greek guy, selected in 2013 at the 15th number.

In the 7 years prior to the 2013 draft, the Bucks made the playoffs twice (in the 2005/2006 and 2009/2010 seasons). In the 7 years after the 2013 draft, before taking the championship, Milwaukee went to the postseason five times. If you add up the difference, taking into account the Bucks’ biggest success of this century, it looks like this:from 2001 to 2013 the team has 7 wins in the playoffs, from 2014 to 2022 – 45 wins and one championship. And here it is important not to lose sight of the fact that the club earns money even in case of unsuccessful performances.

The Bucks playoff game is valued at an average of $3 million. And I’m talking about revenue outside the stadium. Sale of souvenirs, bars adjacent to the stadium. Match visits are part of many tourist programs and sports and social activities. Making it to the playoffs is a huge boon for a city, especially if there’s a Giannis-level player on the team. Milwaukee attracts a large number of tourists, both foreign and American. It’s been like that since the Jordanian Bulls, when Chicagoans traveled to other cities because all the tickets for the team’s home games were sold out. People come from everywhere to see Giannis,” said Visit Milwakee President Peggy Williams-Smith. 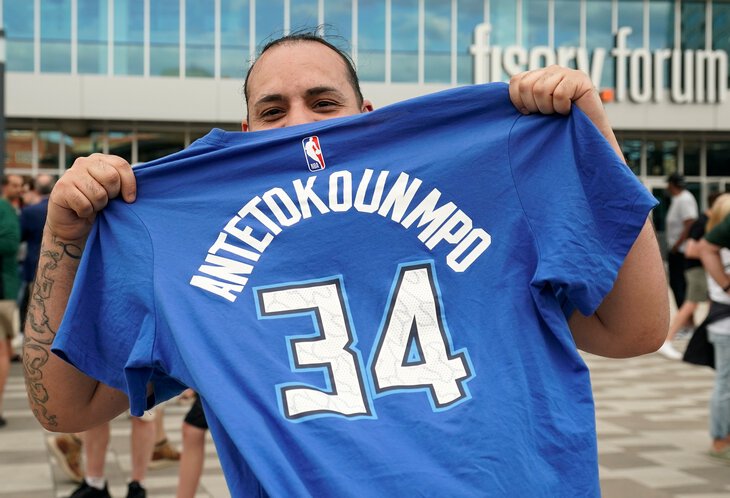 The young lady is not disingenuous, interest in the team is really serious. In terms of merchandising sales, Milwaukee is in the top 10 in the league. The Bucks sell branded merchandise better than the Knicks, Heat, Clippers, Rockets, whose markets are much larger than Milwaukee.

Of course, you should not attribute all the credit to Giannis. The club’s current owners, Wes Eden, Mark Lazry and Jamie Dinan, played a huge role in buying the club in 2014 and then investing 550 million in the construction of the new Fire-Forum arena. They also helped with the organization of the so-called “Deer District” – 30 acres of the territory adjacent to the stadium with bars, restaurants, hotels, entertainment centers. In 2023, the Marriott Hotel will be added to this splendor, which provides visitors with a myriad of ways to spend their savings. In addition, the Bucks front office and the City Council have plans to build business suites near the arena.

“If you want to win big, then you need to invest big. And I don’t just mean basketball victories. We want to create jobs, we want people to go to Milwaukee.For the duration of the final series, we signed a contract with ABC and Disney to broadcast matches on huge screens. Approximately 60,000 people came. We are going to expand the territory of the Deer District, we want to make it one of the main attractions of the city, ”said Bucks president Peter Feigin.

However, even the most skillfully calculated business cannot be considered successful without a pronounced face, without a person or symbol that determines the visibility of progress. For Milwaukee, it’s definitely Giannis. Compare the increase in income before he joined the club and after.

Giannis’ supermax and championship saved the city after the pandemic 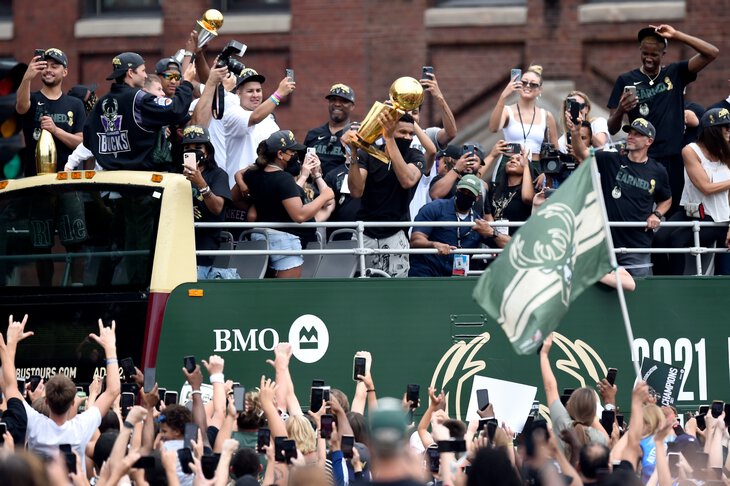 228 million over 5 years is still a huge number of buts and ifs, voiced immediately after Giannis signed a new agreement with the Bucks. For anyone but the people of Milwaukee. Everyone – from owners of small bars, pizzerias, clothing stores to curators of the Harley-Davidson Museum and the Milwaukee Art Museum – breathed a sigh of relief.

“COVID has wiped out the entire entertainment industry. Shops, hotels, restaurants were forced to suspend work or close. A huge number of institutions located near the arena depend on the attendance and success of the team. The fact that Giannis stays is a real salvation. At the very least, we have hope that people will return to the stadium to watch him play. This deal means a lot, not just to Giannis, but to all of Milwaukee’s SMBs. Little Greek restaurants began to appear in the city, even large chain establishments hold Greek weeks, because people want to join the Giannis culture, because he does so much for Milwaukee. His name is a guarantee for many businessmen. Hell, I took out an extra loan myself when I found out he had a contract extension.”

The same Peggy Williams-Smith of Visit Milwaukee fleshed out the influence of Milwaukee and Giannis on city life.

“Look, for the duration of one match, nearby hotels rent out about 2,500 rooms in total. Sometimes more. Sometimes less. It all depends on the opponent, the time of year, whether it’s a regular season or a playoff. To service 2,500 numbers, about 700 jobs are needed, which is $ 73,000 in taxes to the city’s treasury. It’s just about one match, ”Williams-Smith reported.

The Bucks have no problems with attendance, this is evidenced by the fact thateven in the depressing 2019, the club had 36 full houses, this is a club record at that time. What can we say about the championship, which cheered up the city after the active stage of the pandemic. 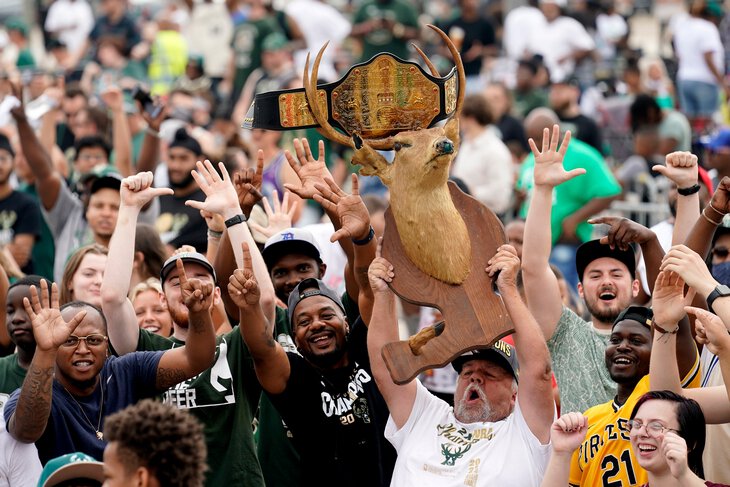 According to the Milwaukee Journal Sentinel,Milwaukee’s playoff audience spending was $57.6 million. Half of this amount came from the profits from the final series. The six-game streak against the Phoenix brought in $28 million, 5.8 of which the public spent on a Game 6 victory at the Fireserve Forum. Series against Miami (2.7 million), Brooklyn (12.8 million), Atlanta (14.1 million) also had a tangible effect on the city’s budget. People spent the most money on accommodation (8.4 million), entertainment (6.6 million), food and drinks (5.2 million). The winning deer run netted the city $1.11 million in taxes.

Any, even the most insignificant action of Giannis becomes an outlet for entrepreneurs from Milwaukee. The day after winning the title, the Greek, through one insidious social network banned in Russia, said that as a festive breakfast he ordered exactly 50 nuggets in the Chick-Fil-A eatery (by the number of points scored in the victorious, sixth game) .

“Hey, we got the title! Will you supply me with free nuggets for the rest of my life?” Antetokounmpo asked one of the employees of the diner.

“One more. Win one more. Then – there are no questions, ”the employee denied.

Despite the fact that Giannis did not manage to extort freebies, both were satisfied. The Greek left with a Larry O’Brien Cup in his arms, and over the next few hours, demand for nuggets at Chick-Fil-A skyrocketed.An 88% increase in traffic jams was recorded near one of the establishments. Residents of the city carried boxes of chicken in astronomical quantities as if there was no tomorrow.

The presence of Giannis attracts people from all over the world to the city, until recently known only for beer, cheese making and the wickedness of Jeffrey Dahmer. In an interview with the Milwaukee Business Journal, Bucks marketing director Dustin Godsey said that almost 75% of Bucks subscribers on one social network banned in Russia are people representing an international audience, and on another social network, which is also banned in Russia, about half of the subscribers are foreigners. According to him, this is directly related to the popularity of Antetokounbo all over the world.

“When you think that a person with such a reputation and talent represents Milwaukee as a market, as an investment area for global business, it’s really exciting. This is not only about sports fans, but also about tourists and businessmen. Giannis shows how the community of the city is open to everything new, to dialogue on completely different topics. The Bucks’ success in the playoffs is also an example of a successful business that spanned all kinds of downtown businesses. The Bucks are the center around which they exist,” said Todd Fisher, senior vice president of global sports and entertainment consulting at GMR Marketing.

Surprisingly, nothing has been heard about any major contracts between Giannis and local brands. Although this does not prevent Giannis from benefiting the city. Antetokounmpo has been featured in several BMO Harris commercials relating to BMO Harris Bucks Debit Mastercard banking services. BMO Harris Bank itself is headquartered in Chicago, and the company is one of the five founding partners of FireForum and the club’s official bank.BMO’s Milwaukee branch is one of the largest (3,000 employees), but the advertising campaign saw an increase in clientele, so the staff had to be expanded to 3,700 employees.. What is this if not creating jobs for the city? 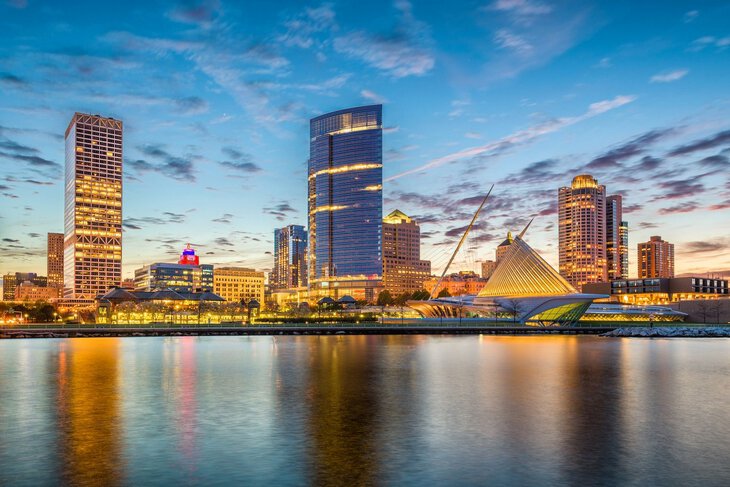 And of course, one cannot fail to mention the numerous Greek pilgrims. Greek journalist Harris Stavrou, who works for Sport24, has covered Giannis’ career since he was drafted by the Milwaukee.

“I’ve been to Milwaukee several times and I see how the Giannis effect is affecting the city. My first visit was in 2016 and now I see so many differences. The city is blooming. It becomes bigger, more modern, more beautiful. There are more people here. I remember I couldn’t find a hotel to stay in because it was full to capacity. I know a lot of people who want to come and see what Milwaukee is like. Moreover, they did not know about the existence of such a city 10 years ago. I’ve seen programs on Greek television that talk about the features and attractions of Milwaukee. But this city is not as popular as Rome, Paris or New York. Giannis has made Milwaukee one of the most desirable destinations for Greeks.”

It is clear that even the developing Milwaukee will not compete with business capitals like London, Tokyo or Shanghai, but this is not necessary. This is different. This is about a person who prefers to complaints and personal wishes, hard work to ennoble the environment in which he finds himself. And as you can see, he does quite well.