We get acquainted with Shimon Marchinyak.

The final of the World Cup was entrusted to the Polish referee Szymon Marchiniak.

And this is a remarkable event, because no European referee has officiated a World Cup final without a Champions League final since 1994. All decisive matches of the tournament were officiated by referees with a good background in the finals in their confederations.

Marciniak has come a long way before refereeing what is probably the biggest match of his career. Previously, he was a tough midfielder – he called one of the referees the worst in his career, and then worked with him

Shimon says that he was a tough midfielder (he played for the Polish Wisla) and constantly complained about the refereeing. Once the referee sent him off – Marchinyak said after the match that this was the worst referee in his memory. The referee replied: “If you think it’s so easy to judge, try it yourself.”

After the end of his playing career, Marciniak took refereeing courses – over time, international matches began to be trusted in him. In the game of youth teams under 21, Shimon even met with that referee:

“He accompanied me as the fourth judge. And I always told him that he made the right decision when he removed me! It’s a wonderful story.”

Marciniak believes that now playing experience only helps him: “If you played, then there is an understanding of how players react to different situations.” Before games, a Pole usually listens to music: “It helps me stay calm.”

How Marciniak worked: he made a mistake in the match of the Russian national team and missed the Euro due to tachycardia

Sometimes he gets into scandals, but in general he judges confidently.

• In November 2020, Marchinyak played noisily in Russia’s match against the Turks in the Nations League. Turkey got the right to a penalty, although Daler Kuzyaev seemed to have played the ball. 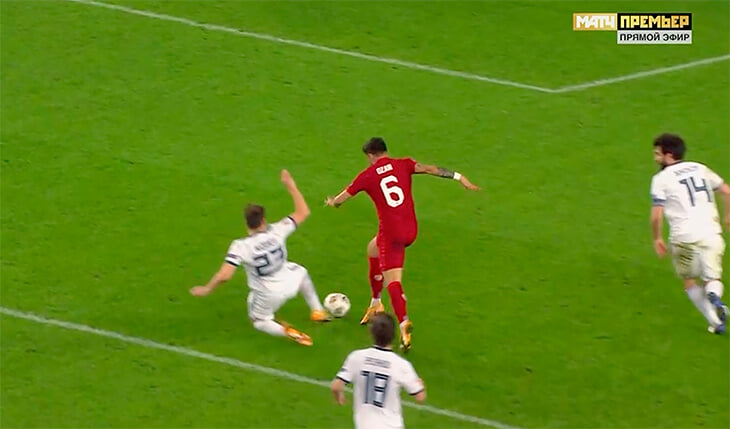 At that time, the Russians were already in the minority (Semenov was removed in the case) and were losing 1:2. Turkey realized the chance.

It is doubly disappointing that the Russian national team scored the second after that – but instead of a draw, they made only 2:3.

• Marciniak also worked at Euro 2016 (3 matches, last in round of 16) and World Cup 2018 (2 group matches), but missed Euro 2021 due to the effects of the coronavirus. “I got tachycardia, which disrupts the rhythm of the heartbeat. At some point, the pulse quickened even in a sitting position, as if I were walking briskly, ”said the referee.

With this diagnosis, high loads are prohibited. But Marciniak worked in Poland anyway: “The difference in intensity compared to the Euro is huge.” He was not so sad about missing international tournaments.

“I know that there are more important things in life than work and judicial affairs. Although I must admit that the last two years have been very difficult for me. First a spinal injury, and now a coronavirus, ”the judge shared in April 2021.

• As a result, he only has one match in the 2020/21 Champions League. Marciniak merrily adjudicated the meeting between Leipzig and Paris – with two penalties and red cards. The arbitrator rightly removed Guye and Kimpembe, which helped the Germans win – 2:1.

Marciniak generally likes to point to the point – he appointed 17 penalties in 39 Champions League matches, 11 in 18 LE games.

• In Qatar, the 41-year-old referee only played two games: France 2-1 Denmark in the group and Argentina 2-1 Australia in the round of 16. It is noteworthy that both teams eventually reached the final, where a Polish referee is also waiting for them.

“I dreamed about it since childhood. When I played football, I thought that maybe I could become such a good player that I would win the World Cup.

Now I am a football referee, and for a referee, working at the World Cup final is like raising the World Cup. But, of course, this feeling will appear only after we have worked this match well,” Marciniak said before the final.