Juve did not miss 769 minutes before meeting with Kwara.

Dominance in the match of the leaders of Serie A: Khvich Kvaratskhelia tore apart Juventus and brought Napoli the most important victory for the championship race. 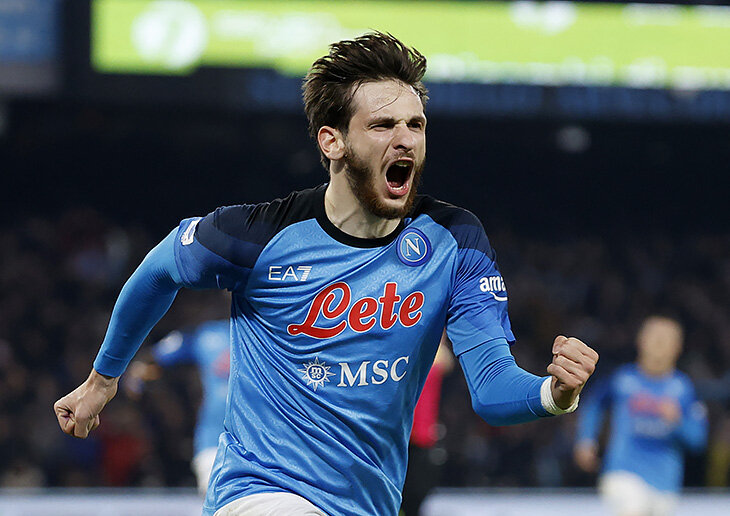 If it seemed to someone that the Neapolitans, after a pause for the World Cup, would stop breaking the league, they lost to Inter at the restart. But now – the most powerful 5:1 against Juve, the main pursuer.

And one of the key roles here is with Khvichi.

Khvichi’s acrobatic kick is a delight. It’s a pity that I didn’t score myself, but Osimhen added

One of the heroes of Napoli’s super season habitually came out on the left side of the attack and in the 14th minute brought the entire San Paolo to its feet.

Khvicha rushed to the center of the penalty area, jumped out on the canopy of Matteo Politano and found how to hit the ball at an uncomfortable height. The beauty! It is a pity that Wojciech Schensny canceled the masterpiece.

But Victor Osimhen, another monster of the Neapolitan attack, immediately finished off and opened the scoring. Here’s how it was:

Juventus moved more actively, Angel Di Maria slammed into the crossbar, and Napoli retreated to their goal for a while.

To prick at the end of the half. Defender Bremer unsuccessfully took the ball, Osimkhen passed to free Khvicha – and the Georgians easily decided the episode.

One ball by Angel di Maria at the end of the first half did not change anything. Neither during the match, nor personally for Khvichi.

Khvicha and Osimhen reigned: the two of them are the most productive in Serie A

Kvaratskhelia got hit in the leg in a terrible tackle from Danilo – put him on a yellow card, but calmly continued to play. The pain didn’t seem to bother him.

In the second half, Khvicha added two more official assists (however, a kick through himself will not be included in the statistics, it will only remain a pleasant bonus and a bright episode from highlights): first he gave a goal to Amir Rrahmani, and ten minutes later – again to Osimhen, the Nigerian striker made a double . Elif Elmaz came on as a substitute and brought it to an indecent 5:1.

Total: Osimhen finished off Khvicha after hitting, Osimhen assisted Khvicha, Khvicha assisted Osimhen – Juve’s defense did not cope with this duet at all. 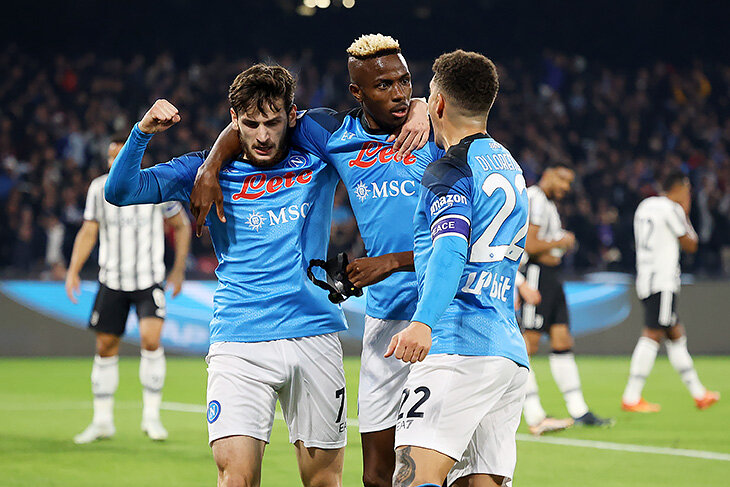 • Hvichi’s Serie A goal is his seventh. And now there are 14 effective actions. Only a teammate is cooler in the league – Osimhen has 12+3.

• Khvicha doesn’t score in every big game, but the collection is growing. He scored the winning goal against Lazio, made an assist with Liverpool, scored and assisted against Ajax. Now – such a performance in the top match with Juventus.

The dry Juve super series cracked. When they received the previous five, Allegri himself scored

The match was also expected as a confrontation between the best attack of the championship (39 scored against Napoli) and the main defense (Juventus conceded only seven goals).

Juve came into the match with a splendid streak of eight clean sheets in a row with a total difference of 14:0. During this time, for example, we beat Lazio and Inter. Before the trip to Naples, the Turints allowed only from Milan – three months ago, on October 8.

The dry series of Juventus lasted 769 minutes – Osimhen, with the participation of Khvichi, stopped it. In one game, Turintsy conceded five, although before that there were only seven in 17 games.