The semi-final of the tournament in Adelaide between Daniil Medvedev and Novak Djokovic promised to become a blockbuster, but in the end ended in a rather convincing victory for the Serb – 6:3, 6:4. 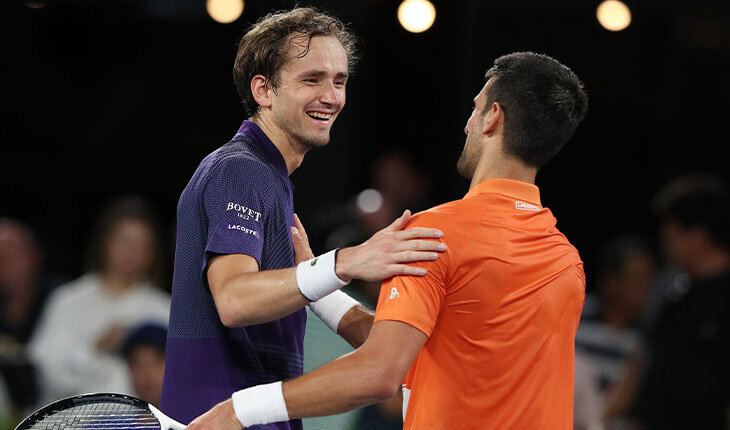 The most disturbing event for Novak in this match was a thigh jerk in the first set.

In the middle of the game, Djokovic unsuccessfully rushed after the ball and after that he felt discomfort – he constantly stretched, and after the game he even took a medical break, during which he was given a tape and a pill to relieve inflammation.

Then for some time he did not move as clearly and sharply as we are used to, but in general he did not slow down in the game. And after the match he said: “Fortunately, nothing serious, otherwise I would not have been able to continue. I just took a medical break, took anti-inflammatories, and within a few games I was back on track.

I tried not to slow down, not to let him take my serve. This was the most important thing. I knew that eventually I would have a chance.

The longer the match went on, the more the thigh warmed up, the better I felt. I hope everything will be fine tomorrow.”

At the same time, he admitted that he was thinking about withdrawing so as not to aggravate the situation before the Australian Open.

“During the match, I thought about Melbourne. But you can’t calculate on the court. At this stage of my career, every match is very important, it’s almost like a gift, so I try to give my all and win in any circumstances.

Interesting and something else. When Djokovic took a 5-3 lead in the second set, Medvedev did something similar to his stretch and smiled towards his box.

And then in the game, having caught up with the shortened one, he jumped the way the Serb did after the injury.

Match commentators concluded that it was a parody of Djokovic. And in social networks they wrote that Medvedev ridiculed him.

Anyway, after the match, they hugged very warmly.

What brought Djokovic such a convincing victory?

1. Submission. She was phenomenal on Saturday. On the first serve, the Serbian lost only four points. She brought him results both in the form of unaccepted balls, and in the form of a good preparation for entering the net or a crushing first blow.

2. And on the second ball, Novak was generally successful – he won 54%. For their matches with Medvedev, this is a very serious figure, because they both love and know how to attack the second serve. 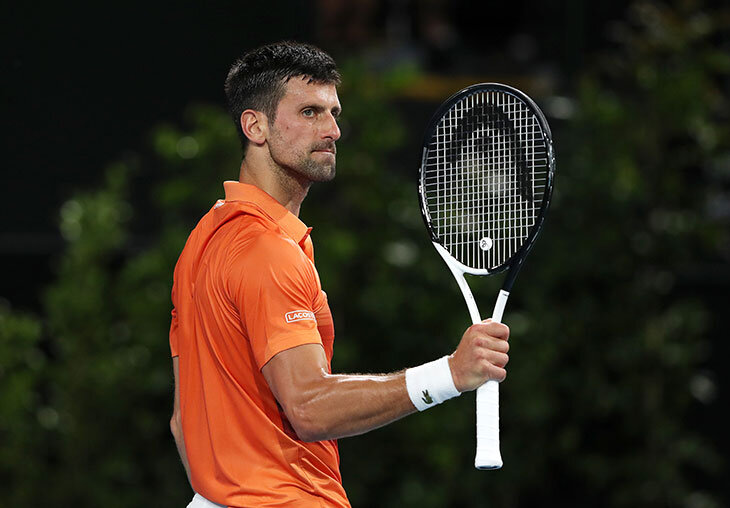 The Serb’s most valuable performance was, of course, on a break point with a score of 4:3 in the second set, when he laid down the second ball at a speed of 200 km/h. After the match, he was asked about this, and he himself was surprised that he dispersed him like that.

3. It is quite possible that this pitch was like a response to Medvedev – who, on both break points of the Serb (in the first and second sets), did doubles, just going for very aggressive feeds. It is possible that Novak meant to say: “You did not succeed, but I can.”

It is also interesting that after the match, he said that on break points he deliberately took an aggressive position at the reception in order to force Daniil to take risks – and in the end it worked.

4. In general, Djokovic was very tenacious in key moments. A simple illustration – in the first set, he won back a break point with a magic line transfer from forehand, when Medvedev tried to squeeze him into the right corner.

The most interesting thing is that in the previous draw he missed exactly the same blow. But this did not affect his mood, his tactics. He knew the idea was right, it just needed to be executed better – and he did it when it was needed the most.

5. In general, from a tactical point of view, the match was interesting in that Novak at first practically did not use the exits to the net at all – which were his base in the last matches with Daniil.

He simply outplayed him on the back line – even in backhand-backhand exchanges, which in 2021 often remained with Medvedev. Novak was helped in this not only by stability, but also by variability. He used slices more often to pull the rhythm, played with angles more effectively.

6. Over time – especially after the injury – he began to go to the net more often, both immediately after the serve and in exchanges. At the same time, it was impressive how sightedly he always chose the moment to take the lead and how cleverly he played there.

For example, here he moved Daniil along the baseline, threw a walley in the opposite direction (so as not to open the corner for a forehand dribble on the move) and calmly scored after a soft answer. Fabulous.

7. As for Medvedev, there was a feeling that only towards the end of the match did he play with the intensity that would allow him to fight for victory. For example, with the score 3:4, 30:30 finally found the answer to a wide serve into the first square and out to the net.

But by that time he was already losing with a break, and Djokovic warmed up and was very, very good. Yes, and such answers to the questions asked by the Serb were rare.

Often, Djokovic was the one who effortlessly took points.

Obviously, if they meet at the Australian Open, Daniil needs to improve.