Life at Lilleshel Hall is not like a fairy tale.

New Year’s holidays are the best time to watch all the Harry Potter films and dream about an owl from Hogwarts. How about a letter from Lilleshel Hall? That was the name of the English school, where in the atmosphere of an old castle they taught the magic of football. Among the graduates are full of familiar names: Jamie Carragher, Jermain Defoe, Michael Owen and other stars of the 2000s.

The castle is not that old. It was built at the beginning of the 19th century, but the architect was inspired by the Tudor era

Lilleshel is a tiny town of fifteen hundred inhabitants an hour north of Birmingham. The abbey located here was founded in the 12th century, but only picturesque Gothic ruins remained of it. Later, metal was smelted and coal was mined in Lilleshel, and today the main local attraction is an old mansion that belonged to the Scottish aristocratic family of Leveson. He has owned the land since 1539, when King Henry VIII closed monasteries throughout England during the Reformation, including Lilleshel Abbey. In the 17th century, a mansion was built on the estate, which existed until 1818. It was dismantled, considering it small and old, and a new one was erected on this site – a three-story stone house, stylized as a Tudor castle.

The project was entrusted to Geoffrey Wyattville, a well-known architect who by that time was in great demand and received orders from all over Britain. Wyattville’s most famous work is the reconstruction of the royal residence, Windsor Castle. He also rebuilt Kensington Palace in London, where Prince William of Wales has been living since 2013. After his death, Geoffrey received a great honor: he was buried in St. George’s Chapel in Windsor. Today, Elizabeth II, George V, George VI, Princess Margaret, Prince Philip and many other members of the royal family are also buried here. Wyethville remodeled Windsor Castle in the 1820s and 1830s

Lilleshel Hall was built as a hunting lodge, but, of course, with all the amenities and attributes of an aristocratic life. Oak living rooms, stained-glass windows, a luxurious staircase, terraces overlooking a well-kept garden, a greenhouse – the mansion had everything without which it is difficult to imagine the hunting of the British nobility of the 19th century. True, the Leveson family owned the house for less than a hundred years. During the First World War, the estate changed hands, and in 1927 it was bought by wealthy businessman Herbert Ford. Under him, Lilleshel Hall turned into a golf club that still exists. And during the Second World War, there was an orphanage inside. The England team trained at Lilleshel Hall before the 1966 World Cup. And the “football Hogwarts” mansion was nicknamed thanks to the former Manchester United striker

In 1949, the state bought the mansion and the gardens around it. Two years later, the National Sports Center was opened in the castle. People came here for training camps and competitions in cricket, basketball, track and field athletics, tennis, archery, fencing, judo and football. Fields and grounds were built at public expense – often with royal grants, so Lilleshel Hall was regularly visited by Elizabeth II (she opened the center when she was still a princess) and her husband Prince Philip. In the early 1960s, a hostel for athletes appeared at the mansion. In 1966, England footballers spent the night here for several weeks. Before the home (and victorious) World Championship, the players of the Alpha Ramsey team trained in Lilleshel Hall. 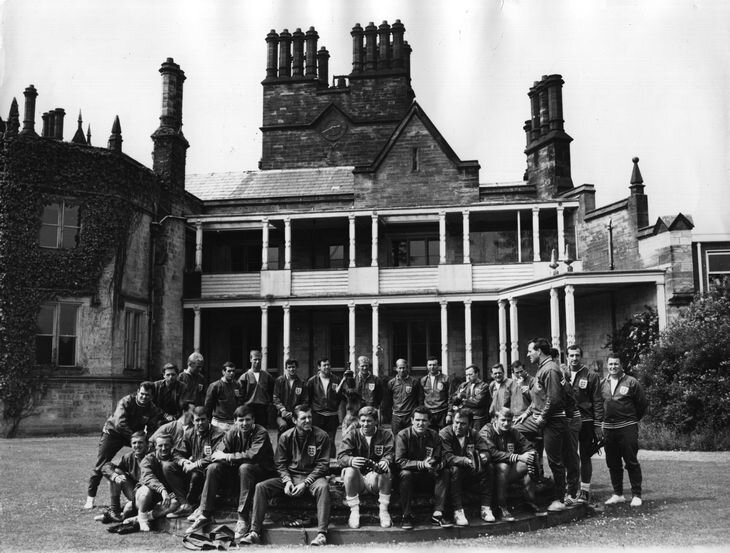 England team at Lilleshel Hall in 1966

And yet the glory of the most important football center in England, the estate acquired only 20 years later. Here, in 1984, a school was opened, founded by Bobby Robson. At that time he was coaching the English national team, and he was assisted by the technical director of the Football Association, Charles Hughes. They set out to create a prestigious academy for the top 16 14-year-old players.

To do this, the most severe selection took place throughout the country: 2000 candidates fought for the right to train under the guidance of the country’s best specialists. Later, the school held several more selections: in 1992, Jamie Carragher got to Lilleshel Hall, and the estate of the Leveson family made a strong impression on him. “This is a real palace,” recalled the ex-Liverpool defender. – Even before you get to the mansion (it was simply called home by the players), you need to go through the “Golden Gate” – an exact copy of those in front of Buckingham Palace. After that, it will hardly surprise you if Her Majesty drives a Land Rover nearby.

Four years later, Danny Webber was taken to the academy. Later, the striker tried to get to Manchester United, but did not play for Sir Alex Ferguson’s team, but in the 2000s he gained a foothold in Watford and then Sheffield United. It was Webber who first compared Lilleshel Hall to the school of wizardry from the Harry Potter universe. 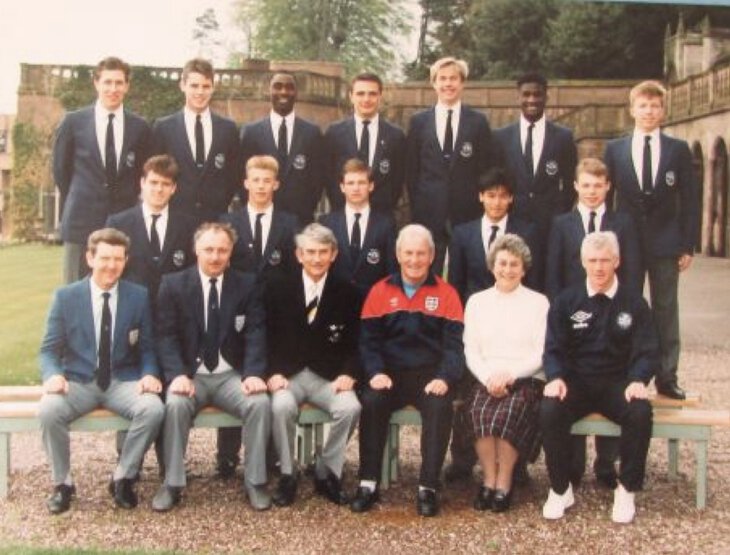 “It’s just like at Hogwarts,” the football player described life in the castle. “But it was a little creepy, especially the first few nights. The castle is always quiet, and when you go outside at night, everything is pitch dark.”

Lilleshel Hall began to be called “football Hogwarts” at best in the late 1990s. The book “Harry Potter and the Philosopher’s Stone” was published in mid-1997 – a year after entering the football academy Danny Webber. Prior to that, a comparison with Eton College, a prestigious school in Windsor, where members of the royal families, David Cameron, Boris Johnson, Hugh Laurie, Ian Fleming, Aldous Huxley, George Orwell and other famous Britons, studied. There are also many well-known names on the list of Lilleshel Hall students: Joe Cole, Ashley Cole, Jermain Defoe, Scott Parker and Michael Owen. But Frank Lampard and Steven Gerrard did not qualify.

Few liked the school. For example, Owen called her an absolute horror and for the first two months she was constantly crying. Joe Cole also did not appreciate the move to the 19th century apartments away from the big cities and often called his father asking him to take him home.

Danny Webber was sad not only because of the gloomy interiors, but also because of the busy schedule. “On Monday morning – classes at school, in the afternoon – training. On Tuesday, training in the morning, and lessons in the afternoon. On Wednesday all day at school, late in the evening training or game. Thursday and Friday is school. There’s still training on Friday. If you missed classes, you will have to catch up in the evening. On Saturday, the pupils go to watch the match of adult teams. Sunday morning game. If you’re lucky, in the afternoon you can get out to nearby Telford and go to the cinema. There was no time to be bored, ”the attacker described the life and studies.

The teenagers got up at 6:45, had breakfast, made their bed, cleaned, polished their boots and changed into their school uniforms – another sign of prestige. An hour after waking up, the players boarded the bus that took them to lessons. There they studied with ordinary children from the neighboring town of Shifnal. Conflicts often broke out with them – mainly because of girls who were more interested in athletes. They looked much older than their peers – most likely due to a specific approach to training. There they focused on strength and endurance, and only by the end of the 1990s they switched to technique and tactics.

To get into football Hogwarts, you’ll need a time-turner. The school was closed in 1999, and today weddings are held here.

The football academy lasted 15 years. It was closed due to a rule adopted in 1997: then Howard Wilkinson became the technical director of the Football Association, who advocated the unification of the player training system. Clubs were to be responsible for youth football, so the school at Lilleshel Hall had to be closed.

The academy worked for two more years. 234 players have passed through it, and some believe that not in vain. The same Michael Owen said that Lilleshel Hall made a man out of him. Today, a training center, opened in 1951, still operates on the basis of the mansion. But cricket and fencing are now forced to coexist with wedding ceremonies. If in the 1990s Lilleshel Hall turned boys into men, today it is a conveyor belt for turning unmarried couples into married ones. The minimum package is £70 per person. The price includes a welcome glass of prosecco, a celebratory breakfast, a photo op, a sleepover for the newlyweds, a red carpet, and even a cake stand with a knife. The minimum number of guests is 50 people. In December it was possible to celebrate Christmas in the castle. Dinner and meeting with Santa in oak interiors cost £22.50. But today nothing reminds of the fact that once future football stars lived in Lilleshel Hall. Once there was a sign with the names of 12 England players who studied at the academy at different times, but for some reason it was removed a few years ago.