“I see this for the first time.” Fans are shocked by the video in which Messi was filmed with a barbell

If Pep Guardiola is to be believed, the next major tactical step will be for 11 players, including the goalkeeper, to try to dominate the midfield. However, while putting down an opponent is certainly attractive, winning a football match starts with defense.

In this article, you will learn how the position of cornerback has changed and what awaits us in the future.

From workhorses to playmakers

A lot has changed in football in the last 20-30 years, here are the thoughts of Jurgen Klop : “For a significant part of my career I played full back. My functions were radically different from what is required today. It is still important to defend well, but the attacking objectives have changed. Many teams now leave their flanks open when defending. If a defender is brave enough and has the right technical ability to find players in the penalty box in his team shirts, then he will be damn useful. ”

Let’s try to figure out how the role and functionality of the cornerback actually changed. I tried to divide this evolution into several stages.

The appearance of super laterals. Cafu and Roberto Carlos effect

Transformation of the full-back position began with the Brazilian laterals. The term “lateral” itself comes from the early sixties, the main difference from traditional defenders is the huge working areas.

Cafu and Roberto Carlos have redefined cornerbacks. These two tirelessly connected to the attack and closed the entire edge of the Brazilian national team. The national team played according to the 4-2-2-2 scheme: two of the four players of the attack group went to the middle, opening the edges to the laterals.

Michael Owen: “I played against Brazil a few times. Cafu and Roberto Carlos were amazing, they changed the way defenders played. People thought full-backs were only supposed to defend, but today it’s important that they also have good ball control.”

Here is what Roberto Carlos himself said : “Modern Brazilian defenders use my style of play and Cafu’s style of play. Brazil has always had a back four. Thus, if one flank attacked, the other defended. Such movements (one forward, the other back). Cafu and I enjoyed the fact that we were covered by defensive midfielders in the center and two central defenders behind. We modified these small details a little in terms of defense and were well organized in the moments of connections. So when either I or Kafu went forward, the other players were alert and ready to back up.” 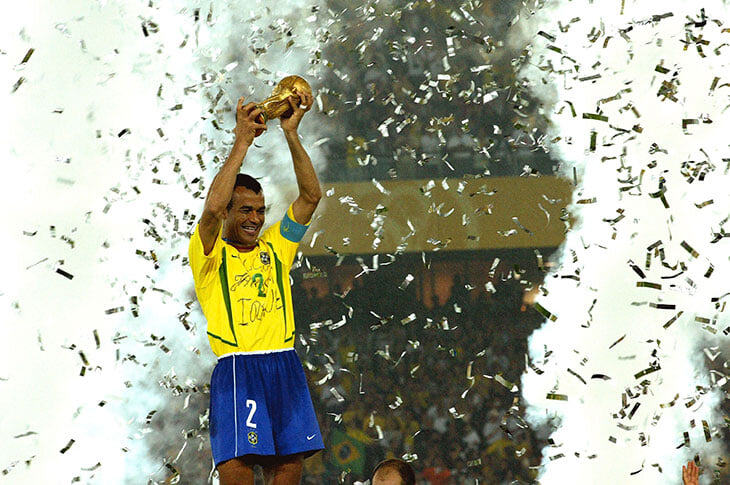 Cafu’s success is largely due to the legendary Brazilian revolutionary coach Tele Santana, who not only bet on bright attacking football, but also turned the young flank midfielder into a full-back. The injury to the main right-back Ze Teodoro forced Santana to look for new moves and reveal Cafu’s talent to the world.

“At first I didn’t really like the new position, I had to learn how to serve into the penalty area in a different way, it took time. But when they started calling me to the Brazilian national team (1990), everything paid off: Santana was completely right, ”Cafu recalled.