Avatar: The Path of Water has a simple plot of genre clichés

The first Avatar came out 13 years ago. Now I only remember that it was the first movie with full 3D and breakthrough computer graphics. Since then, such a leap in technology has not happened – which means that the sequel should take not only a beautiful picture, but also everything else: characters, plot, dramaturgy.

Cameron has clearly been tormenting sequel scripts (now Avatar is a five-film series) for several years for a reason. In the original Avatar, the only thing I cared about was the character Sigourney Weaver, and that was because Weaver played her. In The Way of Water, the CGI characters evoke much more emotion.

Jake Sully (Sam Worthington), reborn as a Na’vi hybrid, has a large family with his beloved Neytiri (Zoe Saldana). Now they have three children of their own: the eldest son Neteyam, the middle Lo’ak, and the youngest Tuk. In addition to them is the adopted teenage daughter Kiri (Sigourney Weaver), miraculously born from the comatose body of the Na’vi heroine Weaver. The family also has close ties to Spider (Jack Champion), the son of the first film’s antagonist Colonel Miles Quatrich. The military had to leave him on Pandora during the evacuation – because Spyder was still an infant who could not be placed in a cryo-sleep capsule. 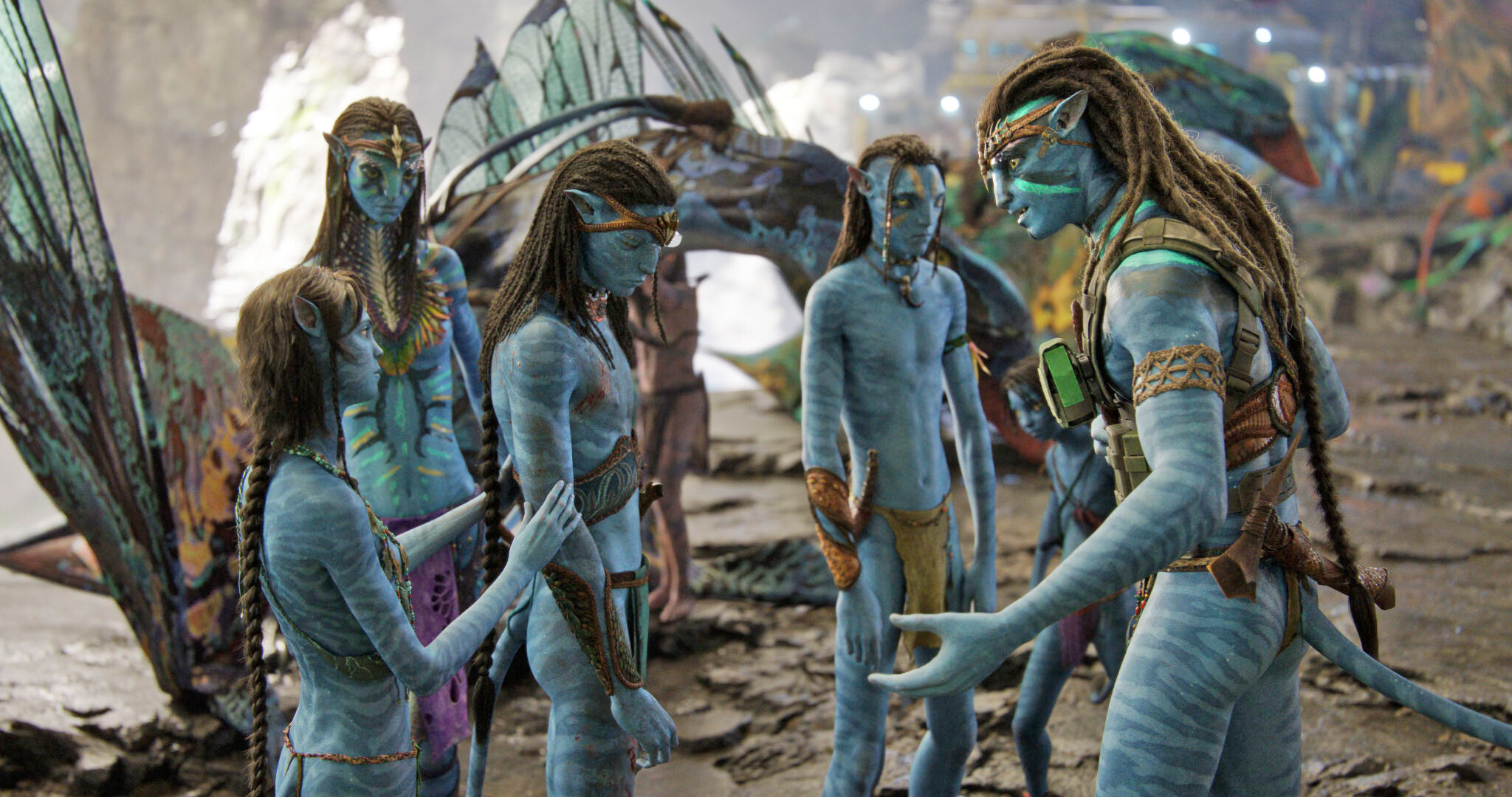 As you might guess, such a number of new characters of different ages and origins is a clear backlog for sequels. Each child has their own predictable role in the plot, they have only just begun to be revealed in The Way of Water. And, of course, a significant part of the 3-hour running time of the film goes precisely to the development of relationships between Sally’s family and other characters, as well as within herself.

At the same time, the plot outline specifically for the “Way of Water” is quite simple: after about 15-16 peaceful years, people returned to Pandora again – all the same evil, but now also much more prepared. The Earth fleet immediately begins building the city as a base, and the marines are sent to exterminate the locals – among them the number one target, of course, is Jake Sully, who betrayed the people.

The protagonist, together with his family, flees from an unexpected war – and emigrates from his native tribe of the Forest Na’vi to the village of the Water Na’vi. The latter differ in skin tone, they have more massive tails and arms – to better swim. In a word,the world of Pandora in the sequel seems no longer just a beautiful amusement park, but a full-fledged big planet.

The film could have been cut to 30 minutes, but that would have broken it.

“Avatar: The Way of Water” is a monstrously long movie lasting as much as 3 hours and 12 minutes. At the same time, at first glance, James Cameron seems to be simply mocking the bladders of the audience, becauseon paper, there is nothing in The Way of Water that could not be told in an hour and a half or even in the format of a 30-minute cartoon.

At the beginning of the session, one really wants to become an enthusiastic editor and argue: this scene can be shortened by a factor of three, these episodes should generally be cut out entirely, and so on. Only in the second half of the film do you realize that the general slowness and permissiveness of the film is exactly what gives the story the necessary weight and humanity. It is very important to spend as much time as possible with each member of the Sally family, get to know the children, enjoy the views and life on Pandora. Even though The Way of the Water seems in places to be purely Cameronian narcissism: look what I can, no one can do that, no one would spend so much money animating so many CGI fish! 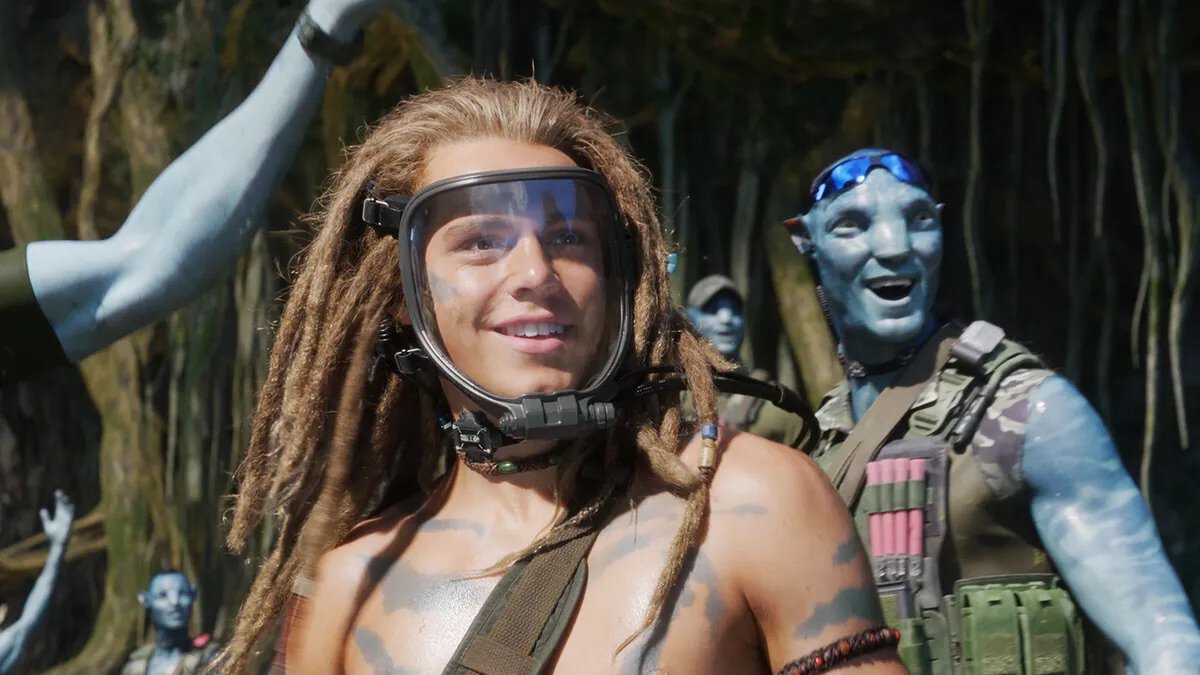 Simple and told a thousand times before, the plot of “Avatar 2” works precisely due to the fact that the viewer is sure to be imbued with love for Pandora and everything that inhabits it. There is no other way: you are connected and two hours show with what love and attention to detail this fictional world was created. Apparently, empathy can be awakened by brute force and diligence – an amazing thing.

And then, when you have already forgotten about the unreality of what is happening – including because of the phenomenal graphics, like 13 years ago, but cooler – your heart will be torn out of your chest. The third act will come, in which the main storyline finally develops. It begins a full-scale armed conflict – both global and very personal for the characters. And this time you share the emotions of Neytiri, who mourned the burning forests in the first minutes of the film. Now you’re in pain too. 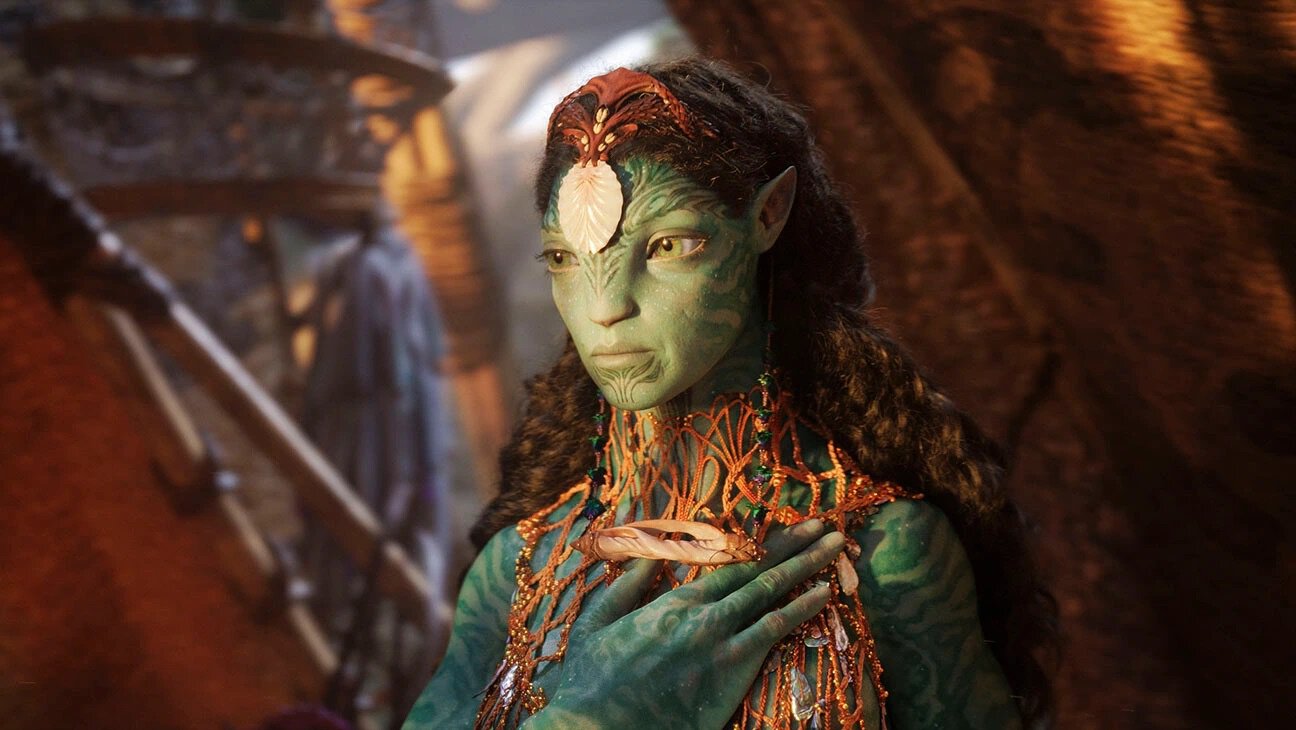 I am not exaggerating: at the end of Avatar: The Way of Water, I felt so uncomfortable and nauseous, as if I had just watched a war drama or even a documentary about some kind of serial killer. This is because modern family films, as a rule, are extremely positive and optimistic, in them good triumphs over evil, and positive heroes die very rarely and beautifully.The Way of the Water littered me with corpses, both human and Na’vi, and in one scene even threw a severed human arm in my face.. Scary.

Even worse, the human cruelty and bloodlust in the film is not something isolated in one or two villains who can be victoriously beaten in the final act and go into the sunset. Here is much more realistic aggression, which rapidly poisons and captures everything around. And it looks equally ugly both in the case of antagonists and based on heroes who are ready to commit terrible acts out of desperation and impotence.

Particularly indicative in this sense is the secondary line of friendship between one of the heroes and a giant fish (don’t ask). We learn that these fish are incredibly smart, much smarter than any human or Na’vi. And they never hit back – probably just because they are above it. That’s just because of the attack of people, one of these fish – what would you think – goes against its nature and also begins to kill.

All in all, Avatar: The Way of Water is an amazing movie. Amazing beauty picture. It’s amazing how much you can show and tell within the framework of the family age rating. And, finally, surprising in that James wrote the script for the film long before 2022.