But he himself left the arena on the anthem of Canada.

On Saturday, Avtomobilist captain Sergey Shirokov unexpectedly spoke during the break of the away match with Barys: “From childhood, they teach that you need to get up when the national anthem is played. Many people were sitting today when the Russian anthem was played. I think this is unacceptable.”

It’s funny, but Shirokov himself already had an episode related to the anthem in his career. In 2015, the Russian team in full force left after losing the World Cup final (1:6) – the players did not stay on the ice and missed the Canadian anthem. Shirokov was part of that team.

All about the tradition of standing during the anthem: how it manifests itself in Russia, what in other countries, what kind of punishment

It is believed that listening to the anthem while standing is a sign of respect for state symbols and a manifestation of patriotism. Until the 17th century, the anthem in Russia was replaced by church hymns – and the rules of conduct appeared just at that time. Some of them: you need to listen while standing, you can sing the words from it or just be silent. The wording of the rules is similar for all countries and applies to each anthem.

For Russia, the behavior of people during its execution is  regulated  by the Federal Constitutional Law of December 25, 2000. Article 7 states that those present listen to the anthem while standing, and the men at this moment take off their hats. If the national flag of the Russian Federation is immediately raised, then people will definitely turn to face it. 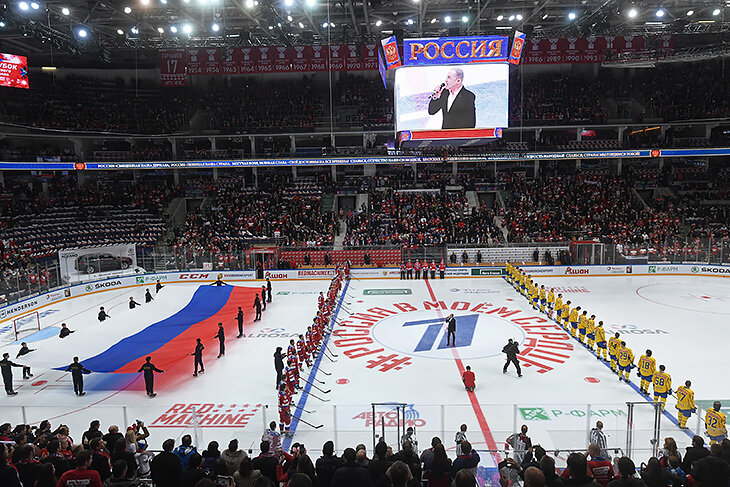 Officially, liability is now still provided only for desecration of the coat of arms and flag. The maximum penalty is imprisonment for up to one year. The Administrative Code of the Russian Federation also prescribes an anthem next to them; punishment – only a fine of two to three thousand rubles. In Russia, real proceedings with those sitting during the anthem do not reach, although scandals still happen. In 2018, the mayor of Dimitrovgrad (Ulyanovsk region) quarreled with a journalist and hit him – he was sitting at the moment when the anthem was playing.

The rule of standing during the national anthem carries over to sports. Teams from Russia, Kazakhstan, Belarus and China play in the KHL. The league regulations  spell out the rules of conduct for hockey players and officials – they must comply with the rules of conduct and respect for the symbols of the state. The technical regulations contain the same clause for fans at the stadium. It concerns not only the anthem of one’s own country – respect must be shown to the anthems of individual Republics and foreign states. Everything works both ways.

In Belarus, according to the principle of Russia , it is customary to stand up as a sign of respect. In the same Kazakhstan, the norms of behavior are a little tougher: those present at the performance of the anthem also put their right hand on their hearts. In China, one must stand “calmly and solemnly.” In 2017, the session of the Standing Committee of the National People’s Congress voted in favor of amendments to the law. Disrespect for the anthem – up to three years.

Traditional norms everywhere urge people to stand up when the main state melody is played. In many sports leagues (for example, in the NBA), this is officially enshrined in the regulations. In different countries there are unique things related to the anthem. In India, even cinemagoers have had to listen to him standing up since 2016. Later, the very performance of the anthem in the cinema there became optional.

In America, there is a popular form of protest against national symbols – people kneel during the performance. She appeared there in 2016. It all started with the NFL player who brought so much attention to racism and police brutality. Later, the Black Lives Matter event arose in honor of Colin Copernicus. It was his performance against the anthem in the NFL was the first. 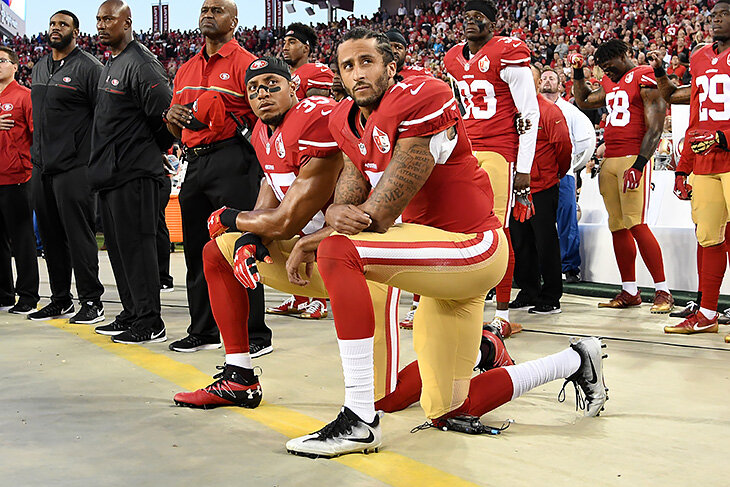 Because of the case with Copernicus, everyone is now even more attentive to the behavior of the fans. After him, at NFL games, even the announcer asked the fans to stand up for the anthem, and the league scared the teams with fines if the protests of the players continued. The Washington Post wrote that 53% of Americans consider such actions inappropriate. But for 42% they look adequate.

Hockey anthem scandals: Ak Bars fans screamed, and the captain of Canada did not take off his helmet

The Russian Ice Hockey Federation received a $85,000 fine for leaving before the Canadian anthem at the 2015 World Cup. It turned out that the captain of the national team Ilya Kovalchuk eventually became the initiator of such an action. Sports officials from Russia apologized to Canada for the behavior of the players – without this, the fine would have been even more serious. The IIHF considered that situation a violation of the rules.

The Russian national team in 2015 was divided into two groups. Most hockey players left immediately, but some did not leave until the last. Dmitry Kulikov drew attention to this : “Naturally, when most of the guys left the ice, everyone else left. Personally, I was in a group that did not want to leave, because I thought that after the Canadian anthem, the Russian one would also sound. 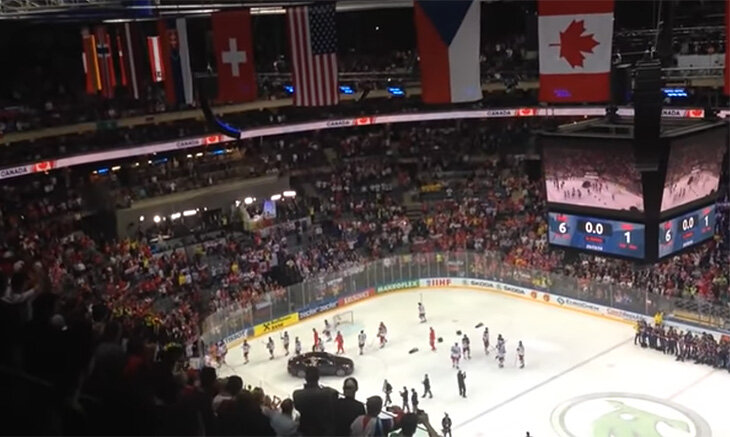 The Canadian response came a few years later, but at a youth level. Maple captain Barret Hayton did not take off his helmet when the Russian anthem was played at the stadium – because of this, the hockey players of the national team did not shake hands with Hayton after the game, but he did not argue and publicly apologized. He explained everything with a banal mistake: he just thought.

In the NHL, each club’s fans have their own rules of conduct. For example, Chicago fans usually greet the performance of the anthem with loud applause. Everything went from a series with Edmonton in 1985. Blackhawks fans themselves call their own arena the loudest in the world when the state tune is played on it.

Fans of some teams change the lines of the anthem to the mention of the name of the club – this happens in Russia (for example, “Glory to Siberia, we are proud of you” in Novosibirsk instead of the original version). Fans in the stands stand up at every stadium, but sometimes scandals still occur. In the spring of 2021, Ak Bars fans charged chants before the anthem of Bashkortostan. For the next game, they got into the arena bowl only after its completion. The club then received a fine due to the behavior of its own fans – 100 thousand rubles.