An enchanting denouement at the Russian Figure Skating Championships: for the first time in history, two leaders scored the same amount – 295.07 .

But Evgeny Semenenko with gold, and Petr Gumennik in second place. Why? Due to the best result in the free program (more details below).

Semenenko skated penultimately, with a firm fight on jumps. Goose – as a leader after a short one – closed the competition and made blots: touching the ice with his hand, double jumps. 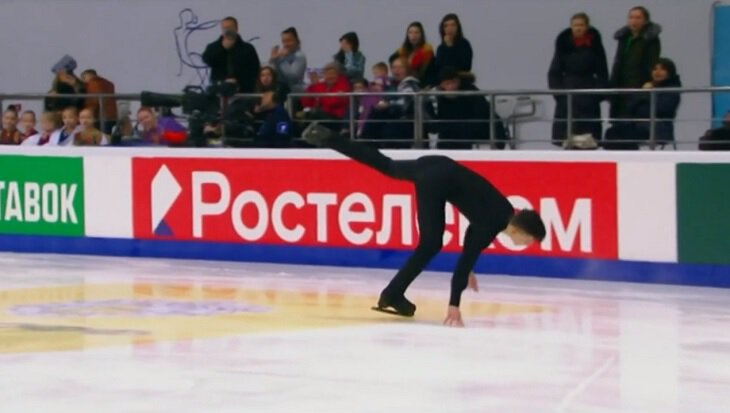 One extra turn on any or a clean quadruple salchow is a sure victory, but no.

Waiting for Gumennik in KiK and Semenenko (with ashy hair) a few meters from him on the leader’s bench is the decoration not only of the championship, but of the whole season. 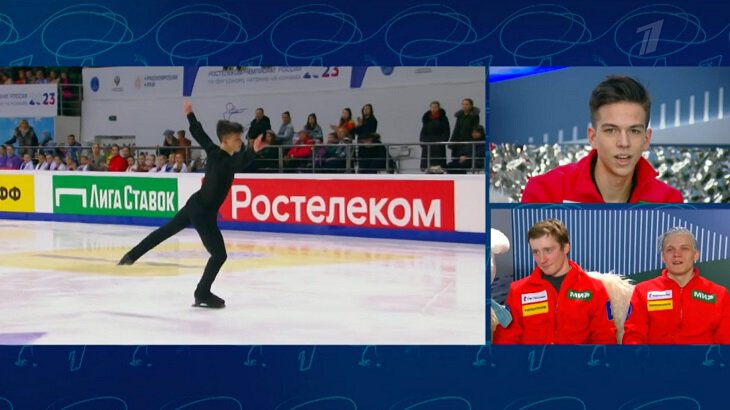 Alexander Samarin (on the left) understood perfectly well: bronze is coming to him – he is the calmest in these shots. 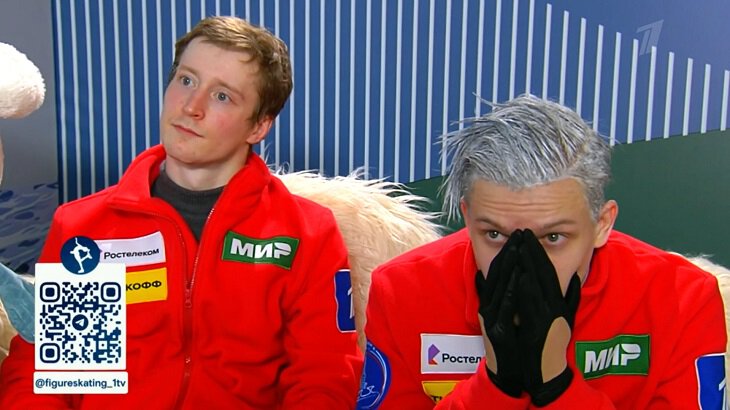 Semenenko’s headquarters saw a lot and patiently waited – Alexei Mishin even seemed to be grinning. 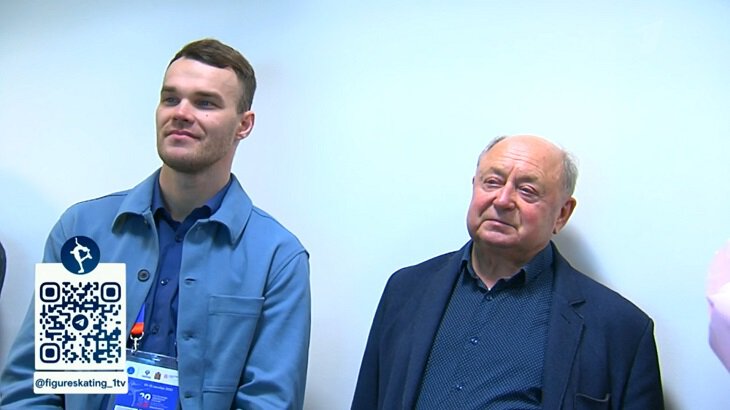 Veronika Daineko, who impressed with her emotions the day before , also tried to control herself. 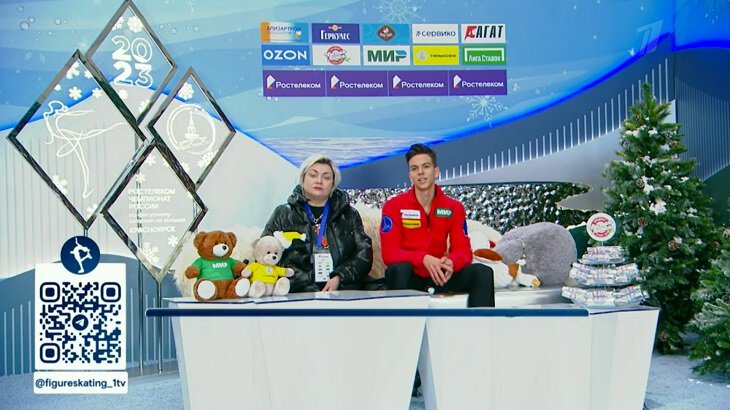 But when I saw the ratings, it caught fire. 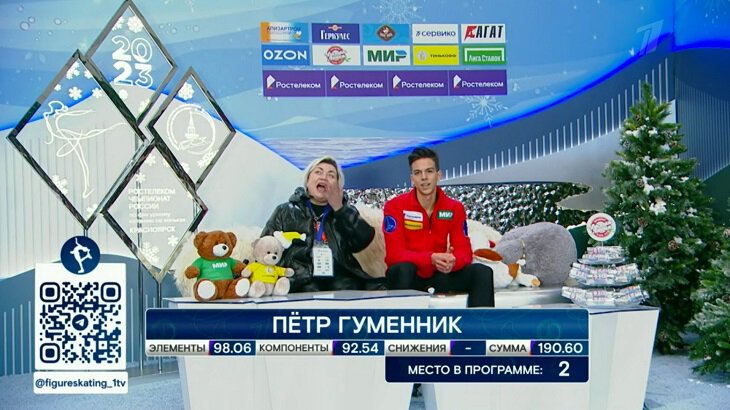 The goose quickly counted in his mind. 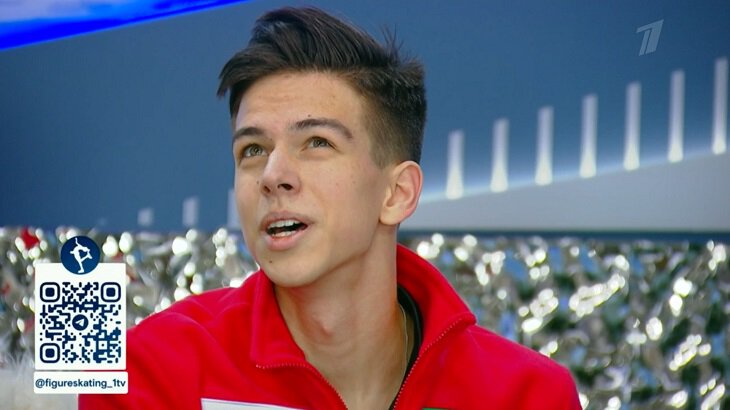 But the computer did it before. 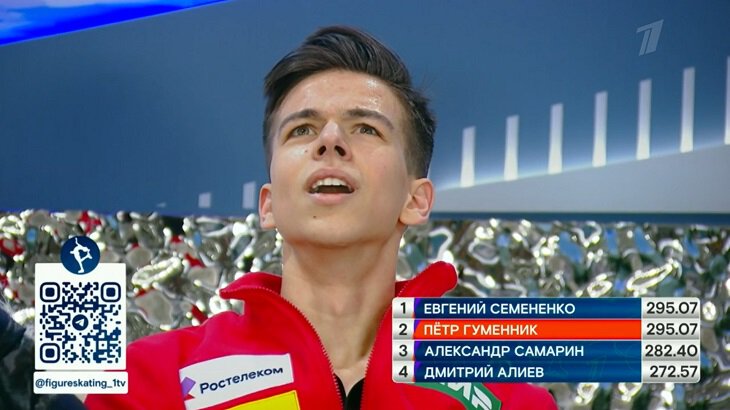 And now the focus is on Semenenko. 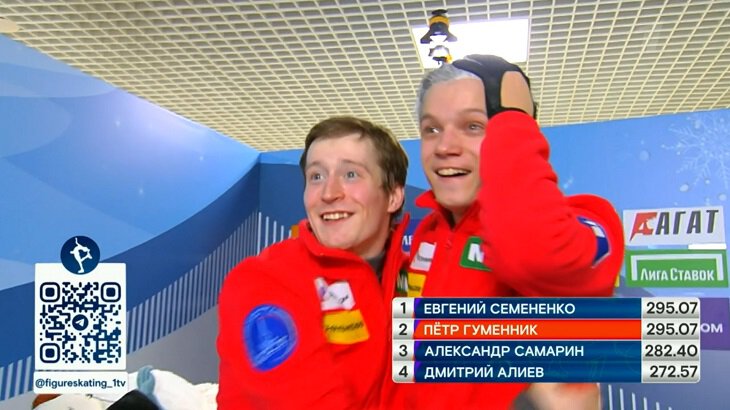 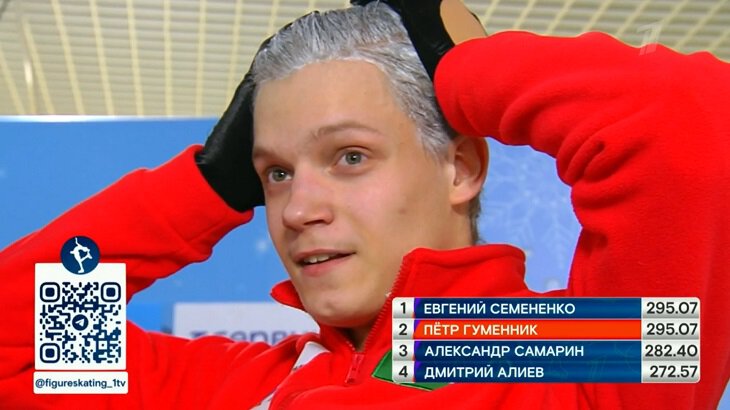 But two gold medals, as at the 2002 Olympics , are not awarded – the regulations even provided for such fantastic situations. Here is what is said in paragraph 17.5 of the rules of our federation :

“In cases of obtaining equal final results in points, the participant / couple / dance duet / team with the highest result in points in the free program receives first place, etc. If the highest scores are equal, the athlete with the higher placement will be the best.”

Semenenko has 195.92 points in the free program; Gumennik, who made a mistake, scored 190.60 and lost a decent lead after a short one.

The judges hit the 100th in the 100th, and this made Semenenko the winner. How did you manage? There are no unsolvable tasks for our figure juries.

There were only two people left for the traditional championship interview for Maxim Trankov: no one dared to ignore Gumennik , who would formally be superfluous here. And he honorably accepted defeat:

“I knew I had to skate clean. And when I twitched a little on the quad salchow, staggered, I realized that now there would be a jump, I don’t understand how I would land, I couldn’t even imagine. At that moment, I realized that I had lost all my reserve in points and that I could not have a single mistake anymore.

For some reason, at first I saw that I scored 190.8, and decided that I was the first. Then I saw that it was 190.6, and then I began to have doubts. First, after all, they show for an arbitrary, only then the amount. And I thought: what am I – the first or the second? Well, so that the scores coincide like that … This is generally unexpected, unrealistic. It’s probably hard to call such a rental a championship, so the fact that I’m second is fine with me. ”.

Semenenko also did not hide the shock:

“It was powerful. Already after the completion of all the jumping elements, he entered completely into courage. Did you think to catch up with Goose? There are always chances, there is already how fate decides. Of course, it’s very nice when all the coaches are behind the board, they worry. I think they were even more worried than I myself.

For Yevgeny, this is the first medal of the national championship – on the third attempt, immediately gold. Two years ago he finished 11th, last December he dramatically lost bronze to Mozalev (but still went to the Olympics due to Kolyada’s illness).

Now the joker of Alexei Mishin is at the top (albeit not in absolute loneliness). 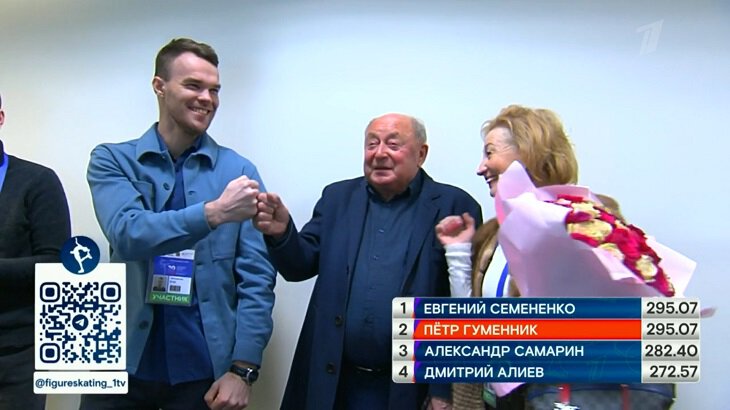