Skip to content
Hong Kong (CNN)The Chinese metropolis of Chongqing has rolled out mass Covid testing in its central area amid a record heat wave, leaving millions of residents standing under the sun for hours as they struggle with extreme temperatures and power shortages.
Stringent zero-Covid measures enacted by the southwestern mega city to contain an emerging outbreak are the latest hardship for residents already reeling from a crippling heat wave, a severe drought and blazing wildfires.
Chongqing reported 40 Covid-19 infections Wednesday, bringing the total to 146 cases since mid-August.
https://c.mi.com/thread-4142264-1-1.html
Authorities ordered more than 10 million people in the city’s central urban districts to undergo mandatory Covid tests on Wednesday, when the highest temperature in Chongqing soared past 40 degrees Celsius (104 degrees Fahrenheit).
More than 3,800 temporary testing sites were set up across the central districts. Photos on Chinese social media show residents forming long lines at the sites, with some passing out in the intense heat.
One widely circulated video shows a street packed with hundreds of people apparently waiting in line for Covid tests, most wearing face masks and some fanning themselves to relieve the heat. In the background, plumes of smoke from wildfires rise above the pale-orange skyline.

Residents appear to line up for mandatory Covid testing in Chongqing, as plumes of smoke from wildfires rise in the background.
“It’s 43 degrees, the people of Chongqing are already stretched to the limit,” a resident said on Weibo, China’s Twitter-like platform.
To ensure residents in the central districts comply with the testing mandate, authorities turned the health codes on everyone’s mobile phones to orange. The codes will turn green only after they complete the Covid tests.
A green code is a prerequisite for going about daily life in China, where freedom of movement is dictated by a color-code system imposed by the government to control the spread of the virus.
Residents who have not been tested will not be allowed to attend gatherings, meetings or business activities, nor can they enter crowded, enclosed public spaces, according to authorities.
Chongqing resident Zeng Meng, 42, said a message on his health code app told him to take a Covid test around midnight on Wednesday.
“Forcing more than 10 million people to do Covid tests in such high temperatures is deplorable,” he said. “This is neither scientific, reasonable, nor legal.”
Zeng said people started lining up for tests at his residential compound in the small hours of Wednesday, but he refused to take one. On Thursday, he was barred from entering a supermarket because of an orange code on his health app, he said.
“Excessive anti-Covid measures have caused us great inconvenience. Many of my friends resent being forced to do Covid tests,” he said.

The testing came as thousands of emergency responders were battling to contain fast-spreading wildfires, which have swept forests and mountains around the city in recent days. The blazes are visible at night from parts of the downtown area.
On social media, residents in downtown Chongqing complained of smelling smoke inside their apartments, while others posted pictures of burning embers from the fires reaching their balconies.
Since August 18, wildfires have broken out in multiple outlying districts, local authorities said. The municipality is home to more than 32 million people. 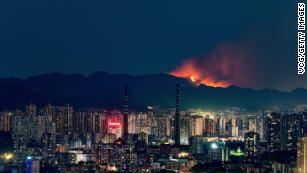 Wildfires rage as China’s Chongqing suffers unrelenting record heat wave
The wildfires are another knock-on effect of a crippling heat wave — China’s worst since 1961 — that has swept through southwestern, central and eastern parts of the country in recent weeks, with temperatures crossing 40 degrees Celsius in more than 100 cities.
China’s heat wave has also brought surging demand for air-conditioning and reductions in hydropower capacity due to droughts that have hit the country’s commercially critical Yangtze River and connected waterways.
This week, Sichuan province, neighboring Chongqing, extended temporary power outages at factories in 19 of the region’s 21 cities. The power cuts will run until at least Thursday, in a move the local government said will ensure residential power supplies. Last week, the province’s capital Chengdu began dimming lights in subway stations to save electricity. 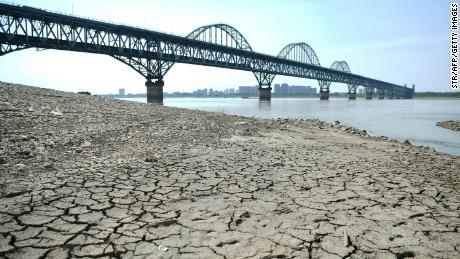 Giant ice cubes? China residents use extreme measures to cool from heat 03:40
The power crunch has dealt a devastating blow to farmers, who have seen crops and livestock wither and die in scorched fields and sweltering sheds.
On Douyin, the Chinese version of TikTok, the owner of a chicken farm in Sichuan posted a video that shows piles of dead poultry lying on the ground.
“I watch them die,” the owner said through tears. “The temperature was so high yesterday, yet they cut off the power.”
On Tuesday, Chinese authorities including the Ministry of Agriculture and Rural Affairs and Meteorological Administration jointly issued an emergency notice, requiring local authorities to reduce the impact of drought and high temperatures on the country’s autumn grain production.
Local authorities were told to “release early warning information, expand drought-resistant water sources, and guide the development of cloud seeding.”
The Meteorological Administration said Tuesday it had dispatched a high-performance aircraft to Chongqing to help conduct cloud seeding, according to state-run CCTV.
Weather authorities in Chongqing said the aircraft would coordinate with 107 anti-aircraft guns and 96 rockets on the ground to accurately create precipitation, CCTV reported.