Now “8” in the counter of his goals for a long time.

The figure eight has long been an integral part of Ovechkin’s image. Since the 2004 Draft pick, he has kept that number on Washington’s jersey. In 2020, the NHL website recognized Alexander as the best player in the history of the number eight players. “Great 8” – “Great Eight” – one of Ovechkin’s nicknames that fans have chosen for him.

In general, he has been with the figure for so long that not even everyone knows where it came from. 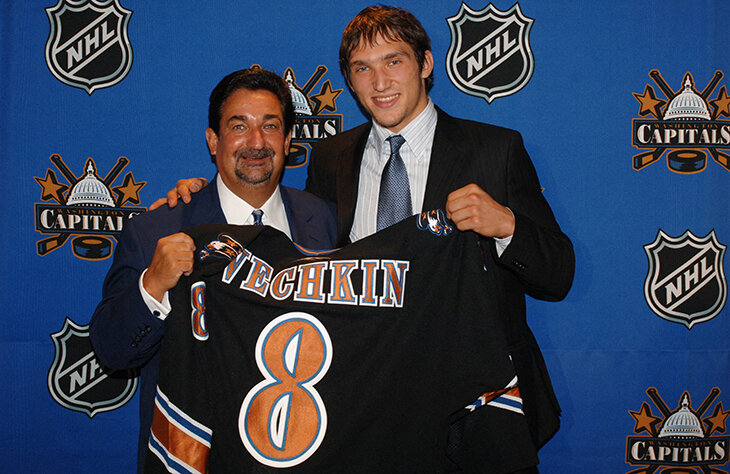 Tatyana Ovechkina is the most influential person in Alexander’s career . He constantly imitated his parents in everything, therefore, because of his mother, he chose a game number in the NHL.

She played for the Dynamo basketball team and the USSR national team, twice took Olympic gold under the eight. But her choice was not accidental either – she admired basketball player Vladimir Tsinman from childhood, which is why she asked for the same number for herself. “Since then, the figure eight has always been with me: from the children’s school to the Olympic team,” she told Soviet Sport.

The Ovechkin family calls it a corporate number – and at the same time makes a reference to the fact that Alexander started playing hockey at the age of eight, when his older brother took him to training. Eight accompanies the player in everyday life. In 2017, they had a bright wedding ceremony with Anastasia Shubskaya. Date is July 8th. The engagement was held earlier, but the event was tied to the Day of Family, Love and Fidelity. Even more interesting is that Ovechkin and Shubskaya met in August 2008, and their first child was born on August 18, 2018.

In Washington, the eight became Ovechkin’s signature symbol. The New York Times reported  on the action when he signed Styrofoam eights for children. The “Great Eight” publicly calls him  Jaromir Jagr. The eight is inscribed in a link to Ovechkin’s twitter, where he sometimes throws in references to his own number. Once he showed a meeting with Tretyak at the presentation of the Olympic uniform: “8 stars on the shoulders. My number is also 8.

In 2021, Ovechkin released an NFT collection. Its release date is August 8th.

What the eight brought to Ovechkin: fan love, advertising contracts, recognition in the NHL 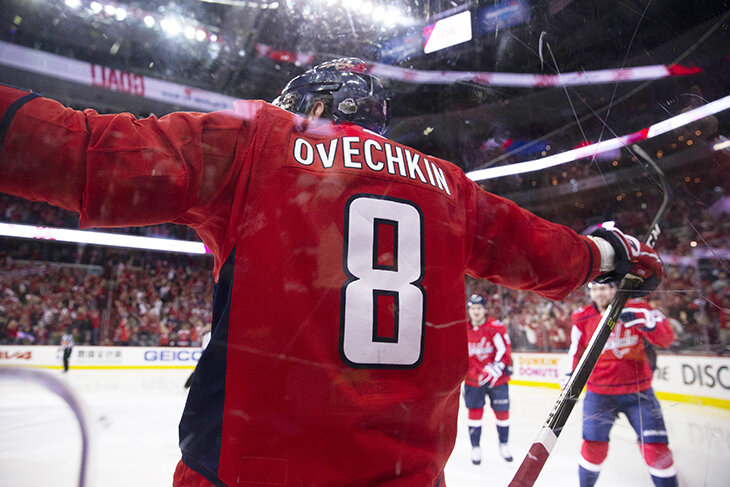 Several hockey players immediately scored votes in the poll for the best NHL player with the eighth number: Selanne, Neely, Doughty, Larionov, Rekki. Ovechkin easily outstripped them all with a total of 53 points. Ten years earlier, the league made a 60-minute documentary about his career. English title – Alex Ovechkin: The Gr8. Even then, everyone finally considered his greatness.

His association with the eight was especially pronounced against the background of other NHL stars. In 2009, defenseman Mike Komisarek was forced to cede number eight to Ovechkin in the NHL All-Star Game. Instead, Komisarek took the 44th there: “Maybe he will treat me to a beer or invite me to dinner somewhere.”

The figure eight is also the basis for advertising contracts. Hublot did a promotion with Ovechkin and presented a special watch: in red style, the eight is highlighted separately. In total, 100 copies of such watches were produced. They can still be ordered for about 2 million rubles. 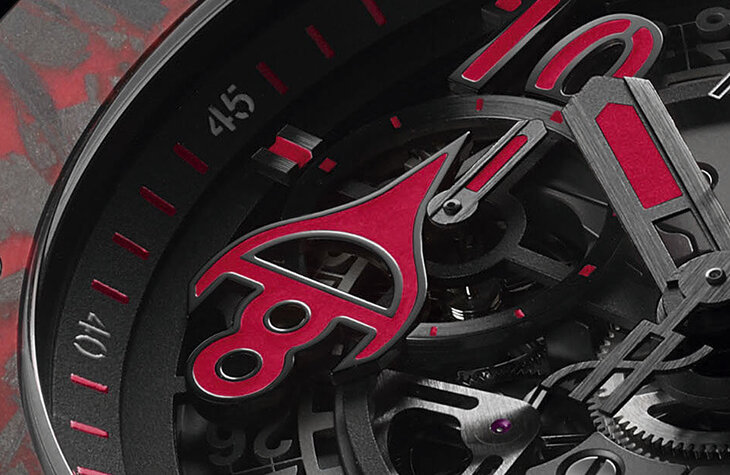 Fans’ actions are also connected with Ovechkin’s number. A fan came to the match with a sign saying “Ovi, you are number 8, I am number 26. 2+6=8. We are both great! Alexander appreciated and after the match with Calgary gave him a stick. Although, of course, the fan who made the eight out of his beard is much more famous: In 2019, Ovechkin was the NHL Ambassador to China. In Chinese, his name was written with three characters. One of them meant eight – with a reference to the number.

Alexander inspires others with himself. Michael Carcone (one season in the NHL) went pro with an eight out of love for the legend. Hockey player Iya Gavrilova copied the manner of playing and celebrating Ovechkin – and naturally played for the national team under the same number. But the Dynamo forward Skorenov took number 32 in Belarus – with a reference to another number in Ovi’s career.

• 3 – in the football Dynamo. Alexander chose this number because of his father. He himself played football and went out for Dynamo under the third number. Ovechkin played football for the blue and whites in only one match – in the summer the club played a friendly game with Amkal – and it was under the troika. Alexander made his debut successfully – he scored a goal for Fedor Maslov. 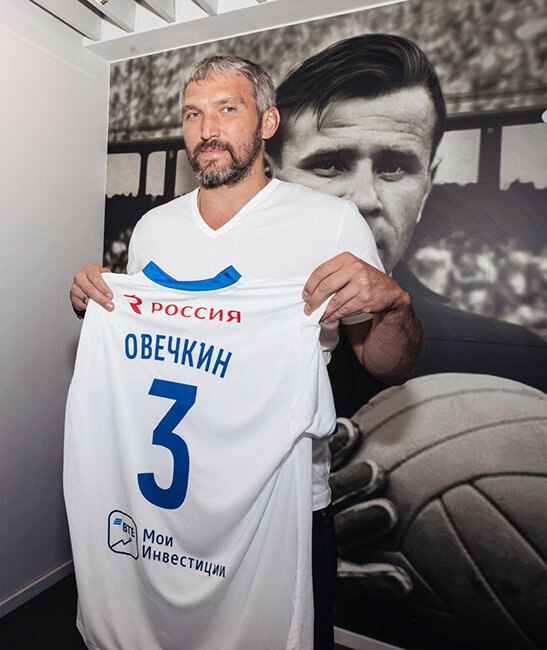 • 24 – in memory of Kobe Bryant, who crashed in a helicopter in January 2020. Ovechkin came out to warm up before the game with Nashville in the form with the 24th number. Then this form went to auction, and all the money went to the Bryant family foundation. The hockey player himself has always admired Kobe. In 2016, they met at an NBA game, and Bryant then gave him sneakers and a signed jersey. 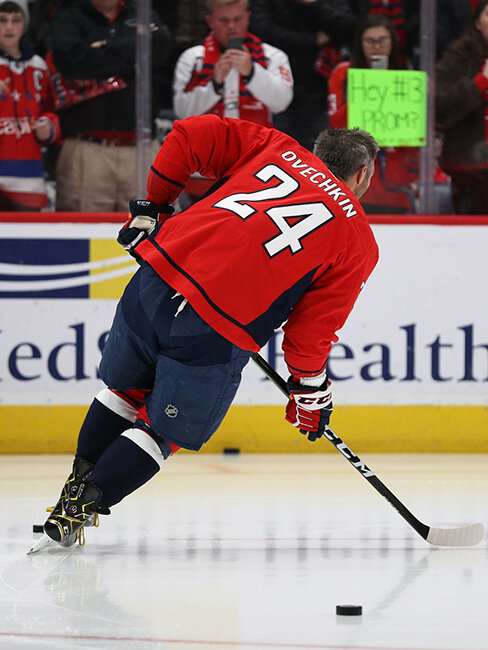 • 32 – started at Dynamo. Before leaving for the NHL, he played for the blue and white in the Super League under this number. At the time of the lockout, the striker returned to the KHL – and again took the 32nd. Defender Barantsev then played under the eight , but Ovi did not take the number from his partner. In an interview with RTVI , he admitted that he was ready to end his career at Dynamo – and it seems clear under what number. 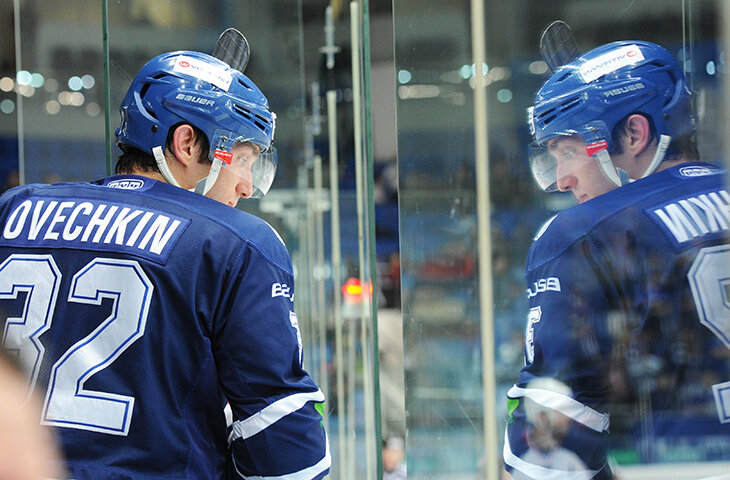 • 69 is the number on his bag. The story recently aired for viewers in Russia, but Ovechkin has been using a bag with that number for a long time. Details were revealed back in 2017: once his uniform was stolen from him at the airport. Therefore, the attacker decided to disguise his own equipment in this way. The 69th number itself in the entire history of the NHL was generally taken by only two players.