No matter how cynical it may sound, but the children of NBA stars are also a kind of tool to attract an audience. Even people who are far from basketball find it difficult to resist the charm and spontaneity of cute baby dolls defiling through the locker rooms of teams and accompanying their parents at press conferences.

In addition, in this area, if desired, you can also dig out a competitive element. Lovely photos on social networks and constant being in public form not only the image of good parents among NBA players, but also create a considerable fan base among the children themselves.

For example, for a long time no one could compete with Riley Curry, who has several fan accounts at once on the most toxic of all social networks. But last May, she had a serious competitor in the chubby face of her son Jason Tatum. Jason Tatum Jr., or simply “Deuce”, had often been in the sights of television cameras before, but he became truly famous thanks to one amusing meme. 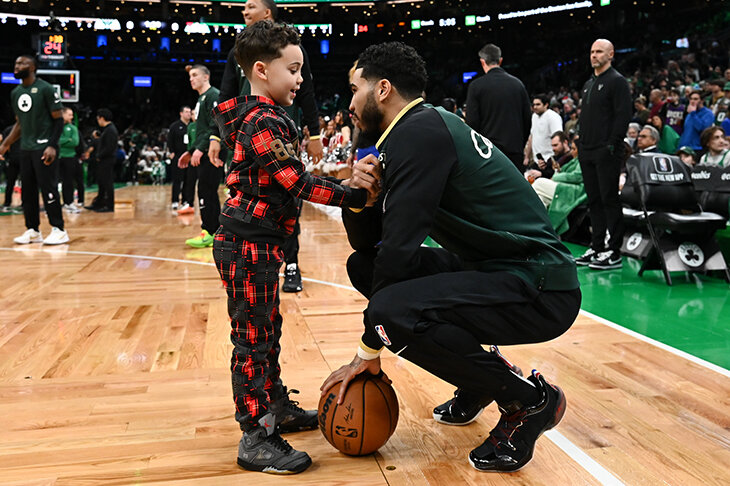 The Celts lost the first match 107-118, and as a bonus, they received scathing comments from Jimmy Butler, who scored 41 points.

“All we needed was to play easier. We already know how to take advantage of their mistakes. They constantly provide us with opportunities,” summed up the victory of the Butler team.

The press picked up the fiery speech of the leader of the “Hit”. For example, Skip Bayles, master of artistic sketching and fantasy prediction dock, reacted instantly to the result of the first match of the series.

“If you take out Steph Curry and Luka Doncic, then Jimmy Butler is the best player left in the playoffs,” the showman concluded on the air of the Undisputed program.

At the same time, the guru did not take into account that the Celtics played the match without two starting players: without Marcus Smart and Al Horford, who pulled themselves up to the second meeting.

And here the Celtics have already confounded the unfortunate forecasters. “Boston” instantly extinguished “Miami” – 127:102, Marcus Smart lacked one rebound for a triple-double (24 points, 9 rebounds, 12 assists), Horford converted 100% of the shots (10 points, 4 out of 4, 2 out of 2 three-pointers) and Jason Tatum was the top scorer with 27 points.

The media instantly changed their shoes and began to praise the audacity of Boston and cherish Tatum. But neither the numerous compliments nor the detailed analytics could compete with the funny photo of Deuce Tatum with the caption “My dad is better than you,” clearly addressed to Jimmy Butler.

The meme originated on Twitter on the NBA Memes page and instantly spread across the Internet. Soon, Deuce’s photo became a universal symbol of superiority: it was addressed to each other by NFL players, musicians and ordinary people who wanted to tease their interlocutors, but do it as cutely and without mockery as possible. Naturally, the popularity of the meme caused increased attention to the person of Deuce himself.

Deuce was born in the year when Tatum got into the NBA, and the player himself constantly draws parallels between himself and his son

2017 was a turning point in the life of Jason Tatum. In June, the Celtics selected him third in the NBA draft, and six months later he became a father.

“A new chapter began in my life, and I was a little confused. For such cases, there is no special guide, and there is no exact guide on how to become a good parent. So my concern was natural. I think that for me and my son this is an opportunity to walk this path together. 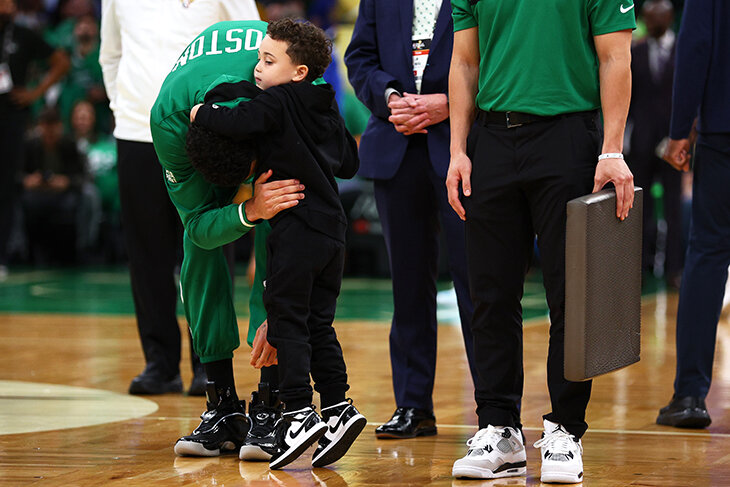 We are both growing up: I am learning to be a professional in my field and an attentive father, he discovers something new every day. Me and him – we share important life moments. He understands what is important to me, and I get used to adulthood myself and help him do the same. This relationship makes us better. This is the best feeling in the world,” he said about his relationship with his son Tatum.

In addition to family ties, Tatum admits that he is very dependent on his son as a source of motivation.

“I want Deuce to remember me not only as a good father, but also as an athlete who always strived to win. His presence at matches is very important to me. This is not a pose, this is not said for laughs. Every time he comes to the game, he sees how I give all my best. I, in turn, remember that my son is looking at me and I have no right to screw up. I do everything in my power to win. I am concentrating on this and I am sure that if I continue in the same spirit, then big achievements will come sooner or later.”

Tatum’s son became the Celtics’ mascot: he sets up players in the locker room, stands next to his father during the anthem and participates in press conferences

Deuce is not just a relative of Tatum, but a full member of the team, with his own temper and habits.

“Deuce knows the game, I tell you. And he’s a guy with character,” Marcus Smart joked. – Once I threw the ball from behind the side, and he hit me from behind. To be honest, I was expecting him to do it. Every time he comes behind me, I expect him to attack. Deuce is a very wayward kid, but he’s our man. We all love him. So it’s all right.”

His words are confirmed by other Boston players.

“Oh, we have a relationship of two adults with him,” Grant Williams tells about his relationship with Tatum’s son. – There are days when he comes, hugs me, cheers me up, asks: “What happened?” And sometimes he looks at me, you know, with such a provocative look. Then he comes up, punches me several times and disappears. Then I start to think how I could hurt him. His behavior makes me wonder where I made a mistake – in a relationship with him or somewhere in the game.

Deuce is not a rare guest at his father’s press conferences. For example, after defeating Milwaukee in Game 7 of the second round of the playoffs, Tatum Jr. sat on his father’s lap and answered questions from the press. So Deuce told reporters that the first thing he intended to do when he arrived in Miami was to go swimming.

Giving five to Deuce when he inspects the Celtics locker room before games is considered a lucky sign for each of the players.

The offspring sets up the father in a special way. Last year, tiny Deuce stood next to Tatum during the anthem at almost every Boston home game. And don’t call it a freak. At the end of the 2021/2022 season, the Celtics won 28 wins in 41 home games.

Deuce’s hobbies serve as an inspiration for Jordan Brand designers, and the guy himself is already showing an interest in basketball

Love for his son finds expression in Teitum’s outfit. The son’s nickname flaunts on all the player’s sneakers.

“Deuce is my pride, and I am very grateful to the people of Boston for the way they treat him. Each time he is very warmly received, given attention. People treat him as a person, not just as a child. I am very impressed with this attitude. His name on my shoes is a kind of reminder that everything I do on the court is done in his name too. Deuce is part of me, and I’m part of the Celtics. And I’m happy that the fans and the team understand that.”

In December 2021, Tatum wore a custom Air Jordan 36 inspired by Deuce’s favorite book, Brown Bear, Brown Bear, What Do You See? The year before, Tatum had brought this and other children’s books to the Bubble so he could read them to Deuce on Face Time. Deuce, of course, did not remain in debt and became one of the fans who were virtually present at the father’s match.

The matter is not limited to one presence. The guy at the age of 5 is already getting used to the Celtics training with might and main.

“He’s a great passer. Sometimes he passes better than his father, – Grant Williams assessed the talents of the young talent. – To be honest, Jason has recently added to this component. But Deuce is not far behind. He can dribble with both hands. His jump shot looks pretty good. But he started by simply handing out bottles of water and towels to us.”

Jason, despite his love for his son, either because of the fear of competition, or because of a serious approach to education, makes every effort to make the guy understand as early as possible that he should not expect concessions in the NBA.