On December 26, 2004, a powerful earthquake occurred in Southeast Asia, and then a tsunami. The disaster claimed the lives of more than 200 thousand people. Then the story of the Indonesian boy Martounis Sarbini thundered, who spent several weeks at sea, but survived. He was a fan of Cristiano Ronaldo, and after the whole world found out about Sarbini, he became friends with an idol.

We tell the story of Sarbini, who tried to play in Portugal, and now he is gaining views on YouTube and even tries out in politics.

The 2004 earthquake was one of the most powerful in history. The wave even reached South Africa

Kamchatka in 1952, Chile in 1960, Alaska in 1964, Japan in 2011 and the countries of Southeast Asia in 2004 – over the past 100 years, only five earthquakes with a magnitude of more than 9.0 have been recorded. What happened 18 years ago is perhaps the worst, as it happened in one of the most densely populated regions of the Earth. Hence the monstrous victims: if in March 2011, fifteen thousand people died in Japan, six years before that, from 200 to 300 thousand drowned or died under the rubble. On December 26, 2004, powerful aftershocks destroyed the cities of Indonesia, Thailand, Malaysia, Myanmar, Bangladesh and other countries. And later they were covered by a series of 30-meter tsunamis. 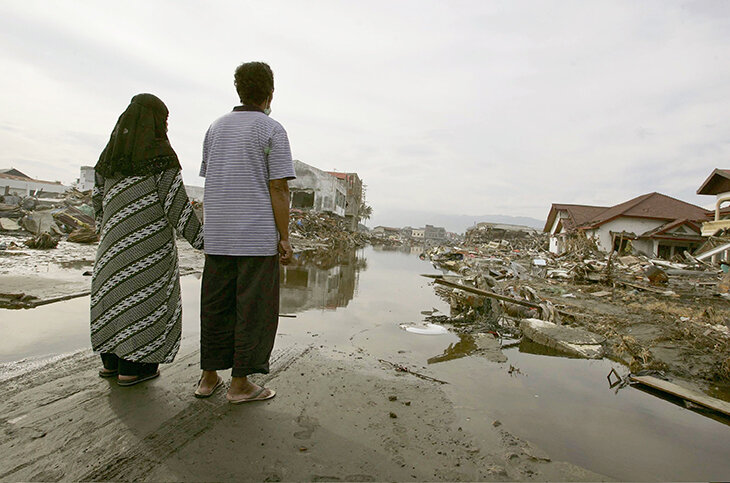 The epicenter was in the Indian Ocean – 160 kilometers west of the island of Sumatra. The magnitude was 9.2, and the amount of energy released was 110 picojoules. This is about the same as 1,500 atomic bombs dropped on Hiroshima. The tremors were so strong that they were felt in western India and Australia, and the tsunami wave reached Kenya, Madagascar and even South Africa. To the Republic of South Africa, its height was 1.5 meters, but even there two people died because of it.

Most of the victims were Indonesians – about 130 thousand. 35 thousand lived in Sri Lanka, 12.5 thousand – in India, more than five – in Thailand. Bodies washed ashore even a few months after the tragedy. For example, in the summer of 2005 in Java, rescuers found the corpses of a hundred people. 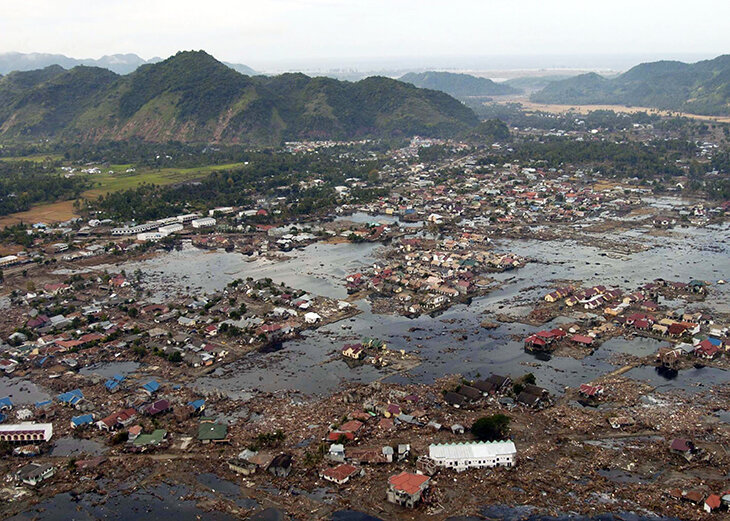 The consequences of the tsunami turned out to be a serious economic and social test. In India and Sri Lanka, more than a million people were left homeless. Diseases broke out in different parts of the region, which led to new victims. The total material damage of the disaster was estimated at $34 billion. But even in such chaos, there was good news. For example, the civil war ended in Sumatra. Armed rebels in Aceh have fought for independence since the mid-1970s, but negotiated a peace deal with the government after a devastating earthquake.

The tragedy in Southeast Asia is thousands of dramatic and sad stories, some of which have become known to the whole world. This happened to the Indonesian Martounis Sarbini, who was born in the city of Banda Aceh in Sumatra. According to one version, on December 26, 2004, a seven-year-old boy was going to play football with his friends. Martunis was in a singed T-shirt of the main childhood idol – Cristiano Ronaldo. By that time, Krish had already played for the national team and took the silver of the home Euro. Sarbini wore just the jersey of the Portuguese national team. 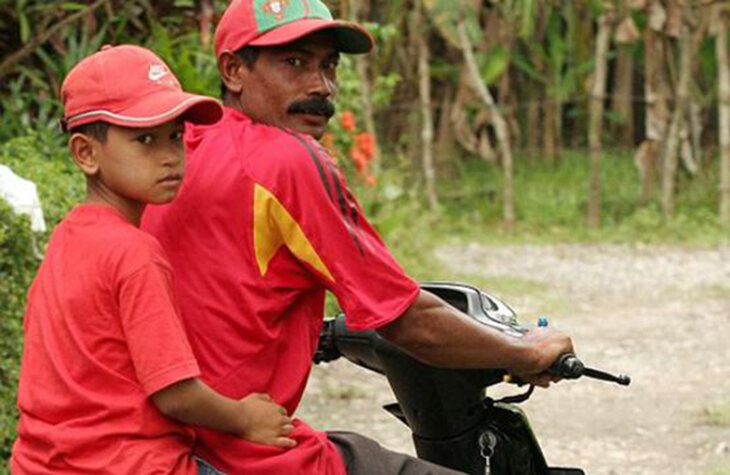 To save themselves, they, along with their mother, brothers and sisters, got into a neighbor’s car, but failed to leave. The car began to sink, the family tried to get out, but only Martounis succeeded. The wave immediately threw him aside, and soon he was in the open sea. Sarbini did not know how to swim, so he clung to everything that was nearby. At first, the trunk of an uprooted tree kept him afloat, then an old mattress, but for the longest time he clung to a chair.

In the sea, he was looking not only for something floating and reliable, but also edible. He was lucky to find packages of noodles that were dragged from the shore by a wave. There were water bottles. This went on for three weeks, but by the 19th day the supplies ran out, and, as the boy himself recalled, at this moment he had the hardest time. In addition, a terrifying picture surrounded him: debris of houses, garbage and dozens of dead bodies floated nearby. 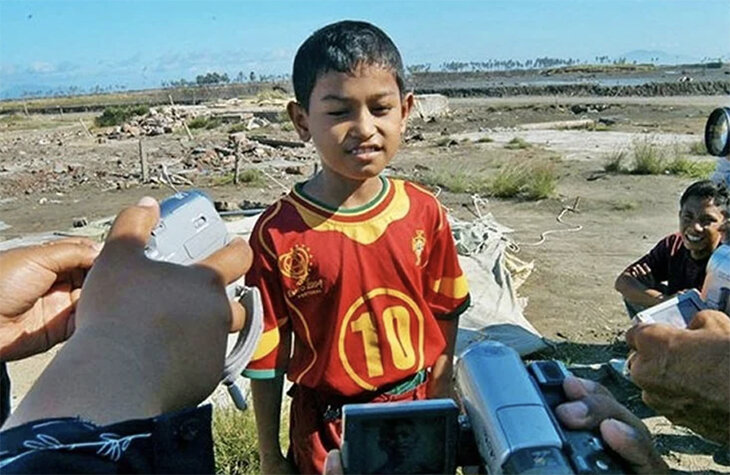 On the 21st day he was rescued. Martounis was washed ashore, where he was immediately fed and watered by the locals, and then examined by doctors. Almost immediately, fame came to him. British journalists who happened to be nearby filmed a report on the consequences of the tsunami and told the story of a miraculously saved child.

In Indonesia, Ronaldo is called the adoptive father of Martounis, although this is not the case. In 2015, the guy was called to Sporting, but an injury prevented him from playing

The footage from the report was viewed around the world. Many were impressed by the steadfastness with which the boy lived through the terrible days. He himself said that the hope to see his relatives and love for football helped him not to despair. Fortunately, Martounis’ father survived, but the house was destroyed. Sarbini’s sudden fame helped restore him. The story of a young fan of Cristiano Ronaldo reached Lisbon, so the construction of housing for the boy and his dad was financed by the Portuguese Football Federation. 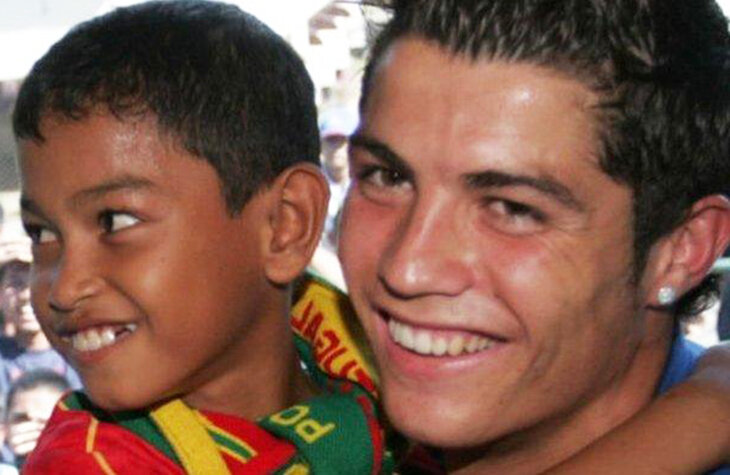 Soon Martunis met with football idols. Sarbini met with Luis Figo, Nuno Gomes, Luis Felipe Scolari, but Cristiano Ronaldo, with whom he first spoke in the summer of 2005, made the strongest impression on him. Today, Indonesian media sometimes return to this story and regularly refer to Martoonis as Krish’s adopted son. Naturally, the Portuguese did not take custody of the Indonesian boy – if only because his real father is alive. In addition, their age difference is 12 years. Periodically, the phrase “godfather” flashes in the texts, which is especially ridiculous, given that Sarbini, like most people in Indonesia, is a Muslim.

Nevertheless, it is clear that the meeting with Martounis was for Ronaldo something more than just another act of charity. They saw each other regularly, Cristiano gave gifts, invited them to his place, promised to help with his football career and strongly recommended learning English.

Sarbini was really close to a professional contract: in 2012 he got into the academy of one of the clubs in Sumatra, and in 2015 he was called to the youth team of Sporting. They wrote that in order to play for Lisbon, the striker received a Portuguese passport, but he himself denied this. A knee injury and problems with adaptation prevented him from gaining a foothold in Europe. As the Indonesian later said, English was not particularly useful to him, because his team consisted mainly of Brazilians and Africans, who hardly understood him. 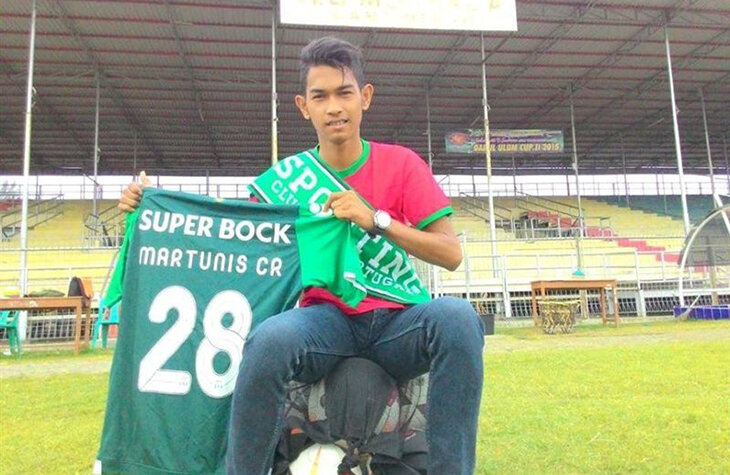 At Sporting, the player was paid $440 a month, later the amount rose to $660. The increase may have let him down: Sarbini’s contract was for a year, during which time he received offers from the United States and Qatar, but rejected them due to less attractive conditions. True, after a knee injury, there was only one option left to continue his career – to go home.

Now Sarbini is a YouTube blogger. There are 320,000 subscribers on his channel, and the most popular video is a piece of the store’s broadcast on the couch.

The striker treated his knee in Jakarta, but hoped to continue his football career, albeit at home. The plan was this: to enter the police school in order to get into the Bhayangkara club. This team is under the patronage of the Ministry of Internal Affairs, played in the major leagues and in 2017 won the championship gold for the first time. Sarbini did not manage to play for her – he failed in the exams. 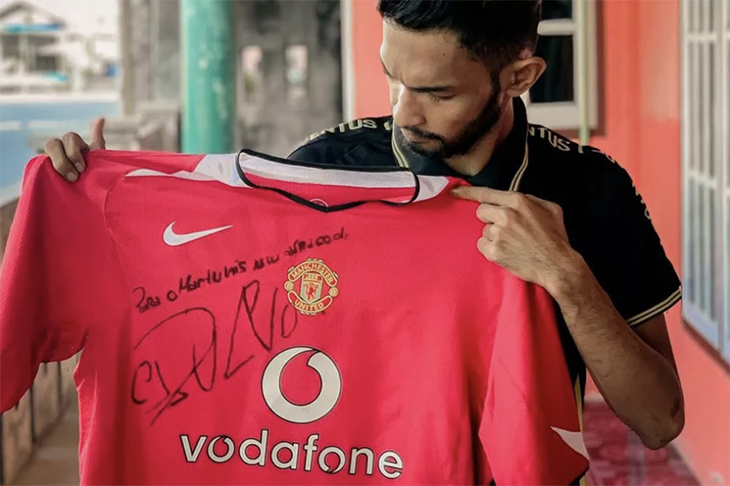 Having finished with football, Martounis became a video blogger. The first videos on his YouTube channel appeared in 2017, and today 320 thousand people have subscribed to it. Almost all content is in Indonesian, and, apparently, Sarbini could not decide on the format and genre for a long time. Either he releases a cover of a song by the local rock band Noah, or he records a vlog from a trip to Jakarta, but videos about Cristiano and his friendship with him brought him popularity. Even the channel is called Martunis Ronaldo, and almost everything that comes out on it is somehow connected with the Portuguese.

The most popular video has almost 6 million views. This is a recording (and directly from the smartphone screen) of a live broadcast of a Singapore store on the Shopee couch. Krish was a guest star, and the presenter invited people to the studio whom Ronaldo had once inspired. Among them was Martounis. Cristiano’s reaction to the appearance of an old friend (and at the same time to the creepy dance with phones) can be seen here:

By the way, this dance also has a full-fledged remaster, where Cristiano Ronaldo danced in the Shopee advertisement already at the stadium.

Martunis also posted a video from a trip to Italy to the Juventus match, when Cristiano played for Turin (1.9 million views) / True, the rest of the videos are gaining noticeably less and mainly consist of chatter about the game, motivation and, of course, friendship with Ronaldo.

To overcome obsession with Krish, a new hobby of Martounis should help. A year ago, he entered politics when he joined the Indonesian Democratic Party, an opposition movement that, however, is represented in parliament.

Sarbini is 25 years old, he still has a lot ahead, although now it seems that the main events in his life have already happened.