More than 20 thousand fans asked Alvarez to break up with his girlfriend. What happened?

The Biathlon World Cup stage in Germany began with chaos: during the men’s individual race at the Ruhpolding Stadium, electricity was cut several times.

Everyone suffered: the athletes faced problems at shooting, the organizers – with criticism, and the audience – with interruptions in the broadcast. 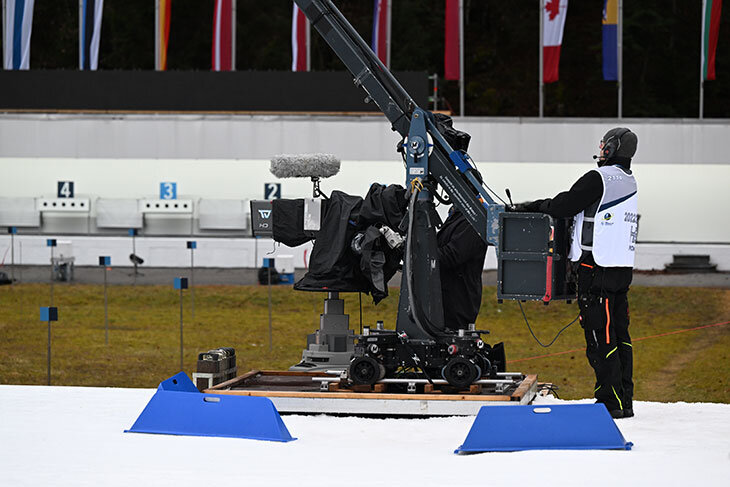 The broadcast was interrupted several times (filled with commercials and a story about Neuner), and backup power saved the race

The fifth stage of the World Cup is already taking place in difficult conditions: there is almost no snow, and the one that is is in poor condition due to the positive temperature. Biathletes compared individual sections of the track with a swamp.

In the middle of the race, power suddenly went out throughout the stadium. The light over the targets was gone, the cameras were turned off and even the sevidata on the official website of the International Biathlon Union (IBU).

According to preliminary information, problems with a transformer substation near the arena turned out to be the cause of the failure. 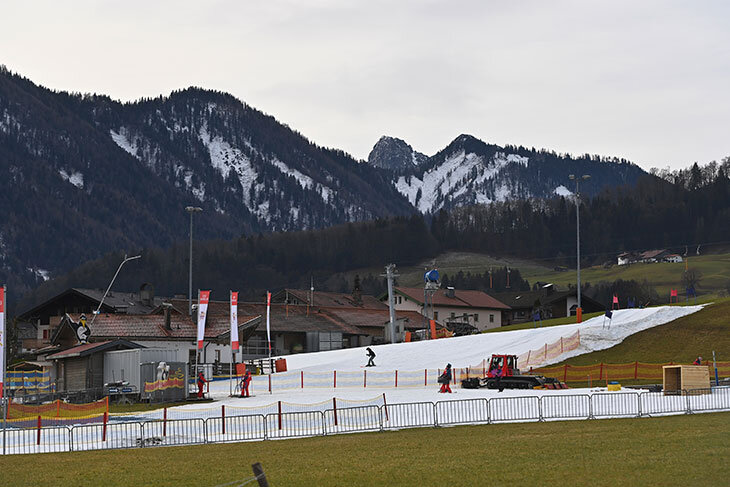 The only thing that worked properly was the measurement of time at cutoffs. The timing at the World Cup is insured against such incidents, it is maintained with a spare battery.

“Since the timing is the heart of the competition, there is a separate battery system for it, we always have a reserve of 10-12 minutes. We almost exhausted it during the race, but we were able to record the results,” explained IBU sporting director Daniel Boehm.

It was more difficult to ensure the broadcast – the picture disappeared, so everyone was looking for a way out as best they could. The Norwegians kept the radio broadcast on NRK (it was carried out using mobile Internet), and TV2 switched to the studio with expert Petter Northug. The German ARD in the first forced break showed a story about Magdalena Neuner, in the second – about Michael Greis and Tura Berger. Eurosport included retro compilations and advertisements.

There was a black screen on the IBU website at that time.

NRK expert and 8-time Olympic champion Ole Einar Bjoerndalen admitted that this was the first time in his long career in biathlon that he had encountered this:

“It was hopeless. I could just go home, there was no need to stay. Suddenly the power came back and we were able to comment on the race for a few minutes and then everything disappeared again. It was like a parody.”

And where did Domracheva and Bjoerndalen disappear to? They were fired from China, noticed in Minsk – but it seems that the couple already lives in Monaco

German commentator Christian Dexne was helped by the phone (already after the resumption of the broadcast): “Now I am commenting from my mobile. The energy crisis has reached Ruhpolding, there is not enough electricity. The lights in the windows also went out.

The IBU could have annulled the results, but everything remains in place

The organizers seemed to be confused. The IBU reported on the situation on social media: “We are sorry if you see a black screen and cannot update the data in the app or website.” 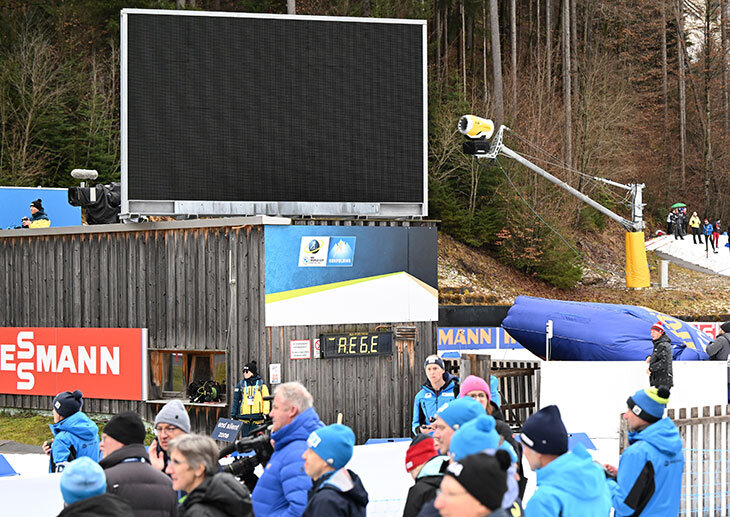 The broadcast was interrupted twice for several minutes, but the IBU did not switch, for example, to text coverage of the race, but simply waited for troubleshooting.

In the review of the competitions on the IBU websites and the World Cup in Ruhpolding, the situation is mentioned in passing: “some problems with the electricity” and “the live broadcast, unfortunately, was interrupted at times due to a power outage.”

❌ The Belgian biathlete pointed the muzzle of his rifle in his face. Why wasn’t it taken down?

The results were taken more seriously – the judges discussed the possibility of annulment:

“After the race, as usual, there will be a jury meeting. Then we must listen to the athletes who have been affected by the power outage. This will affect the assessment (of the situation). This did not affect the fixing of the time, so now the results are official. But it is necessary to evaluate everything and hear what the injured athletes say.

This is a very unfortunate situation. We are looking into what happened right now. We have not yet found the cause of the shutdown, but we will find out today so that this does not happen again, ”Böhm explained.

In the end, the jury upheld the results, although not all athletes agreed with this.

Biathletes blame the organizers and joke about unpaid bills

The cause of power outages will certainly be found out, and the circumstances of the race will be forgotten – only the result will remain. But many were outraged by the extraordinary situation.

• Johannes Bo won another victory, although he did not believe in it after the second miss. The Norwegian started 3rd, so he shot with light, but the problems of his opponents spoiled the impression of victory

“It’s a pity that it happened. I admit, the aftertaste is not very pleasant. I was lucky with the starting number and with the light. It is always sad when things happen in the stadium that affect the result. This, of course, also applies to power outages.”

“Maybe I look older than I really am.” If you knew Johannes Bohr as a rock star, forget it.

• Sturla Holm Lagrede finished 4th as it all came to a head at the last shooting range, where he had a single miss. It was at this time that once again the lights went out over the shooting range.

“The shooting went well, I felt that I was in control, but on the last shot the lights went out, it was difficult to see the target. Here is such bad luck. The focus shifted from shooting to trying to see the targets. Distinguishing black from gray is much more difficult than black from white. It was hard. I was lucky that I got off with one miss.

Power outages are the fault of the organizers. They have to fix it.”

When asked whether the fate of the race was decided by the fact that Johannes Bo was lucky with the light, he answered philosophically: “You can speculate on this, but everything was as it was. Maybe next time the electricity will go off for him.” 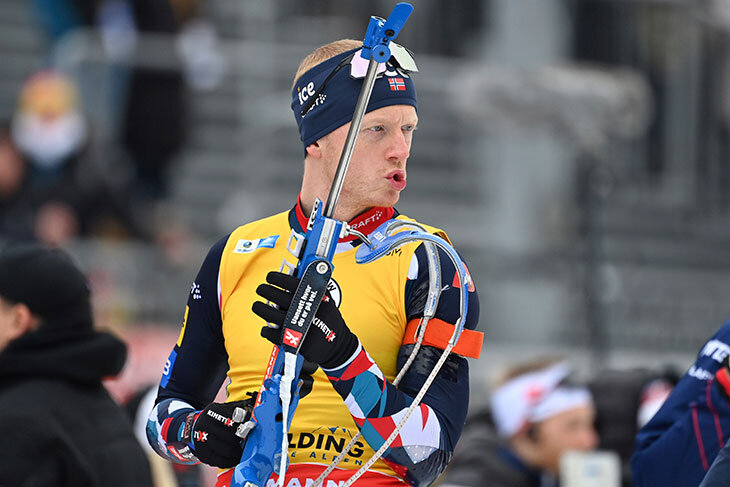 • Vetle Sjöstad Christiansen finished second and also forfeited the win with a miss at the last shooting range, but it wasn’t the lack of light that was to blame:

“The slip was not caused by electrical chaos. The last shot is the devil in biathlon, something like a penalty kick in the final of the World Cup, the same consequences. I didn’t score a penalty today.”

Although the situation with the light surprised him too: “In biathlon, everything is rarely fair, but such unforeseen things should not happen.”

• But Tarja Bo was lucky – the electricity went out immediately after his shooting:

“We could shoot, it was just a test for which we did not prepare. I was told that the electricity went out, but that was after my shooting. I most of all feel sorry for those who fired when there was no light.”

• Germany ‘s Benedikt Doll finished 6th with one penalty and even joked, “They just didn’t pay their electricity bills.”

• But his compatriot Roman Rees complained about the unfairness: “When I was on my second prone, the lights on the shooting range were turned off. It was too dark, uneven conditions. I made a mistake. It’s just not fair.”