Brought the old man to tears.

As a rule, coaching changes are logical, and there is no room for doubt in them. If the team collapses, loses a lot, and there is no light in sight, dismissal is inevitable. But the resignation of Bruce Boudreau from Vancouver stands out from the crowd. Of course, the Canucks did not play well, the team had problems, but this is the case when general manager Patrick Alvin and vice president of hockey operations Jim Rutherford should have no less questions than a coach.

The club made some kind of series or reality show out of Boudreau’s dismissal. Back in November, Rutherford publicly criticized the coach on Sportsnet 650 radio for his playing style and poor performance at training camp. This was one of the signals that the relationship between the management and the coach was damaged. However, no personnel decisions followed after that – Boudreau remained, but rumors of his resignation continued to surface regularly. 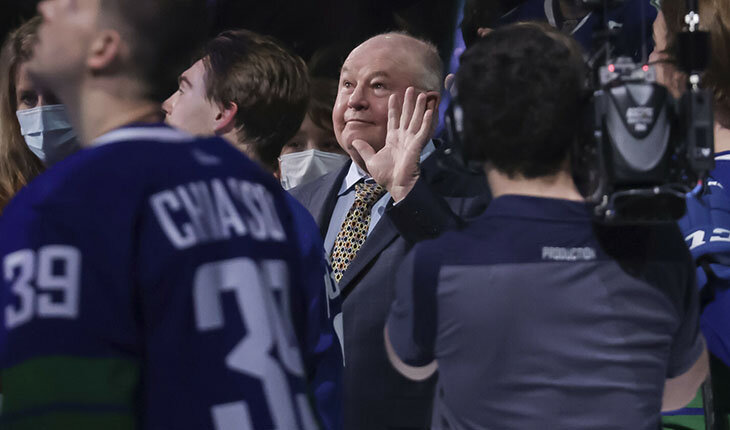 This topic has become especially active in recent weeks. Vancouver have lost 10 of their previous 12 games, and Rutherford himself confirmed in a press conference last Monday that he had spoken to potential head coach candidates. Just a week ago there were rumors that Rick Tocquet would become the new head coach. It looks the most ridiculous.

At the same time, one must understand that Boudreau appeared at the club shortly before the appointment of Rutherford. In the course of last season, Bruce was hired by club owner Francesco Aquilini. The team under his leadership did not reach the playoffs, but scored 32 wins in 57 games, stopping only five points from a place in the wild card.

However, it was Jim who discussed the future of the coach at the Canucks and agreed with him about work in the 2022/23 season. No one knows where and when a black cat ran between them, and why, all of a sudden, already in November, Rutherford began to make attempts to get rid of Boudreau. In fact, in the offseason, he could easily hire another coach, but he himself told the press that he wanted to see Bruce at the helm of the team.

But in the course of the season, some kind of game began. Recently, there have been so many rumors about Boudreau’s imminent departure that reporters have been asking the coach on a daily basis what he knows about it. As a result, from far from the last coach in the history of the league, who has been working on the bench for about 30 years and 15 of them – the main one in the NHL, they made a laughingstock.

Every day he picked up some new words to explain his feelings, and every time it was clear that Bruce, at 68, did not want to part with work at all, and would still give odds to many young people. But instead of focusing, enjoying work and benefiting the organization, he is forced to explain every day that he is not a fool, that he reads the news and sees everything that is discussed, but continues to do his job, despite the lousy mood.

In this situation, it is not even surprising that Bruce was supported by the fans, despite the depressing results of the team. In the showdown between the leadership and the coach, the Vancouver fans took the side of Boudreau. They clearly do not like what the Rutherford-Alvin tandem is doing with their favorite team. In the last match against Edmonton, the fans already understood that Boudreau was about to leave, and in the last seconds of the game they chanted his name. Tears welled up in the eyes of the coach – it was a very touching moment.

“You never know if it’s the end,” the coach said at a press conference. “When you’ve been in this business for almost 50 years, most of your life, and if this is the end… I had to stay there and just look at the fans and try to say to myself: “Okay, remember this moment.”

I just wanted to enjoy the view of the stands because who knows if I’ll ever get that chance again. And I’ll just keep it in my mind, in memory.

Of course, the Canucks had formal reasons to fire Boudreau. The team has lost 10 of their last 12 games, is 18 points behind third in the division, is second from the bottom in goals conceded (182) and has the worst minority in the league (65.9%).

But here again questions arise for managers. If the team has almost no problems in attack, then in defense it is just terrible. The blame for this lies also with the leadership, which in the offseason worked mainly on strengthening the attack. The only rookie defensemen appeared in the team only in October – Reilly Stillman and Ethan Beer, before that only players in the AHL signed.

Plus, add that the main goalkeeper Thatcher Demko has not played since December 1. As a result, Boudreau’s mistakes were supplemented by a clear flaw in managers and unfortunate coincidences. And the last, and very ugly, made the coach. In theory, probably, it was possible to resolve the issue by inviting a good assistant who would establish defense, but the club decided in its own way.

Now it’s up to Rick Tocquet to handle the situation, who needs to jump above his head against the backdrop of the universal love of the Canucks fans for the former coach. Rick is a great assistant, who is familiar to Rutherford from working together in Pittsburgh, where Tocquet won two Stanley Cups as an assistant. However, his experience as a head coach is not the most successful – a total of 6 seasons and only one entry into the playoffs in a pandemic year, when the league did not finish the regular season, and 24 teams took part in cup matches instead of the usual 16.

The updated headquarters included Sergey Gonchar, who will be the coach for the development of defenders – this is the same position with which he began his coaching career in the NHL in the same Pittsburgh.

The prospects of Russian players in the Canucks system will certainly be reflected in these appointments. Gonchar is unlikely to influence the progress of Andrey Kuzmenko, Ilya Mikheev and Vasily Podkolzin. Just because they are forwards, and Sergei has a completely different area of ​​​​responsibility. And Podkolzin has been playing in the AHL for almost two months. Although, probably, at some point he will certainly simplify the communication between the guys and the rest of the headquarters.

But Tocquet is an adherent of defensive hockey. To some extent, because of the defensive play, the team had so many problems, so in this sense, the appointment should benefit Vancouver.

What will happen to ours? Will Andrey Kuzmenko be able to maintain the previous performance? It is obvious that the new coach will affect the deal in the negotiations for his next contract. It is quite possible that the style of the new coach would be better suited to Ilya Mikheev, who has more defensive skills than Kuzmenko. As for Podkolzin, he found his game in the AHL, has been steadily gaining points lately and will probably soon receive an invitation to the starting lineup.