Answers to the main questions.

At the end of 2022, Cristiano Ronaldo moved to Al-Nasr. At the presentation, he said that he wanted to quickly play for a new club, but he only watched the first match in 2023 from the stands.

Why didn’t you make your debut quickly? And when will it happen?

In the first game after signing the contract, Ronaldo did not play, but saw Talisca’s double live

If he had made his debut right away, he should have done it in a home match on January 5 against the Al-Thai club (ranks 7th in the table after 11 rounds). But at first the match was postponed for a day due to heavy rains and problems with electricity at the stadium, and then Ronaldo still did not get into the application. 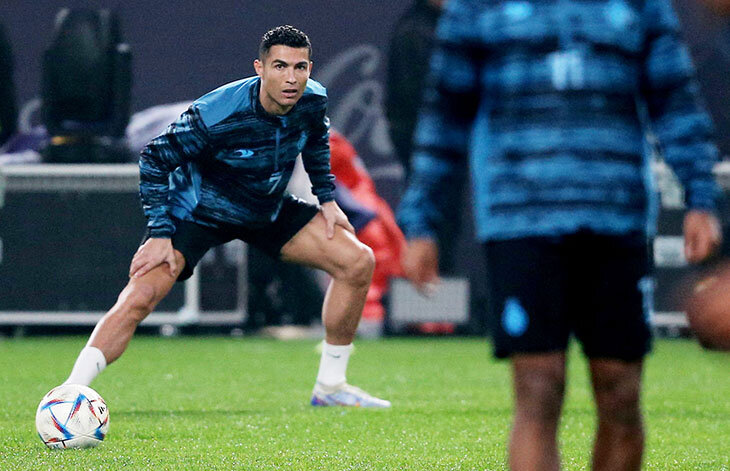 Cristiano himself, along with his personal manager Ricardo Regufe, was seen in the box of the Al-Nasra stadium before the game against Al-Thai. And then he gave a standing ovation to Talisca’s goal.

Al-Nasr won 2-0 – Taliska scored twice, scoring for the second time from a pass from goalkeeper Ospina. Al-Nasr will certainly keep the lead, now the team has 29 points, Al-Shabaab and Al-Hilal have 25 points each and the match is in reserve.

According to the Daily Mail, Ronaldo left the stadium during the break. I only watched the first half. True, Al-Nasr denied everything: Ronaldo moved to the locker room , where he worked on an exercise bike. And celebrated the second goal, continuing to watch on TV.

Al-Nasr’s next match is a derby. It is not yet clear if Ronaldo will play

It will be much more interesting if Ronaldo plays the first match in the next round on January 14th. On this day, Al-Nasr will play on the road against Al-Shabaab – the first team of the championship is away from the second. Also a derby.

They last met in May and scored six goals for two (Al-Nasr won 4:2). In October, even the women’s teams had fun – their derby ended 3:3.

But the exit of Ronaldo on the field remains in question. The story is to blame when Cristiano, while still playing for Manchester United, broke the phone of a boy with autism. Ronaldo received a two-match suspension in England, which he has not yet served.

According to FIFA regulations, if a suspension for up to four matches or up to three months has not passed, then the player must serve it in a new club, so the ban is transferred directly to Saudi Arabia. No one cares that the incident itself happened nine months ago.

According to the Daily Mail, Al-Nasr was looking for a way to circumvent the ban, even if it would result in a heavy fine. 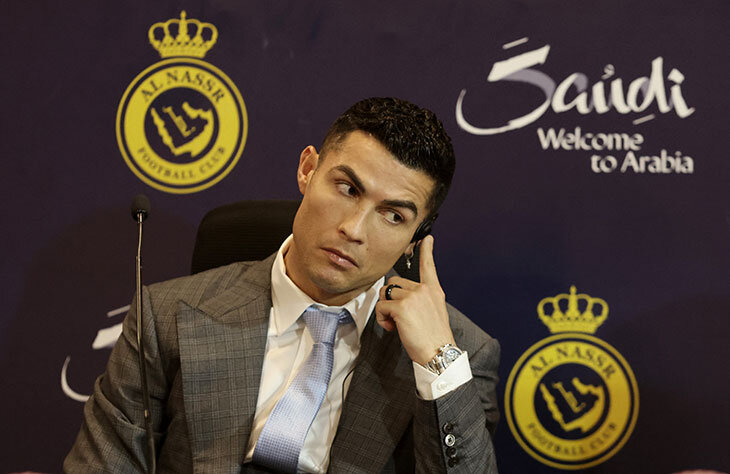 If Ronaldo serves a two-match suspension, then he will not play against Al-Shabaab either – he will appear only on January 22 in a home game against Al-Ittifaq (11th place at the beginning of the month). You may have to wait a couple more weeks.

AFP, citing a source, said that Ronaldo could not yet be registered in the championship. The reason is the limit on legionnaires, which should be no more than eight. There were just eight of them in Al-Nasr: the Brazilians Taliska and Luis Gustavo, the Colombian Ospina, the Spaniard Gonzalez, the Ivorian Conan, the Argentine Martinez, the Cameroonian Abubakar and the Uzbek Masharipov. Ronaldo is ninth.

To register Ronaldo, you must either sell someone or terminate the contract. “Negotiations about the departure of players are already underway, but they have not yet reached the final stage,” – AFP information.

Half of the legionnaires came for free in the summer of 2022 – these are Ospina, Conan, Gonzalez and Luis Gustavo. Three more appeared in 2021 – Abubakar, Masharipov and Taliska. The main veteran among the legionnaires is Martinez, who moved to Saudi Arabia in 2020.

Martinez and Masharipov played least of all this season in the Saudi Arabia League. The Argentine appeared only in the last two matches of 2022 (and missed ten months in 2021 due to a torn cruciate ligament). Masharipov was also seen in two games, but one of them was right in front of Ronaldo against Al-Tai. The remaining six legionnaires regularly appear on the field.

According to Okaz, Abubakar could go on loan to Manchester United. That would be the plot.

Even last season, clubs could register a maximum of seven foreign players. Now there are eight, but seven foreigners get into the application for the game. 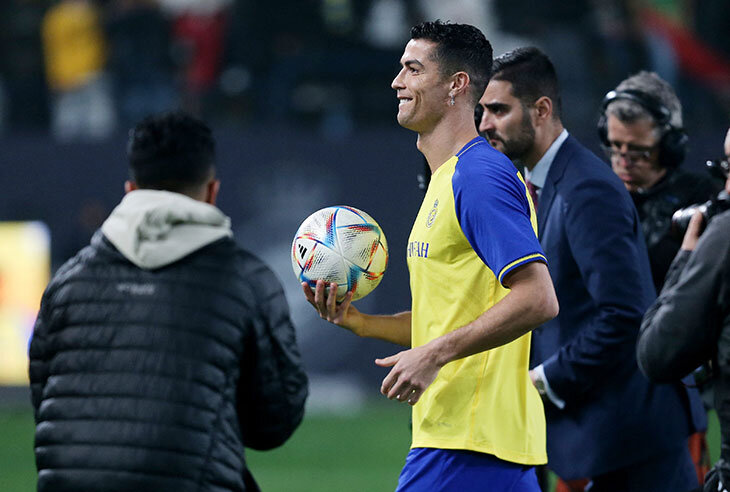 Al-Nasr could not register Ronaldo due to finances. Looks like it’s because of the Juliano case.

Journalist Romain Molina reported that the club was under FIFA sanctions due to previous transfer debts. That is why he could not register Ronaldo. “As if by magic, Al-Nasr suddenly paid off all the debts, so that Ronaldo can be officially registered,” Molina added.

Probably, the registration of Cristiano was slowed down by the ex-player of Zenit Giuliano. He played for Al-Nasr for two seasons from 2018 to 2020, and the club owed him six million euros.

This information is reported by Rádio GauchaZH and quoted by lawyer Marcelo Amoretti Sousa: “We filed a complaint against the club with FIFA, and it punished them with a transfer ban. A representative of the club contacted me and explained that the money was provided only in the last days. That’s why they managed to pay only today (January 5). FIFA then lifted the ban on transfers from Al-Nasr.

What lies ahead: Struggles in three competitions, but not in the Champions League

• Compete for the championship in the Saudi Arabian League. The club leads the league after 12 rounds, they scored the most and conceded the fewest. There are 18 more games to go. The last time Al-Nasr became the champion was in 2019.

• Try to win the King’s Cup. There – a quarterfinal against the middle peasant “Abha”. Al-Nasr has not owned this cup for a very long time – since 1990. True, it was not held from that year until 2008, but seven different clubs won in the last 15 draws, and Al-Nasr was not among them. 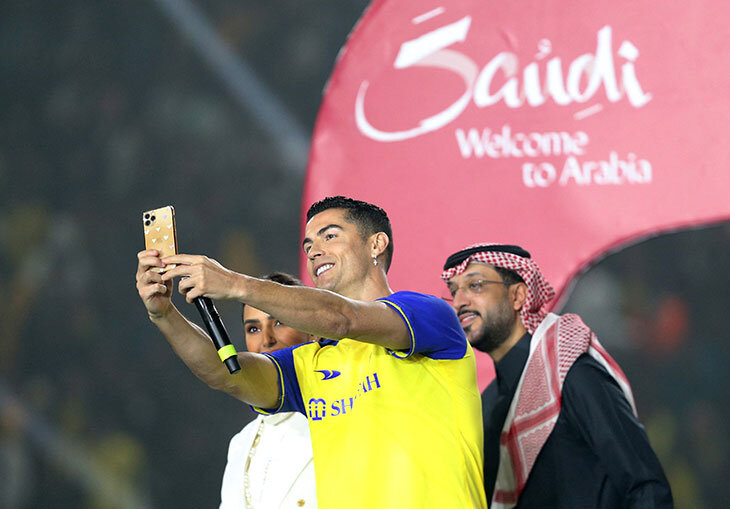 • Try to win the Saudi Super Cup. Four teams participate in it – the first three according to the results of the last championship, as well as the Cup winner. Al-Nasr will also play, because it finished third in 2022. The opponent in the semi-finals is Al-Ittihad (the second team of last season). Al-Nasr won the tournament twice and reached the final twice.

• Ronaldo will not be in the Asian Champions League playoffs. Simply because there is no Al-Nasr. In the 2022 Champions League, the country got the Cup winner, as well as the teams that took first, second and fourth places in the 2020/21 season of the Saudi Arabia League. Why was there a fourth? Because the third one didn’t get licensed.

Al-Nasr then generally became the sixth, but it lacked a couple of points to fourth place. And in the AFC Cup (the second continental tournament), teams from the Asian top championships do not play.

So Ronaldo will only play in Saudi Arabia for the first time without traveling to other Asian countries.